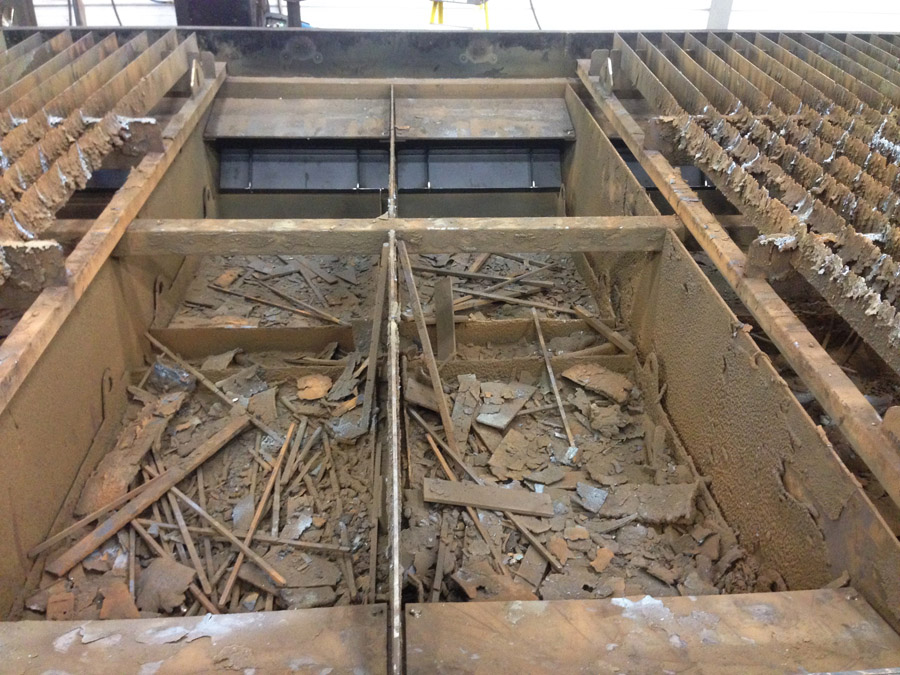 Metal fabricators across America always have aches and pains that need soothing. Take the labor and cost of maintaining a downdraft air plasma cutting table for example. Most commonly, these cutting tables are not self-cleaning, which means the operator is responsible for carrying out the arduous task on a fairly regular basis.

Depending on the hours of cutting per month and the accumulated slag inside the table, cleaning is often required every four to eight weeks. This equates to the plasma cutting operation halting production for maintenance – anywhere from half of a day up to an entire day, at least six times per year.

The plasma cutting arc produces a large volume of molten slag that pours over the slats supporting the metal being cut. After weeks of production cutting, the slats can become so coated with slag that they actually grow wider until airflow into the table is blocked. Timely slat maintenance is required to ensure that the metal is properly supported and airflow into the table is not restricted. Delayed table maintenance can lead to a shop filled with smoke and an unsafe environment for employees.

Typically, plasma cutting tables include multiple removable slag trays set inside the bottom of the table. When filled with slag and fallen parts, the trays are lifted out with a crane or forklift and dumped into a larger scrap bin.

If the table has removable slat frames, they are removed as an assembly to gain access to the slag trays below. If the table does not have slat trays, slats must be removed one by one. Generally, after weeks of cutting, the slats are practically “welded” into the frames. 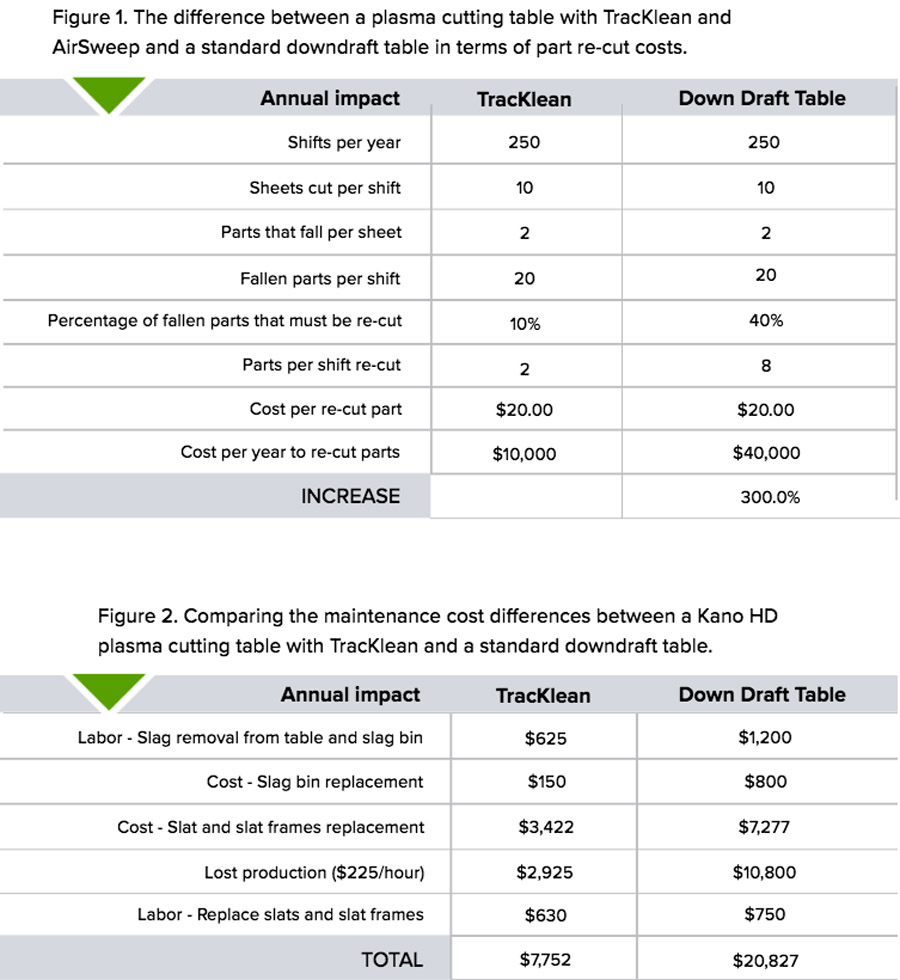 When cutting over the junction between the zones, adjacent zone damper doors are held open over a specific distance of gantry travel to ensure effective capture of the smoke left in the trailing zone. As a result, the effectiveness of the exhaust system is reduced until only one zone is open. Activation timing of zones is critical for certain applications, such as high-speed cutting of gauge metal and plasma beveling.

Anyone who has operated a plasma cutting table knows that several parts per shift fall into the table. Parts that fall between the slats and to the bottom of the table are subject to heat and spatter from the cutting process unless they are quickly retrieved.

To retrieve those parts, operators often go “fishing” with a magnet or metal hook. If a part cannot be successfully retrieved, it often remains in the bottom of the table until the next cleaning day, which could be weeks away.

When parts are retrieved, they commonly require significant and costly cleanup. Understanding the additional time and cost involved, often a fabricator will send the fallen part to the scrap pile instead of considering a re-cut. Forcing a part through manufacturing to catch up with its associated batch can cost a company hundreds of dollars.

To combat the hurdles associated with keeping a plasma cutting table clean, the team at Park Industries posed a simple two-part question: What if the cutting table featured a self-cleaning design with low-cost removable slat frames as well as a traveling exhaust car with the ability to rapidly retrieve a fallen part? And then the team designed it.

The functions of the TracKlean system can be broken into three parts: Track, retrieve, and park and clean.

The track soft key allows the car to “find” the gantry. The traveling car locates itself under the cutting torch and syncs to the gantry motion.

If critical parts fall through the slats and into the removable slag bin, the operator can pause cutting and press the retrieve soft key. The traveling car and slag bin move to the front of the cutting table in under 5 sec. Fallen parts can be quickly and safely retrieved. The operator presses the track soft key again to return the car to under the torch and re-sync motion with the gantry. The start button may be pressed to resume cutting.

When it’s time to empty the slag bin, the operator presses the retrieve soft key to bring the car to the front of the table. The slag bins are lifted out and dumped. The track soft key is pressed to return the car under the torch and re-sync motion with the gantry.

With a Kano HD plasma cutting machine with TracKlean, there’s really no excuse to put off cleaning the table. There is no slat removal required. It self-cleans in less time than it takes to microwave a small bag of popcorn. The operator presses the park soft key to move the car to the park location at the rear of the table. The operator then rotates two large pins that drop into place to engage the cleaning plow to the car. The clean soft key is then pressed and the plow travels to the front of the table in less than 30 sec. where the slag and debris can be quickly removed.

Regarding AirSweep, the traveling exhaust system was designed using computational fluid dynamics (CFD) software to optimize the airflow characteristics of the system and ensure all cutting fumes are captured right at the source – directly under the torch. 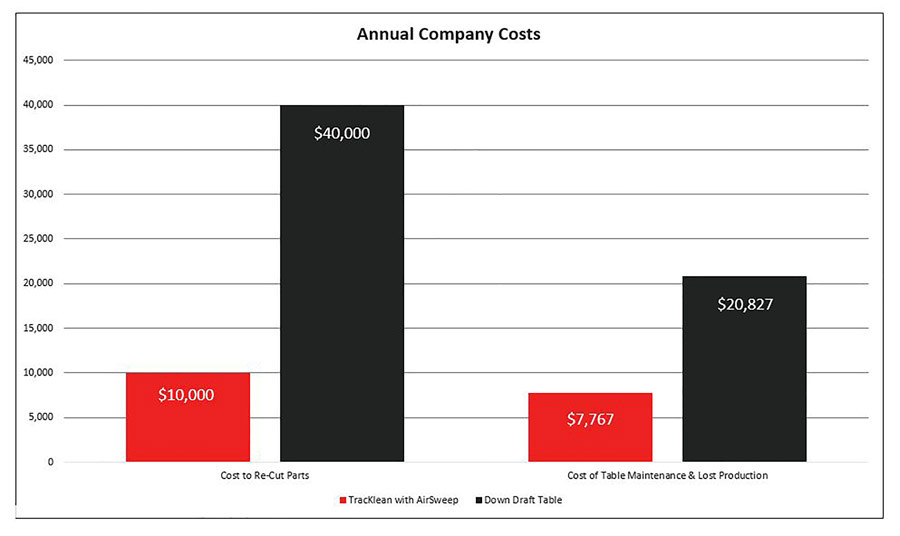 The retrieve function of TracKlean offers the opportunity to keep this percentage very low. Shown in Figure 1, Park Industries estimates the cost per part to be $20. This is a lower estimate than it would typically cost to re-cut a part. This number will be used to illustrate the difference between a TracKlean self-cleaning table with AirSweep exhaust system and a downdraft table.

The total cost to re-cut a part should include the potential of reassigning production personnel to other tasks until the part is available, reprogramming the CNC cutting files or a delay in shipping a complete machine to a customer.

All plasma cutting tables require a certain amount of regular maintenance. The best designs keep the labor and material costs to a minimum.

Once per week, TracKlean requires about 6 min. to plow debris from the table at an annual labor cost of $320 at $25 per hour. Annual labor costs to dump the TracKlean slag bin weekly total another $320.

Fortunately, the TracKlean plow can be cleaning the table while the plate is loaded or unloaded with almost no interruption to production. Manually cleaning a table requires cutting production to stop for up to eight continuous hours. Lost cutting time can cost a company as much as $225 per hour. These costs are laid out in Figure 2.

Figure 3 shows a comparison of the total annual costs for a company with the Kano HD plasma cutting machine with TracKlean versus a typical downdraft table with removable slat frames and lift-out slag trays. In the cost to re-cut parts comparison, the downdraft table costs 300 percent more than the TracKlean with AirSweep. In the cost of table maintenance and lost production comparison, the downdraft table costs 168 percent more annually. It is based off a 6-ft.-by-12-ft. cutting machine and a single shift per day operation.

As seen in the comparison, the Kano HD cutting machine with TracKlean and AirSweep has a lower cost of ownership, saving fabricators parts, labor and production time.