Bending pre-painted sheet metal parts or parts that are made of aluminum, stainless steel, brass, copper and other materials that are not going to be painted is likely to cause die marks. And the odds are good that customers will not accept them. Die marking is an age-old problem that historically had fairly limited solutions, and even those often compromised press brake productivity. 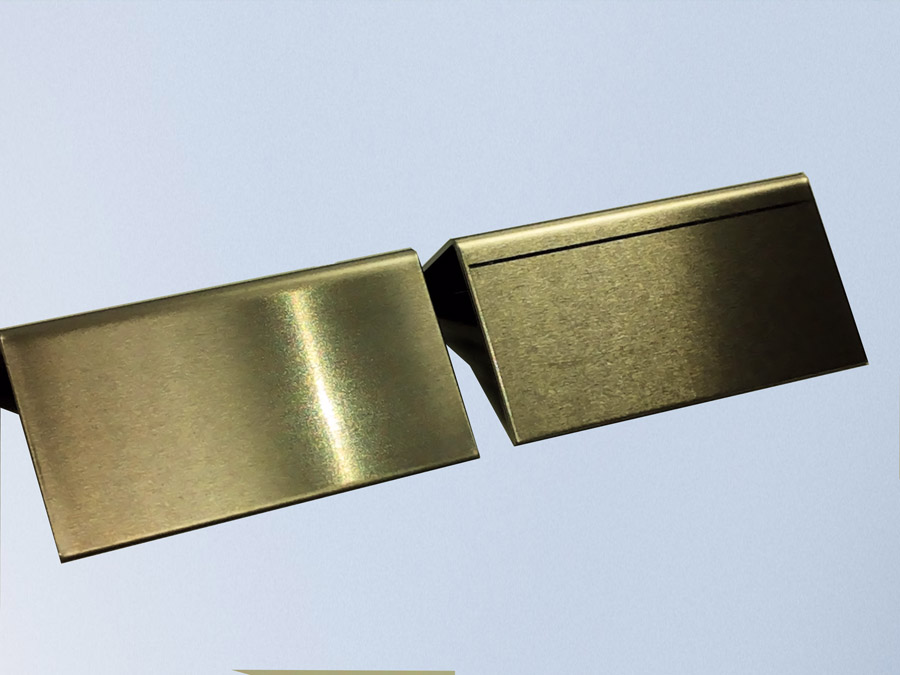 An early solution to alleviate this problem was to use die holders made from steel or aluminum that utilized a polyurethane pad, which served as the die. This method normally worked well – and still does – in eliminating die marks, but it comes with several inherent problems. They include the deterioration of the polyurethane pad during use, which creates the need for frequent angle adjustments. In addition, the pad tends to collect grit or debris that might find its way onto the sheet metal. As the residue becomes embedded in the pad, it causes die marking.

Also, because of the resistance that is caused by pushing the material into the polyurethane pad, the tonnage requirements to form the part increase significantly and reach very high tonnage levels. This is true when bending parts with tooling that presents a large surface area, such as large radius punches. And finally, polyurethane pads are expensive to use, especially when bending long parts as they have a fairly short life.

Another frequently used solution is polyurethane sheeting, which is typically sold in rolls of varying widths and thicknesses, in 100-ft. lengths, and in some cases by the foot. This product is normally attached to the ends of the die via C-clamps. When longer lengths are used, the center is normally secured to the die via duct tape, masking tape or similar adhesive tapes.

Polyurethane sheeting works well in preventing die marks, especially when used with a die that has large shoulder radii. However, the thickness of the sheeting reduces the width of the V-opening on the die and in doing so, can create the need to alter the blank size.

As it is draped over the die and clamped in place, the polyurethane sheeting must also be stretched to the bottom of the stroke with each bend, which increases the tonnage that is required to form the part. The combination of the material passing over the sheeting during bending and the stretching that the sheeting undergoes with each bend causes it to quickly wear. This creates the need for the press brake operator to frequently unclamp the sheeting and move the roll forward the length of the die to present a fresh section of sheeting over the shoulder radii of the die. While producing favorable parts, this process can be taxing on press brake productivity. 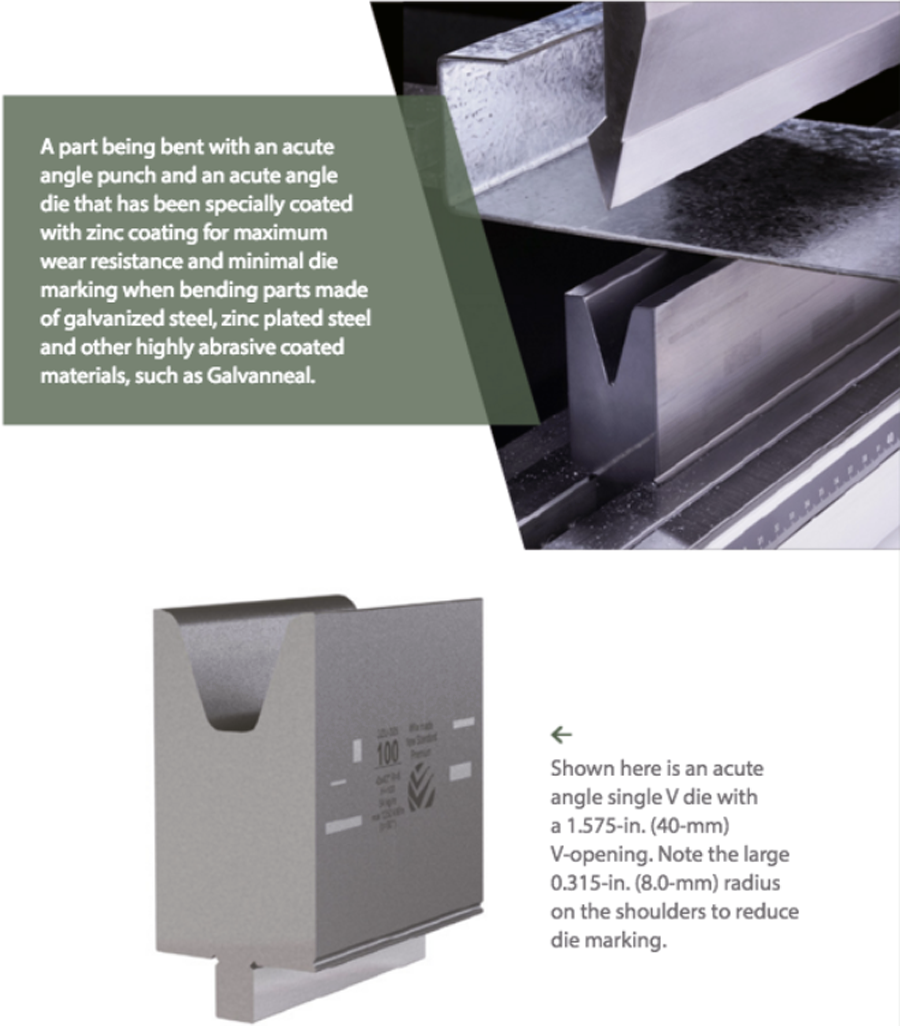 While material gouging is eliminated by the larger shoulder radii, that isn’t the only area of concern. A second stage of die marking is likely to occur. The material can be marred by metal-to-metal contact that occurs as the material slides over the shoulder radii on the die.The only way to eliminate the die marking that is created during this stage of bending is to place a protective barrier between the material and the die. 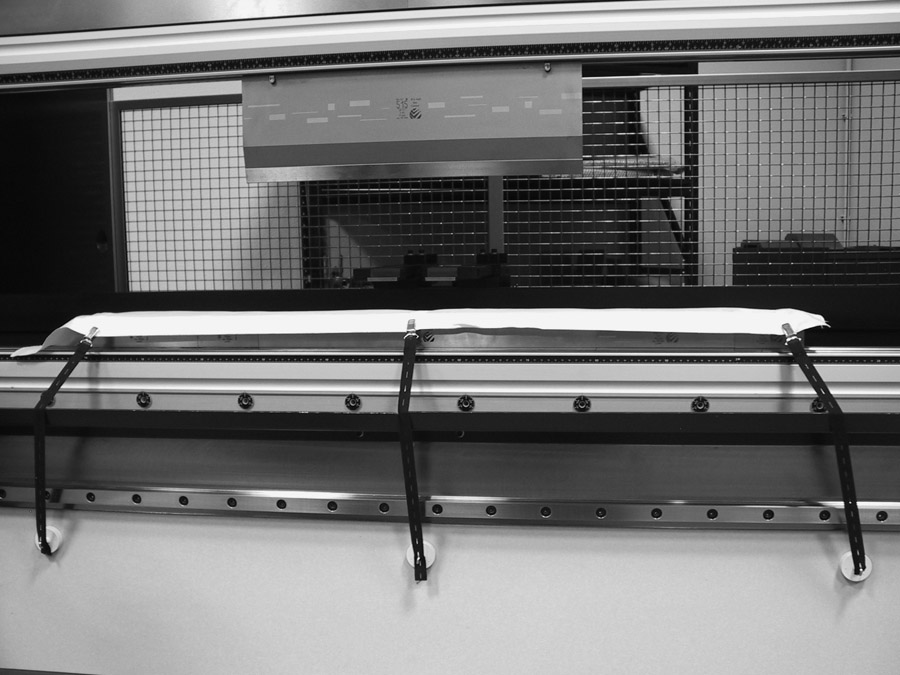 A No-Mar Cloth held in place by a magnetic clamping system.

A recent development in the fight against die marking is the use of a densely woven nylon cloth frequently referred to as “No-Mar Cloth.” Unlike polyurethane sheeting, the No-Mar Cloth is much harder and, therefore, far more durable, providing a usable life cycle as much as ten times longer than polyurethane sheeting. Being of a harder and denser material, it does not need to be stretched to the bottom of the stroke with every bend. 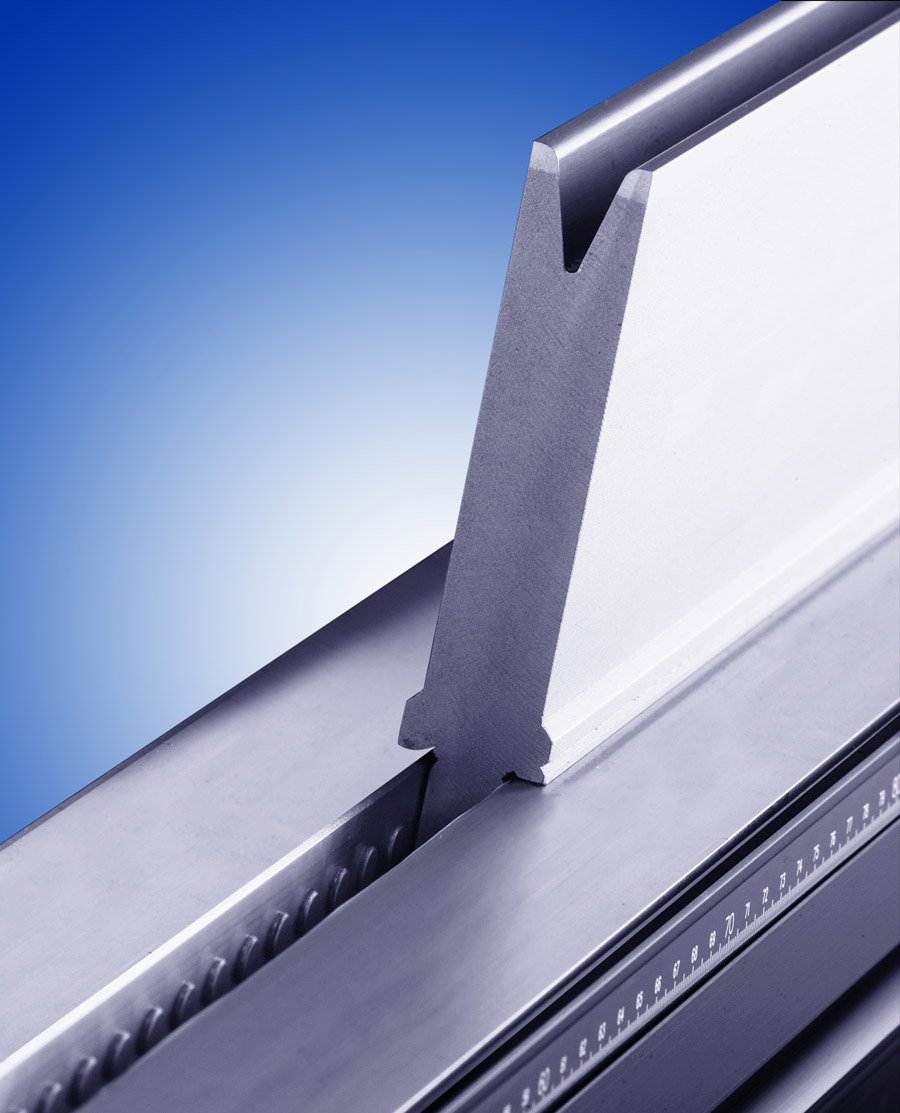 No-Mar Cloth is also much thinner than polyurethane sheeting being approximately 0.008 in. (0.2 mm) thick. Consequently, it has only a minimal effect on blank size. In most cases, the effect is so minimal that the sheet size will not need to be altered.

Like polyurethane sheeting, the No-Mar Cloth is draped over the die and can be held in place by C-clamps on the ends of the die with tape being used to secure the middle when bending long parts. It can also be held in place by a clamping system that was recently developed that uses straps with clamps on the ends to grasp the No-Mar Cloth and simple magnets to attach it to the die holder or the bed of the machine. This reduces the amount of time required to open and close C-clamps and to apply and remove tape from the middle of the cloth.

For sheet metal fabricators that make parts made from galvanized steel, zinc plated steel and other highly abrasive coated materials such as Galvanneal, technology has finally caught up. A new zinc coating is now available that provides a very fine surface finish that is exceptionally durable and results in reduced die marking and greatly increased die life.

With these new solutions to an age-old problem, users can expect fewer marred sheet metal parts and fewer rejected jobs.