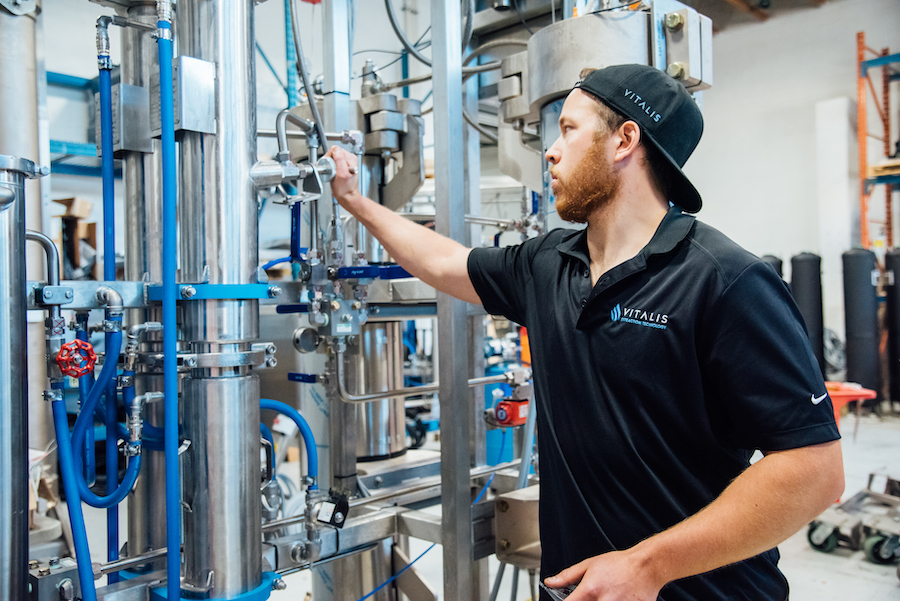 Perhaps you partook in college or high school. You might have cancer, Crohn’s disease, hepatitis C or any of a dozen or so other illnesses for which marijuana use is therapeutic. Maybe you just like to party. There are many reasons to use cannabis, some of which you might agree with, and others you might not. It’s clearly a contentious subject.

Whatever your views, however, few among us would argue one important point: marijuana is here to stay. It’s now legal for medical purposes in 33 states, recreational in 11 others (plus the District of Columbia) and it’s pretty much anything goes for our neighbors to the north. Additional cities, states, provinces and countries jump on the weed train with each legislative cycle.

Pete Patterson, chief operating officer and co-founder of Vitalis Extraction Technology, one of those northern neighbors, is helping drive that train. He and business partners Joel Sherlock and James Seabrook, have made it their mission to provide the burgeoning cannabis industry with extraction equipment that is easy-to-use, cost-effective to operate and produces predictable results.

Did I mention that it makes killer cannabis extract? At least, that’s what a friend told me. Marijuana’s not legal where I live, so I wouldn’t actually know.

Anyway, Patterson isn’t alone. The team at this British Columbia design and manufacturing company is now more than 100 employees strong and growing. Considering that Vitalis incorporated on Feb. 4, 2016, it appears that he and his partners made the right decision investing in what was then a far less socially acceptable business venture.

As Patterson describes it, “Joel and I were originally private equity investors and worked with several companies looking to acquire cannabis extraction systems, an effort that we helped facilitate. After repeated quality and lead-time problems, however, we decided to develop our own extractor line.

“Our plan was to subcontract the design and manufacturing to a third party, but we ran into some challenges there, as well,” he continues. “Long story short, we ended up talking to a mutual friend of ours, James Seabrook, a mechanical engineer with a great deal of experience in oil and gas extraction, which is quite similar to extracting resin from cannabis. Together, we decided it made sense to design and build everything in-house. That’s how Vitalis got started.”

How does cannabis extraction work, and why is Vitalis’ method better than others? Patterson explains that the process isn’t all that different than the processes used to make decaffeinated coffee, the hop extracts for beer making or the sweet smelling oils in perfume. These extracts, and many other concentrates, are produced by running a solvent (in this case, pressurized CO2) over a specific plant’s biomass (yep, you guessed it: marijuana). The solvent is then separated from the extracted oils, and voilà, you have cannabis concentrate.

It’s a far more complicated and lengthy process than just described, but that’s it in a nutshell. Patterson said CO2 is used because it’s so easy to remove—and remove completely—from the raw resin.

“It basically just evaporates,” he says. “If you’ve ever sent clothes out for dry cleaning, you’re already familiar with how effective CO2 is as a solvent, and how clean the final product is afterward. Unlike competing ethanol and hydrocarbon-based extraction technologies – which, in some cases, are at least partly responsible for the current problem with black market vaping products – cannabis extracts produced with CO2 are absolutely pure.”

Vitalis has more than 42,000 sq. ft of production capacity, split across several facilities. Walk onto one of its production floors and you might mistake it for an oil and gas repair facility. The vessels, caps, stands and other hardware are all made of 304 stainless steel, some up to 8 in. thick (which Vitalis has cut with a waterjet) to handle the 5,000-psi pressures needed during extraction. Patterson labels it a “Miller shop” and says they use a mix of manual and semi-automated welders to join tubing 3 in. to 12 in. in diameter with other components.

Most of the machined parts are currently outsourced to area shops, and of course, there are valves, clamps, fasteners and electronics to buy, but all else is produced by Vitalis. Once the fabricated components are complete, they’re moved to a separate assembly area, the pumps, motors and controls are wired up, and the final product is tested before delivery. From a customer perspective, Vitalis is a one-stop shop, an attribute that Patterson says was sorely lacking during his previous experience with extraction equipment providers.

“Vitalis holds a contractors’ license with Technical Safety BC, an organization that oversees the installation of various systems for safety issues,” he says. “It also holds ASME U&R certificates and is Pressure Equipment Directive accredited, all of which are required for the fabrication of pressure equipment in most of the world. We put everything together here, certify it, install it at the customer’s facility and then train them on how to use it. And if there’s ever a problem or they need application advice, we’re here to help. We stand behind our products.”

Patterson notes that he and his partners were fortunate in their timing in a number of ways. Canada’s recent oil and gas slowdown has meant plenty of qualified workers were available to meet the company’s admittedly crazy growth. They were also fortunate with the increased acceptance of cannabis in the United States as well as Canada’s recent decision to legalize marijuana.

“From a supply chain perspective, companies have been quite pleased to work with us, in large part because we use many of the same fittings, tubing and other components found in the oil and gas market,” Patterson says. “The same goes for the workers, who are eager to join an industry that’s thriving. Whatever you think of it, cannabis is booming. Our biggest challenge right now is to continue riding the board we’re standing on, and keep the wave from washing over us.”

As for the recent bad press over vaping, it’s in some ways working in Vitalis’ favor.  Patterson has fielded several questions recently from potential customers concerned over extract safety and wondering whether there’s a need for adjuncts to make the product usable in vape pens or other consumption methods.

“The answer is no because when you make a 100-percent pure cannabis product, it’s 100-percent safe to use,” he says. “Moreover, their concern speaks to a broader and somewhat unique aspect of the industry overall: the respect that suppliers have for their customers. 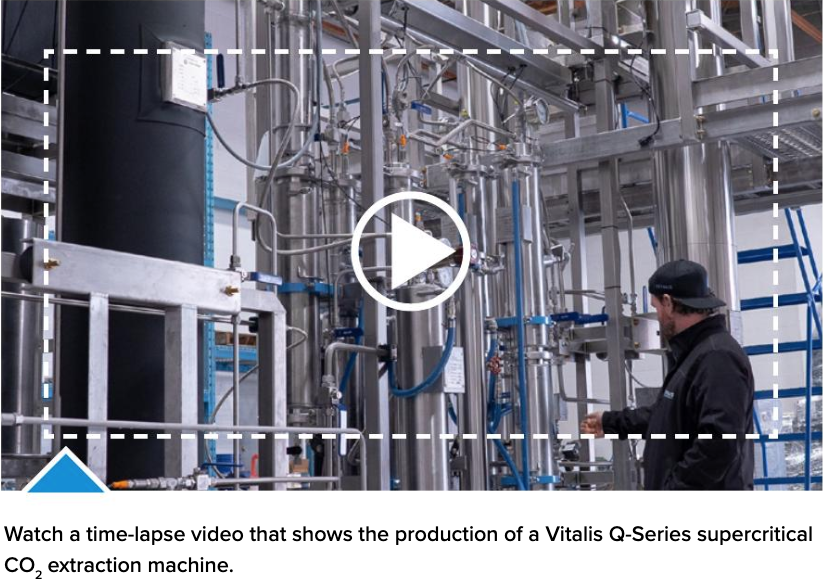 “True, there are some bad actors out there that try to make a quick buck by dumping a bunch of garbage into their cannabis products, but they’re in the minority,” he adds. “Hopefully, they’ll fade away as the number of reputable producers increases and as marijuana becomes more widely accepted. From the beginning of the company, our goal has been to offer equipment that produces completely pure cannabis extracts and does so in a reliable, cost-effective manner. That’s precisely what we’ve accomplished.”