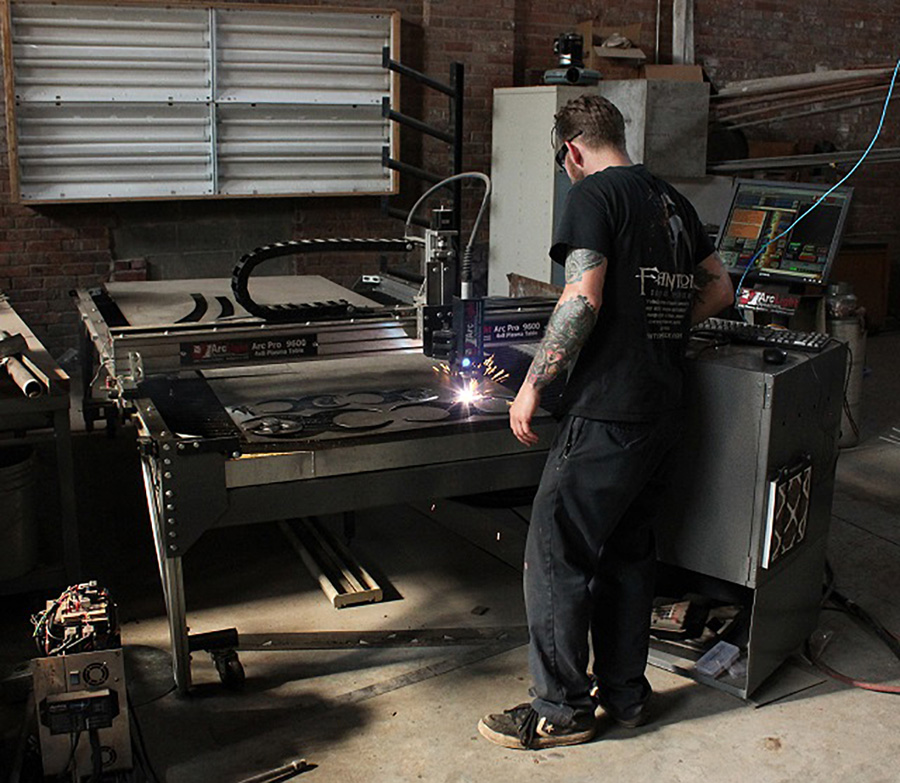 There are things to learn about laser welding from the experiences that this Tier 1 automotive supplier went through several years ago.

Automotive applications have been driving laser welding for several years, in the U.S. and elsewhere. With several new entries to the machine market shown at FABTECH this past November, it looks like the process is about to reach well beyond the automotive supply chain. But the automotive suppliers did much of the pioneering work.

And so we’ve extracted the fundamental points that were explained to us by a pioneering user, and boiled it down to some points of comparison that should be helpful to any potential new user of laser welding. This interview was conducted with Jeremy Dutzy, then senior assembly engineer at Ogihara (now Thai Summit America, Howell, MI, a Tier 1 and 2 automotive supplier).

Thai Summit America adopted laser welding as a way to increase quality while reducing costs for assembled parts. They’ve been a supplier to the major automotive OEMs for sheet-metal stamping for over 20 years. At the company’s facility in Howell, Mich., they provide customers with world-class engineering, stamping and assembly capabilities along with tool and die design and construction, modification and refurbishment.

They also have produced parts for appliances, alternative energy products and medical equipment, as well as automobiles using simultaneous engineering, total program management and just-in-time delivery methods to provide their customers with quality in an efficient, cost-effective manufacturing environment. 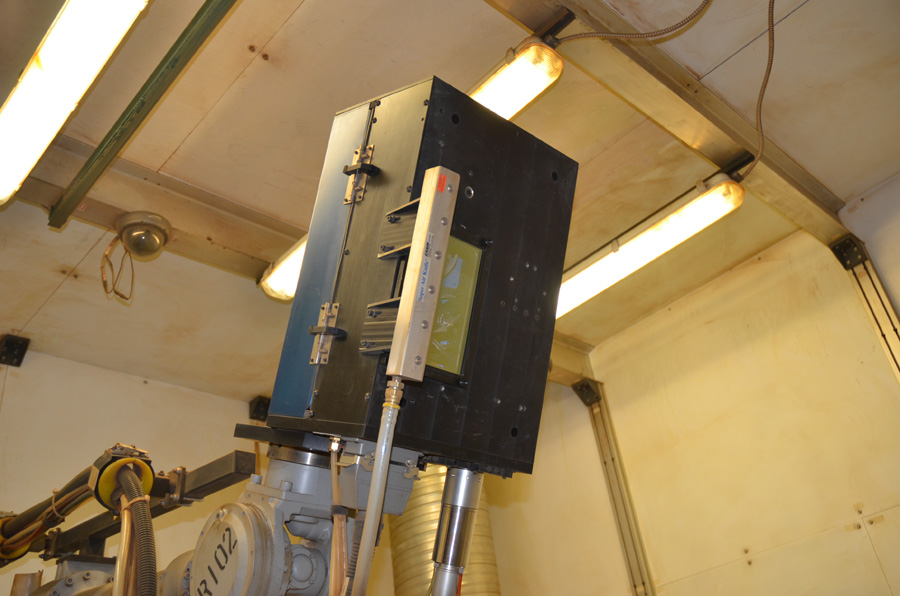 A fiber laser is used to stitch weld this part together. It uses much less flange area than spot welding.

To produce stamped automotive sheet-metal parts that are welded together, companies that do this work have three options: They can MIG weld a part, use spot welds or laser weld them together, says Dutzy. The choice usually comes down to part-cycle times, cost, how many parts are needed, when the parts are needed and overall assembled part quality.

“Equipment decisions become part of the quote process, as the automotive OEM notes that the parts need to be welded, but not how it’s done.” The OEM typically dictates how an assembly is welded together, however, a supplier is free to propose (for competitive advantage) an alternative method of welding if it offers the OEM a significant savings.

“The biggest comparison of these three processes is cycle time for part production,” mentions Dutzy. “With a laser, the cycle time is just so much faster. For instance, on a truck door assembly we produced 19 laser welds in 16 seconds, which also includes the robot moving. We laser weld 20-mm-straight line stitches compared to 6-mm-round spot welds.

“Now if you compare this to a spot welding manufacturing cell, on average, this process would take approximately 58 seconds to do the same number of welds, almost tripling the cycle time. Then, to meet the customer’s cycle time using spot welding, we would need multiple fixture stations to place the stamped components together.”

With the laser, the company’s operators load the parts that need assembling into one fixture. Instead of having multiple fixtures to do spot welding, laser welding only requires one, which saves fixturing costs.

To spot weld parts, Dutzy says the company would need two cells to meet cycle times. Or require multiple geometry stations where some of the parts would be spot welded, and then picked up and placed in another welding station for more work. “The number of fixtures required to produce an assembly can be reduced by about 33 percent on average,” he explained. “We have done studies on this. We’ve looked at the differences between spot and laser welding and found significant differences. That’s why we’re using lasers.”

But along with cycle times there is also the issue of floor space that’s needed for the welding system, remarks Dutzy. With a laser welder the company doesn’t need as many welding stations, meaning that overall floor space is smaller.

“We charge our customers floor space for our jobs. All this equipment is amortized over part costs, and we also have overhead costs for the use of our floor space for the cell. So the smaller the cell is, the cheaper it is for our customer, which drives the overall part cost down,” he notes. 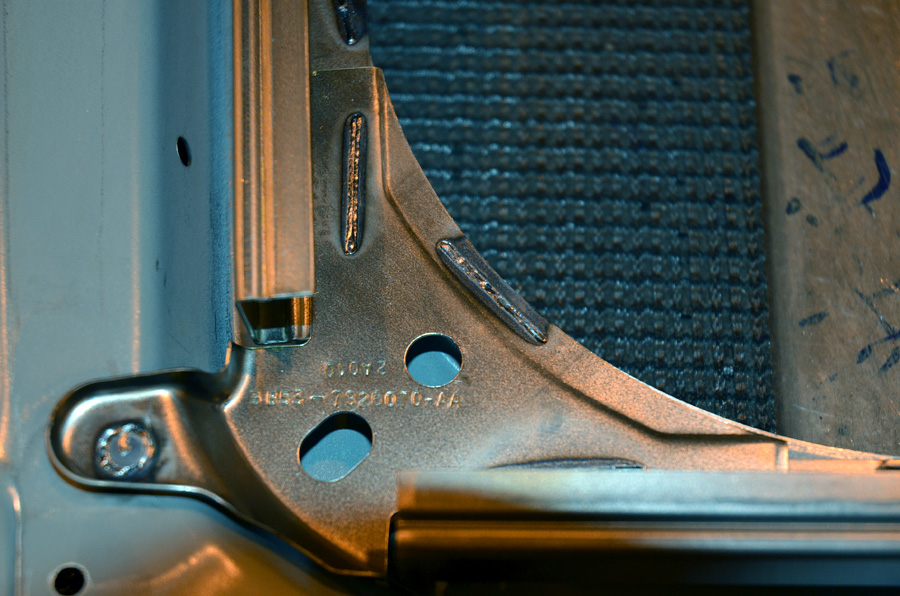 A fiber laser’s beam is focused through a collimator to get the proper beam size for welding. Here is the collimator mounted to the robot.

Laser welding is the key

Although Ogihara has used various methods of welding to assemble stamped parts, they tend towards spot and laser welding. These methods give them a better final overall part that enables Ogihara to remain competitive in reaching its customer’s specifications for quality in cost.

Originally for laser welding, the company had two self-contained manufacturing cells that were constructed by an outside integration company. Each cell has a robot and a 4kW YAG-fiber laser. The laser beam is fed through a fiber to a collimator attached to the robot. The collimator focuses the beam for welding and is supplied by the company integrating the system.

Each cell is specific for a particular part, notes Dutzy. Because of problems with the robots in the company’s first two laser cells, they needed to find another integrator for their next laser-welded part program. Therefore, Dutzy contacted Utica Enterprises, Utica, Mich., to quote an integrated laser system.

“During our quoting process and our supplier evaluations, we ended up using Utica Enterprises, and this company recommended using an IPG diode-pumped-fiber 4kW laser,” says Dutzy.

“At this point I really didn’t want to switch laser manufacturers, but there were cost benefits using the IPG laser. We would probably save close to 35 percent over using the other manufacturer’s laser for the initial cost,” he says.

“We also found that the floor space needed with the IPG laser was much smaller. It only needs about one third the area compared to our other lasers. Once we discovered this, we talked to Mike Klos, general manager, at IPG Laser’s Novi, Mich., location so we could get more information on it. We also found that Utica Enterprises had never worked with the laser manufacturer that we were currently using. Utica Enterprises has its own laser-head collimator that they have never integrated with the other manufacturer’s fiber laser.”

Dutzy also found that there were cost impacts with their other laser that they didn’t have with the IPG laser. For instance, their other laser has life-cycle timers built into the proprietary software that they couldn’t alter. If they receive an error code that says, “A filter has 20,000 hours on it and needs to be changed,” the laser would shut down completely and not allow the operator to override it unless the filter was replaced.

“So beyond the initial purchase cost issue, we didn’t have these service parts in-house for our lasers. We had to order them, and while we waited for them, the system was down and we were scrambling to get it back up and running. This was just starting to happen at the time that we were making the decision on the IPG laser,” says Dutzy.

What helped their decision with the IPG laser was that Utica Enterprises made arrangements to have a tryout between both laser systems at its facility. After the tryout, they found that the results for using its current laser manufacturer weren’t as positive. There were also some problems with the laser’s connection to the Utica Enterprises’ collimator.

“Therefore, under the circumstances, we decided to go with the IPG laser,” says Dutzy.

At the time of this interview, the company had six stamped part processing cells using five lasers. Three are IPG lasers, all of which are 4kW.

“Today our specification for welding cells is using an IPG laser. These lasers have done very well for us. Plus, the customer service we receive when we do have an issue is very responsive. IPG’s warranty is outstanding. It really helps us to avoid needing spare parts on hand to service these lasers,” remarks Dutzy.

Another important issue of laser welding is weight savings for a vehicle and overall production costs, as the weight of a vehicle will affect its fuel economy. Dutzy says that a laser needs a much smaller flange overlap for welding compared to a spot welder.

Other advantages for laser welding include:

A stonger part: A laser weld is 40 percent stronger than a spot weld and allows for decreased material thickness.

Single-sided weld access: A laser offers the ability to weld difficult part sections that can’t be accessed with a weld gun.

Elimination of sealers and/or adhesives: In some cases (depending on OEM requirements) a full seam laser weld can eliminate the need to apply sealer between parts. In these cases, material cost savings will be realized.

“Typically we are looking at a 20-mm-wide flange to spot weld, because of the electrode size. But by using a laser you only need a 5-mm flange area. Now add up the amount of material around the door’s perimeter and it helps to reduce the vehicle’s weight. Then if you look at the volume of parts produced for a line of vehicles, the material savings costs become significant.

“Also, although our typical laser weld is a 20-mm stitch, we do have some 6-mm circles and 20-mm staples that we use on mating surfaces where we aren’t able to weld a 20-mm stitch. With a laser weld, you can literally make any shape you want. You could even write words on parts if you wanted to,” he concludes.

Since that interview, the hardware side is pre-packaged and easier to come by. The benefits are still essentially the same, as are the tradeoffs.