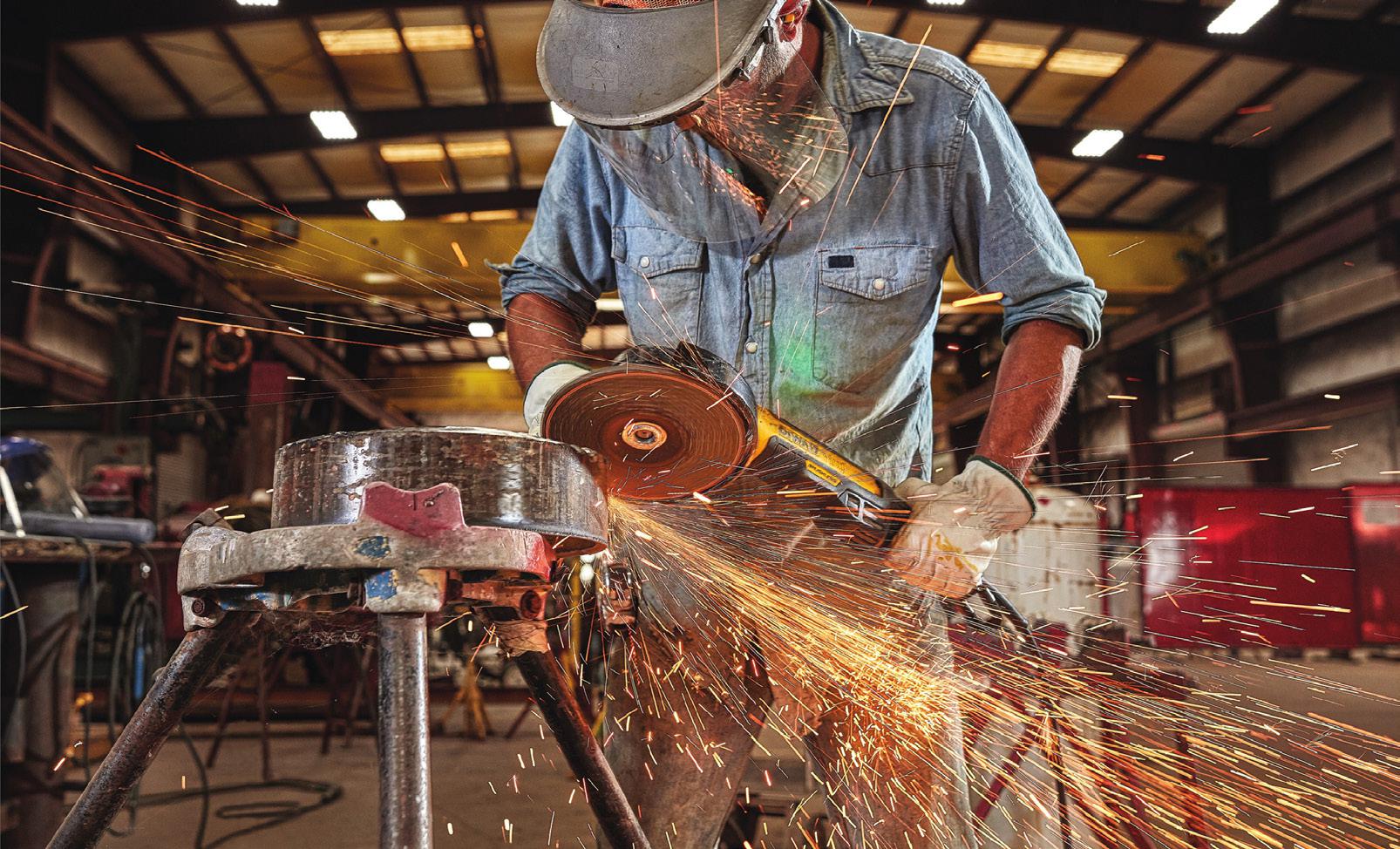 Comprehensive weld prep and laying down a proper bead are important for many reasons, but primarily because they can reduce the amount of secondary work required to finish a job. But, even the best beads require some level of post-processing. Fortunately, flap disc technology has improved throughout the years, giving welders more options in addressing their abrasive needs.

Using the best abrasive tool for the job hasn’t always been the highest priority for welders and metal fabricators, explains Stuart Sellers, sales and marketing manager for abrasives at Dewalt, adding that for a long time, companies focused on cost instead of value.

“As grain technology advanced,” Sellers says, “people started realizing the better value is in these better grains – higher productivity and lower overall cost. Up front, there is a higher price per piece, but on the back end, it ends up being a total overall savings.”

The grains on a flap disc are the workhorse, and as Sellers says, “everything else is just along for the ride – it’s there to support the grains and keep them on the disc.” The “everything else” in this scenario includes the backing that provides support for the flaps, which is where the grains reside.

Most backing materials fall into a fiberglass designation, which includes layers of fiberglass held together with resin. Backing is built with varying degrees of rigidity and strength, some offering more flexibility than others for different applications.

A new ceramic line of flap discs from Dewalt came out late last year that includes the company’s CTR (ceramic trimmable). This disc utilizes a fiberglass-filled nylon backing so it can be trimmed to allow access to usable material that would otherwise be wasted.

“The fiberglass-filled nylon falls in the plastic family,” Sellers says, “even though it’s not typically what would be called ‘plastic.’ It’s reinforced with the fiberglass strands to give it that support.”

Sellers says the CTR is a great tool for the operator who “wants to keep using the flap disc on the edge,” which means they’re working close to the weld, removing imperfections and weld spatter while leaving the weld untouched.

“You can use it like any other flap disc,” Sellers says, “but where it shines is in the fact that if you wear that edge off, you can just trim the backing, expose more flap material and run it again.”

Dewalt takes a different approach with another line of ceramic flap discs also introduced late last year. The DWA8280HRT (HRT for short), which Sellers refers to as a “jumbo” disc, is built with extra material for tackling jobs that require a lot of material removal. The HRT utilizes a standard fiberglass backing with phenolic resin.

“The more mass there is on the flap disc, the more layers you have to have,” Sellers explains. “The HRT flap disc has so much material on it, a plastic backing can’t support it.”
An operator working on plasma cut material with a large amount of stubborn slag needs a product that can handle the abuse. Seller says the HRT model is built specifically for that.

“The operator who would use the HRT,” Sellers says, “is the one that wants the best-performing flap disc you can get for high material removal. And, it has so much material on it, you can get so much more life out of it.”

“It’s typical for us to get that kind of feedback,” Sellers says.

“As we learn more about ceramic material, we can do more and more with it.”
Stuart Sellers, sales and marketing manager, abrasives, Dewalt

The grain (or grit) on today’s flap discs, rated as good, better and best, would go in this order: Aluminum oxide falls into the “good” category as it’s a good general purpose grain used in many products. Zirconia, a “better” material, is a step up from aluminum oxide. It lasts longer than aluminum oxide on tougher jobs. The “best,” however, is ceramic for efficient material removal.

Ceramic flap discs have been on the market for more than two decades, but the technology for producing those early discs made them impractical, cost-wise.

Starrett recently produced a video, putting the spotlight on its new line of hole saws.

Sellers says that over the past five to 10 years, developing the discs has become more economical, bringing the price down, finally making them an affordable option. Dewalt has produced ceramic flap discs for around seven years.

“As we learn more about ceramic material,” Sellers says, “we can do more and more with it. We’ve produced abrasive discs with different versions of ceramic grain over time, too; it’s become refined, so it’s not only economical, it performs better.”