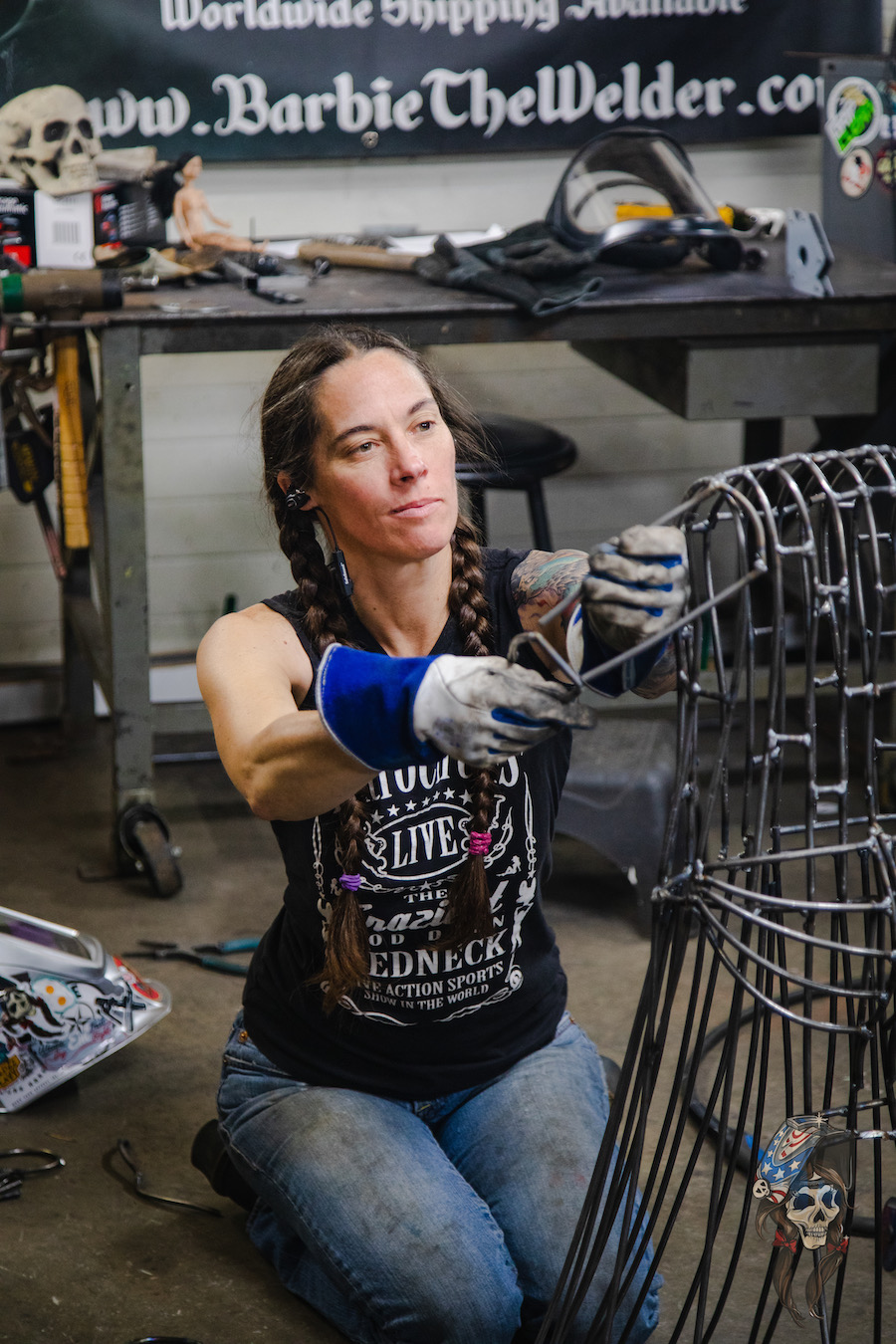 Over the past few years, the welding industry’s been changing. The demographics for what was traditionally considered a man’s job are expanding. If you take a look around, you’ll find plenty of women on job sites and in job shops alongside people of all sizes, shapes, ethnicities and age. And, they’re representing all sorts of industries in all parts of the country. It has truly become a vast and diverse community.

Recently, however, the American Welding Society (AWS) realized that welding artists were under-represented in this ever-expanding community, so the 100-year-old organization decided to do something about it and recruited Barbie Parsons, known as Barbie the Welder to her fans, and Stephanie Hoffman, the program manager of workforce development for the AWS Foundation, and founder, UnderGround Metal Works.

With a mission to bring welding artists into the AWS fold and to also inspire the next generation of welders no matter their gender or ethnicity, the two women quickly got to work on the first Arc 2 Art project – a 6-ft.-tall aluminum, copper and carbon steel sculpture of the Statue of Liberty replete with a welding helmet and D1.2 structural aluminum code book.

AWS’s first foray into its Arc 2 Art initiative is playing out online in a series of videos posted on the organization’s social media channels and on YouTube. Each video documents the two welding artists and the progress they’re making individually and as a team. Hoffman, for example, is responsible for the base of the statue as well as the welding helmet and D1.2 book while Barbie is working on Lady Liberty herself.

“This is the first time that AWS has ever embarked on anything like this,” Hoffman says. “When I first came on board at AWS, a big draw for them was that I was such an advocate for the welding community. I love AWS, but they were really behind the times in terms of connecting with metal artists, a core group of the welding community. In the past, they haven’t gotten the recognition they deserve, but we’re aiming to change that with Arc 2 Art.”

Originally, the goal was to unveil the collaborative piece of art at Fabtech 2020 in Las Vegas, but Covid-19 had other plans. Barbie and Hoffman, however, weren’t deterred from pushing forward and plan to share the completed work online. Besides, they’ve been facing roadblocks their entire careers and have never let a little hiccup slow them down. This time around won’t be any different.

When Hoffman first became interested in welding, she was immediately faced with the hurdles that come with being a female in a man’s world – and she was still in her teens. Welding was offered as an elective at her high school, but up until then, the school had never had a girl enroll in the program.

“They said they didn’t have the means to have a girl in the classroom because I had to change my clothes and they didn’t have a designated bathroom nearby,” Hoffman says. “My mom wouldn’t take no for an answer, though, so she went to bat for me. If it wasn’t for her, I wouldn’t have been able to get into the program, and really, I might not have gotten into welding at all.”

Hoffman was the first girl to graduate the high school’s welding program, and she did it while earning three AWS certifications along the way. Despite her early achievements, there would be more challenges ahead.

“As a 95-lb. female, I wasn’t what people expected when I walked onto a job site,” she recalls. “Typically, I assumed that I was brought on as an equal opportunity hire, but no matter what, I always performed better than they expected. And despite all of the inappropriate behavior by my male coworkers – I was called every derogatory name in the book – my skills were improving by the day.”

Very early on, Hoffman made a name for herself for her anodized aluminum TIG welds, causing passersby to stop and watch her work. In short order, she was surpassing some of the most senior welders on the job sites in both speed and quality, inciting jealousy in her coworkers, but instilling major confidence in herself.

Around that same time, Hoffman gave birth to a baby girl, hurtling her into the all-too-familiar female position of having to juggle the responsibilities of being a mother while still pursuing a serious career. Knowing she loved welding too much to give it up, she sought out a teaching gig, hoping the hours would give her more time to spend with her little girl.

Although she was heralded for her teaching skills, the money wasn’t as good as what she’d been making on traditional job sites, forcing her to work nights and weekends until something better came along. And that it did.

“AWS offered me a job to be the face of their organization, which was such a blessing,” she says. “I was able to continue teaching, but on a much bigger scale. When I’m not on the AWS trailer touring the country, I’m at home with my daughter, making YouTube content and getting kids interested in welding. It gives me the ability to bridge the struggle of being a mom while still doing what I love.”

In addition to the important work that Hoffman is doing at AWS, she also owns her own business, UnderGround Metal Works, which has gained a significant social media following. With more than 11,000 followers on Instagram, she has cultivated a broad audience that tunes in to see her unmatched aluminum welding skills.

Woman on a mission

Even though the design of the Lady Liberty sculpture was based off of a sticker that Hoffman had designed and illustrated, she considers Barbie the artistic brains behind the project.

“I’m not a sculptor; I’m a fabricator first and a metal artist of sorts second,” she says. “I wouldn’t consider myself as an artist in the same respect as Barbie.”

The two women, however, still have a lot in common. Like Hoffman, Barbie dealt with her fair share of sexual harassment early in her career. Those frustrations ultimately propelled her to seek out a path where she would be the one making the calls.

“I got a job as an auto mechanic right out of high school, but I knew I wanted to be a metal sculptor,” Barbie says. “I knew the first step was learning how to weld, but I didn’t know what to do after that. I had zero plans. I was living in the projects at the time, so there was no garage space or anywhere to practice; I just knew I needed to learn how to weld.”

Barbie’s parents had pushed her to go to college – not because they disapproved of her desires to be an artist, but because they’d lived a blue-collar life and wanted something better – more financially secure – for their kids. Reluctantly, she enrolled at a local college to become a paralegal, but quickly knew she couldn’t live a life trapped behind a desk all day. So, she signed up for a six-month adult learner welding course where she “learned to weld enough to get myself in trouble, but enough to pass the class.”

After completing the welding course, Barbie landed a job where she was respected and valued – a nice change of pace compared to her days as an auto mechanic. As her confidence grew and after she bought a house that had a garage with enough space for an artist’s workshop, she bravely quit her job to finally seek out the future she’d envisioned for herself.

“I worked at that same fab shop for five years and loved it right out of the gate,” she says. “Back then, I was watching shows like ‘Orange County Choppers,’ ‘West Coast Choppers’ and ‘Monster Garage,’ and the fab shop made me feel like I was walking on the set of those shows every day when I showed up at work. Eventually, I earned my journeyman in iron plate and sheet metal but then left in September of 2014 to go full-time as an artist.”

Barbie’s first sculpture was a three-tier chandelier, which took her 40 hours to create. Posting photos of it on social media for all the world to see was a nerve-wracking endeavor, but the responses she got validated her decision to become a metal artist. Since then, she’s realized the career she envisioned and then some. She’s written five books, developed a huge social media following and has produced sculptures for a variety of clients, including Harley Davidson.

When Barbie is done with Lady Liberty’s hands, arms, head and hair, she’ll drive her up to New Jersey where she will be placed on the copper base that Hoffman painstakingly constructed and where she’ll get her D1.2 code book and welding helmet.

“On top of that, we’re going to create an American flag that’s going to drape over the front of her,” Barbie says. “We still have no freaking clue how we’re going to get the metal to drape and look like fabric, but if anyone can do it, it’s the two of us. It’s pretty cool how what I’m doing enhances [Hoffman’s] work, and what she’s doing enhances my work. There’s this really beautiful synergy between the two of us, and that’s exciting.”

And that’s what makes them such an effective team to launch AWS’s Arc 2 Art initiative. Because, truly, there couldn’t be a more perfect pair to inspire all of the new young women in the industry and all of the artists that might be too scared to go all in on their dreams.

“Overall, it just comes down to finding happiness in what you do,” Barbie says. “The skilled trades are deeply honorable professions. You have to be smart to be a plumber or an electrician. And it’s the same thing with construction, auto mechanics and welding. You need to be deeply intelligent to work in these professions, and without them, our country stops. I’m not saying we’re more needed than the white-collar workers out there, but for me, it just feels so good to be able to work with your hands and create something or fix or build something. And yes, you’re tired. And yes, you’re dirty. But there’s such deep joy and fulfillment in that.”