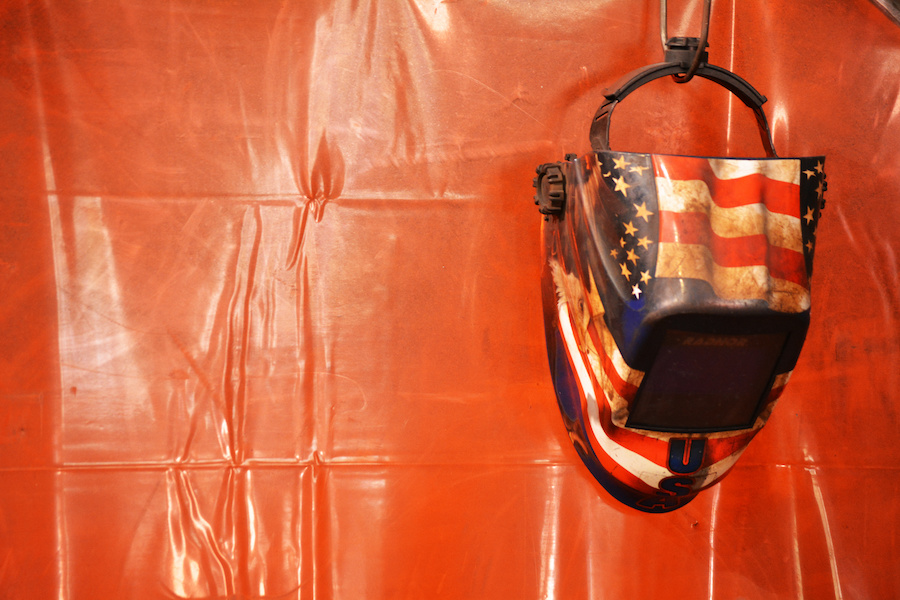 The American Recovery and Reinvestment Act of 2009, known more commonly as the Recovery Act, was an $831 billion stimulus package aimed at saving jobs and helping to establish new jobs as soon as possible. This was the 111th Congress’s response to the Great Recession, and it worked: A survey of economists revealed in 2014 that it did lower unemployment. Furthermore, and perhaps more importantly for American manufacturers, the “Buy American” provision in the Recovery Act required that public projects using stimulus money use iron, steel and other manufactured goods produced in the United States.

The “Buy American” provision isn’t new. In fact, in the waning days of Hebert Hoover’s presidency, the Buy American Act of 1933 was signed. It had similar requirements regarding the federal government to buy American-made steel, iron and manufactured goods whenever possible. The intent was to protect domestic businesses and labor because many people at that time were frustrated that so many products purchased to build government properties were from England.

Since 1933, there have been additional policies built around the “Buy American” concept. For example, in the Surface Transportation Assistance Act of 1982, a “Buy American” provision, was included for projects carried out by the Department of Transportation. These included rail, highway, transit and bridge construction projects. The definition of American-made was that at least 50 percent of the product had to originate in the United States.

The Acts and provisions within sound great in theory, but do they actually work in favor of manufacturers that take pride in their American-made ideology? According to a 2018 report from the Government Accountability Office, “Buy American” works. Less than 5 percent of products covered by the Act were foreign end products. Obviously, there is an incentive for American-based companies to tout the fact that they produce their products here in the good ‘ol USA. Not only does it let large contractors know that they have viable candidates to buy products from, but it’s also a marketing incentive.

According to a survey by Consumer Reports, eight in 10 American consumers say they would rather purchase American-made products than ones that are imported. Again, that’s a strong incentive to market the fact that goods are American-made. And that’s why so many marketers are quick to jump on “Made in America” campaigns – they work. The pride that a manufacturer takes in being a domestic producer is also felt with consumers who follow through on a personal ethos when they plunk down their money on an American-made product; they’re seeing that American-made label as a reflection of who they are and, thereby, more easily develop a loyalty to the brand. 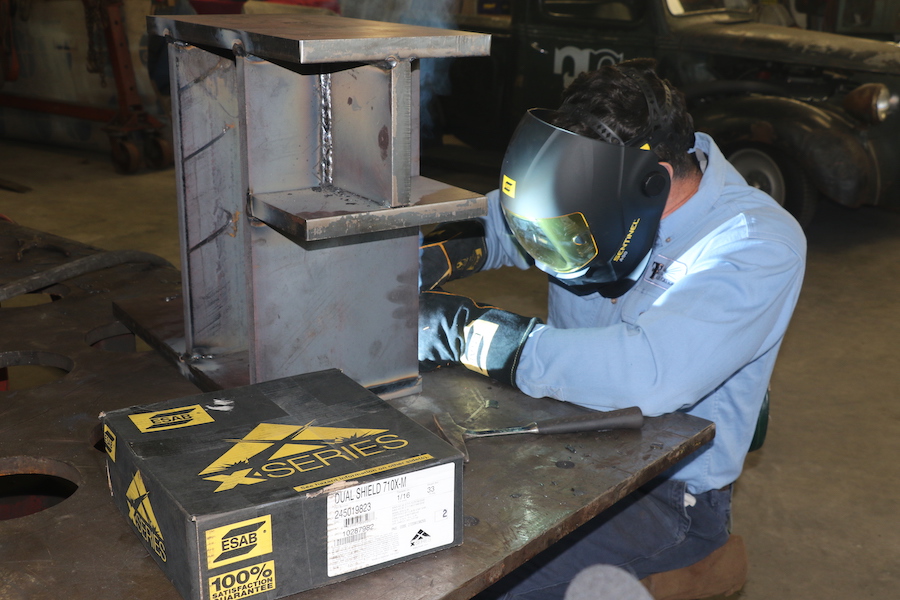 American-made products have long been perceived to have higher quality than their foreign-made counterparts, but when it comes to filler metals, Brent Boling, president at Arc-Tech Welding Inc., can prove it. When given the opportunity, he’s more than happy to demonstrate the differences for anyone that may be dubious.

“A local welding supply company in my area provided me with some foreign-made GMAW wire, so I felt compelled to set up a test for them to show them the differences in performance,” Boling explains. “We set up two of my machines with wire – one running their wire and the other running my preferred wire, which was made in the United States. Both machines were set to the same settings and same gas mixes, but they delivered remarkably different results. Just to be sure, we switched the wires on the machines to document that the results were in no way tied to the machines. And as one would assume, the foreign wire was vastly inferior to the domestic wire for everything from spatter and bead shape to production rates.”

Boling has been welding as a career since 1975 and has been certified in GMAW, GTAW, SMAW, FCAW and SAW since 1978. As a seasoned veteran in the field of welding, he’s seen the full gamut of welding wires on the market. He’s also served on various committees and subcommittees at the American Welding Society (AWS).

“As a lifelong fabricator and welder, I’ve probably used the full spectrum of steels and welding consumables, including those that were documented as coming from various countries,” he says. “Over the years, I’ve found that it’s easy to tell the difference between steels from the United States and steels from other countries. No matter the compliance to ASTM standards during manufacturing, they perform noticeably different. This also holds true of the materials used to produce welding electrodes for various processes.”

As an AWS Certified Welding Inspector, Boling looks for a variety of factors in the materials and filler metals that fabricators use. He looks at tensile strength, yields, CVN, compliance to applicable codes, and whether a wire or electrode functions properly within the manufacturer’s specifications.

“The D1.1 structural welding code for steel has a lot of prequalified systems, so it’s frustrating to get electrodes that don’t perform within the parameters stated on the data sheets,” he says. “Overall, performance is highly suspect from some foreign suppliers, but generally not from domestic producers. Regardless, performance is something that needs to be confirmed for fabricators that have to adhere to codes. Understandably, it can be quite frustrating when things don’t go as stated in the data sheets.”

In terms of the “Buy American” provision that requires public projects to use iron, steel and other manufactured goods produced in the United States, there is more to it than just stimulating the American manufacturing industry. When American-made filler metals are used, it is oftentimes much easier for a fabricator to comply with government-mandated codes and standards.

“In my AWS committee work, I talk regularly with manufacturer reps, and over the years, I’ve learned what some of them go through to document that their products meet D1.1, D1.8, D1.5 and other codes for ASME, API and military production,” Boling says. “I see a lot more testing and documentation from domestic producers than I do from foreign producers. Some of the foreign interests can’t even be bothered to make certificates of compliance easy to access. On top of that, it’s difficult to document that a foreign-made filler metal has been tested for D1.1, D1.5, etc.”

Every part of the manufacturing process for electrodes is critical, as is the documentation of the use of those electrodes. As a member of the B1 committee on Methods of Inspection, Boling and his fellow committee members cover all of the bases in terms of AWS codes and the information found within the organization’s Welding Inspection Handbook in order to guide fabricators in the electrode compliance documentation required for their QC and QA activities.

“There are plenty of electrodes that just don’t cut it, and so many of us that are active on the AWS Welding Forum tell fabricators to just stay away from them,” Boling explains. “They are far more trouble than they’re worth. When you combine the time for cleanup and correcting any other negative features, they really aren’t cheaper. In fact, they are more expensive than using higher quality products produced domestically.

“Domestic manufactured products have been superior since at least the 1970s,” he concludes, “and in my not-so-humble opinion, that is still true today. Bottom line: Electrode producers need to heed user input about the characteristics that affect production when developing consumables – and that goes beyond just meeting AWS specs. The entire manufacturing process, including the use of certain raw materials, is incredibly critical in terms of the quality of the end product.”

Long before the American Recovery and Reinvestment Act was enacted in 2009, ESAB Welding & Cutting Products prioritized the stateside production of the company’s filler metals. Bob Gulas, business product manager in ESAB’s cored wire division says those early decisions were determined by the company’s customer and segment base and that its cored wired products are made and melted here in the United States. In fact, the company was so well positioned that when the Act was made official, there were no ramp-up efforts required to meet demand.

According to the company’s website, “Whether you’re building a bridge or making roads safer, your job is to keep America moving. And ESAB, the worldwide leader in welding and cutting, is here to keep your projects moving with Buy America-compliant welding filler metals. We not only offer the finest crafted filler metals around, we have the widest assortment of anyone, anywhere, hands down. From Atom Arc to Dual Shield to Spoolarc – and much more – we’re sure to have just what you need to get your job done.”

“Even as a global company, we understand that the local markets have their own demands,” he explains, “so our U.S.-made products are designed for welding how the American welders like.”

And, of course, all of the company’s electrodes and cored wire products made at its Hanover, Pa., facility are developed and tested to meet AWS standards. Although electrode manufacturing volume varies according to infrastructure and military investments in the United States, year over year, the company’s production capabilities have grown.

“ESAB’s average annual production of cored wire at our Hanover facility adds up to 720 million ft. or 140,000 miles,” Gulas says. “That’s enough American-made wire to go around the equator 5.6 times.”