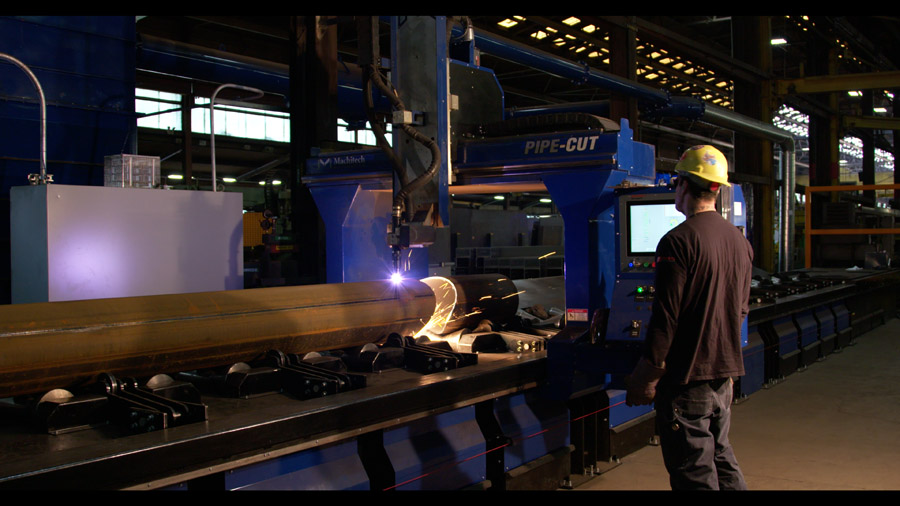 It’s the famous line from Field of Dreams, the 1989 Kevin Costner movie that is often misquoted as “if you build it, they will come.” The line may as well be the slogan for Oregon’s Fought & Co. Since 1948, the company has built some of the largest structures in the country from airports, stadiums, hospitals, schools and malls to its primary focus – bridges.

Recently, however, Fought & Co. landed a new opportunity from the University of Oregon to build a world-class track and field center – a literal Field of Dreams. To carry out the project, the company invested in new technology and a new line of equipment.

“This arena is a one-of-a-kind project with components that aren’t typically part of a regular steel project,” says Wayne Searle, the company’s CEO. “There are big plate columns that we have to manufacture in pieces. It also has pipes that sit on the backside, forming a diagrid system (a framework of diagonally intersecting metal).”

With its curved piping structures, the stadium is designed to have a unique architectural look. Right out of the gate, Searle knew he would need new equipment if he had any hope of submitting a competitive bid. And that’s where Machitech Automation entered into the picture.

“The new X-Definition plasma technology on the XPR300 provides finer cut quality than other systems on the market,” says Sean Lawlor, a Machitech product specialist. “Edge and hole quality are closer to laser cutting than ever before and at a much more affordable price point.”

In an incredibly competitive market, those capabilities are highly desirable to Fought & Co. Heavy workloads and a challenging pricing environment force the company to continuously look for ways to perform faster and more effectively than its competition. The new plasma cutting system has provided the company with an edge and some much-needed flexibility for pipecutting.

“We can do the types of projects that we couldn’t do before,” Searle says. “Because of the speed and accuracy, we’re able to get work that normally we wouldn’t be able to get, so we have a higher market share. One of the things that I like most about the plasma cutter is once the pipe has been cut, it’s done. There’s no extra cleanup and no more grinding; we just knock a little slag off and go right to work. We save lots of time and money.”

Since investing in the new plasma cutting equipment, productivity is up an estimated 90 percent. And because no cleanup is required after cutting bevels and holes, it equates to even higher productivity levels. This would be significant in any industry, but especially in steel construction where it’s not uncommon to have to do things repeatedly.

“The cut quality of the holes and bevels in the pipe is actually very good compared to cutting them by hand,” says Carlos Paladini, Fought & Co.’s system operator. “The machine actually cuts them at the exact angle at which we need to have them, and they are very accurate and very precise. Before getting the PipeCut machine and XPR plasma cutter, we cut the pipe by hand using a saw or beveled it with a grinder. Not only did the process take us much longer, it wasn’t as accurate.”

At Fought & Co., the team regularly cuts what Searle calls a fish mouth and other shapes into the pipe. There is little room for error.

“Before, if a part wasn’t cut properly, we would cut, grind and hack things apart to try to get it so that it was done right,” he says. “Now, we cut it one time to create that fish mouth shape and we are done. We can go right to work.”

In addition to cutting shapes in pipe, the company also uses the PipeCut machine and the XPR plasma cutting system to cut wide flange shapes (I-beams), tubes, round pipes, angles and other items. Searle says that before the arrival of the XPR system, the company struggled to stay competitive on jobs that had plate and tube and pipe. Now, Fought & Co. finds itself taking on more projects it couldn’t take on before because of the new systems.

“Before we had the plasma pipe cutter, we would have to lay things out with a template,” Searle explains. “It was very tedious and cumbersome. We’d have to kind of mark a line and then cut it, most likely with an oxyacetylene torch. So, what would take eight to 16 hours we can do now in less than one hour. In some cases, we do it in less than 1 min.”

Thanks to the ProNest and Rotary Tube Pro software used with the system, there is a noticeable speed advantage. Fred Butkovich, a programmer at Fought & Co. calls the software very user-friendly.

Both Butkovich and Searle note the company no longer needs to outsource.

“Before we had our new equipment, when we did a project with the fish mouth cutting we  had to subcontract out because we didn’t have the capability to do it,” Searle says. “But today, we don’t need to outsource. In fact, if somebody else has pipe to cut, we may be able to bring it in and do the job for them. We can also do slotting – putting holes in the pipe – where before, that pretty much had to be laid out manually. Now, we can do it all on the machine.”

So thanks to its new, cutting-edge technology and equipment, Fought & Co. can continue to build fields of dreams. And the company can do it more efficiently and economically to produce real results.