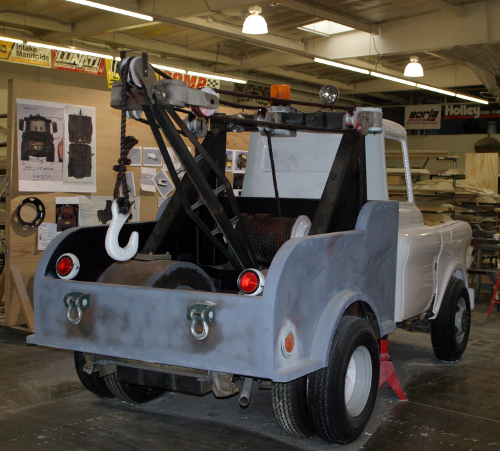 Unless you live in a cave and don’t venture out much, you know who Tow Mater is. He’s the loveable tow truck that was in the blockbuster-animated-film “CARS” (voiced by comedian Larry The Cable Guy).

Jay Leno suggested to Pixar/Disney that a full-size set of cars be built to promote the film in the car show circuit. He also suggested that my company build them. We ended up producing Tow Mater, Lightning McQueen and Sally the Porsche.

Once I reviewed the animated drawing of Tow Mater, I had a good idea of what I needed to build the truck. I hit the road looking for a donor truck that I found on my first trip out.

The requirements were real loose. It only needed dual-rear wheels, built in the 1970s, run and have an automatic transmission. Nothing else was important, and I didn’t care about the color, the condition of the body or the interior. The one I found was a big block 1971 Chevy. The transformation of the long-bed Chevy to a perfectly scaled, full-size version of Tow Mater required the wheelbase to be shortened and narrowed.

As we scaled the animation that Pixar sent us up to a full-size truck, we started the build by stripping the truck down to the bare frame. To verify the needed length and width, I used the wheels for the vehicle’s scale. I quickly noticed that to maintain the cartoon scale, the truck would have to be shortened 5 ft. and the rear end needed to be narrowed by 2 ft.

This was a daunting task for the two week build schedule we had to work with. But once we got started, all of the pieces seemed to fall into place. After all, this wasn’t our first cartoon build. We had just finished Lightning and Sally the day before this job was approved by Pixar.

Once we removed the rear end and shortened the axle housing, the rest of the work seemed pretty straight forward. We pulled out the axles and cut a one-foot section out of them. We then welded the shortened axels back together and reinstalled them in the newly shortened axle housing that was cut apart and welded back together. While we were at it, we removed a few of the rear spring leaves for a softer spring action. The narrowed rear axle would now allow the inner tires to clear the leaf springs by an ant’s whisker, but it cleared!

To shorten the frame I built a twin dolly system with two tracks made from inverted angle iron. The tracks had three tabs welded in place. These were used to bolt it to the floor. Our spacing had to be exact to align with the dolly’s wheels. Now the two dollies could be located on the tracks and placed under the front and rear truck frame before shortening it. Extension tubes were welded from the top of the dollies to the bottom of the truck’s frame rails.

After the frame rails were cut and a five-foot frame section removed, the remaining front and rear frame ends mounted to the dollies could be easily rolled together for a perfect alignment. We then shortened the drive shaft and the truck was again running and drivable. This took us a day.

I then decided to use both metal strips and ¼-in. ABS-sheet plastic for Tow Mater’s body using a system that I personally invented for film vehicle construction. I used it on the cars I built for the film “Taxi.”

We’ve made a lot of cars out of ABS sheet plastic and if the plastic is thick enough, it will hold up quite well to even highway use – and it’s much easier to form if you have the right equipment.

Building Tow Mater as a full-size truck to match the animated version had never been done. However, I felt I could change the animation specifications to CNC computer data, download this information into my specially designed CNC router and build wood plug sections from it. Once a plug was routed out to form a body section, we took it to my 4-ft. by 8-ft. vacuum forming table, heated the plastic and placed it over the plug. We then sucked out all the air between the plastic and the plug making a perfect body-section form.

This plastic part could then be trimmed out and applied to Mater using 6061-T6 aluminum backup strips that were attached to the truck’s frame and were bent to form the body. The plastic panels were mounted to these strips using a set of countersunk rivets on each side of the seam and epoxy to glue the pieces together. Seams were then filled with body putty and sanded down flat.

Mater’s truck bed was built mostly out of sheet metal with some plastic parts, and the whole truck was aged with paint. A few precision dents were added with a torch and hammer in just the right places, and the paint was touched up to look as if the body was scraped or hit.

The entire process to build Mater took two weeks with a crew of six that I trained to do this type of work. It also consumed 20 sheets of ABS plastic, six sheets of steel and about six gallons of paint.

Tow Mater, Lightning McQueen and Sally were used for the “CARS” film promotion around the world, after which they were retired to the Pixar main office under the ownership of John Lasseter, who directed “CARS” and is an avid car enthusiast and collector.

To find out more about Mater, you can check out Disney’s podcast on how these three life-size vehicles were built by Customs by Eddie Paul. It’s a free download on the Apple iTunes site, or go to www.epindustries.com or www.deadlineTV.net for a direct link.