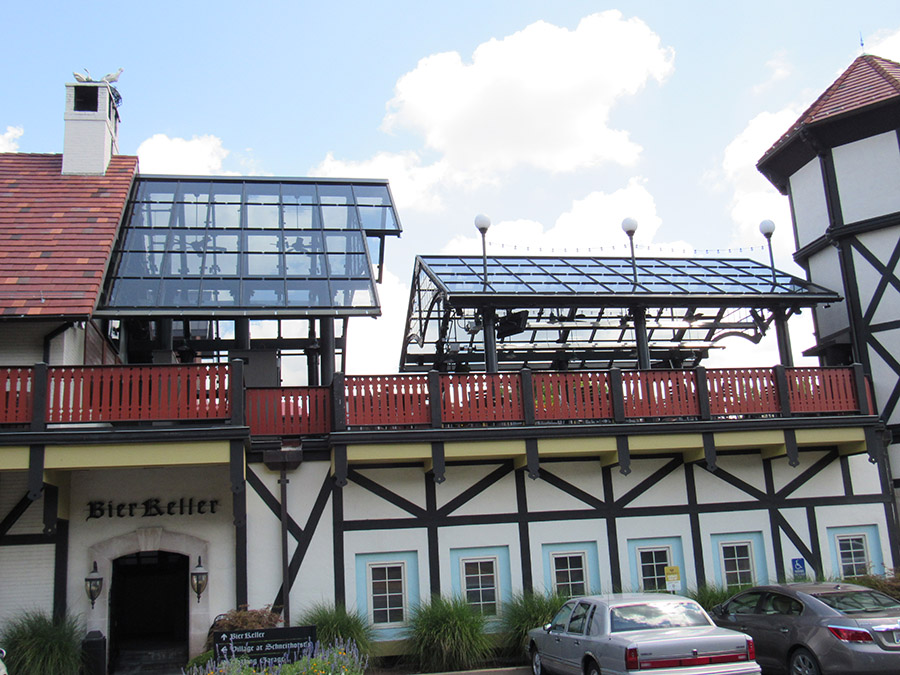 Schneithorst’s Restaurant & Bar has been a landmark in St. Louis for nearly a century. With outstanding Bavarian food, service and atmosphere, it has served generations as a place for business lunches and for families to enjoy dinner and entertainment.

It has been known as a “place to see and be seen.” In fact, Major League Baseball Hall-of-Famer Stan Musial, a 22-season veteran with the St. Louis Cardinals, was known to frequent Schneithorst’s where he’d have breakfast or lunch and sign autographs for fans.

For a business with such a positive, long-standing legacy, it was of no small concern when the owners, the fourth generation of Schneithorst’s to operate the restaurant, decided to update the exterior of the business. Appropriately, a local company, Troco Custom Fabricators, was selected to fabricate the stylistic rooftop structure, which was completed last summer.

Part of the reason for the renovation was that the heavy timber rooftop was deteriorating, so the decision was made to utilize a European-inspired train shed theme with stylized detailing to replace the worn out sections. Mainline Group Architecture Inc. designed a rooftop that consists of steel canopies and laminated glass panels and utilized Troco’s experience to bring the design to fruition.

The column capitals feature intricate metalwork, including hop and barley designs, which were cut using an Omax Maxiem 1530 waterjet machine. They also utilized equipment from Ellis Mfg., including Model 1800 and 4000 bandsaws.

“It was a privilege to work on such a unique project for a popular restaurant that has been serving the St. Louis community for nearly a century,” said Tim Trotter, president of Troco, in a news release covering the renovation project. “The new rooftop structure is built to offer customers the experience of a European-inspired beer garden and will stand the test of Midwestern weather for decades to come.” 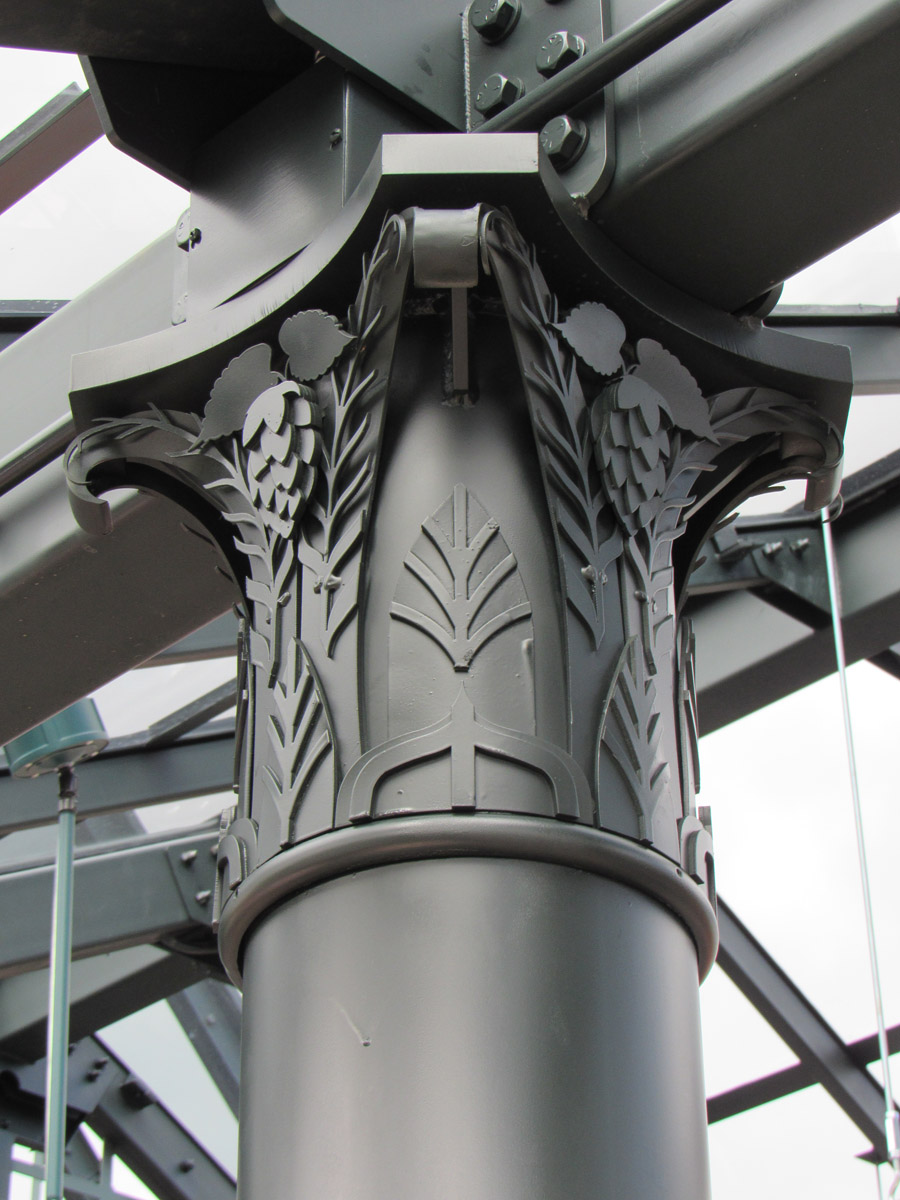 For ease of installation, Troco workers decided to mechanically fasten all the pieces together. That allowed the precision needed in lining up elements of the structures while it was being fabricated.

All the pipe and tubing was cut in Troco’s shop using Ellis horizontal bandsaws. The flat stock and decorative items were cut on the Maxiem 1530 waterjet.

“We like having a waterjet as opposed to plasma or laser because it’s more diverse,” Trotter says. “It can cut practically any material – metal, stone, concrete, glass and wood.” 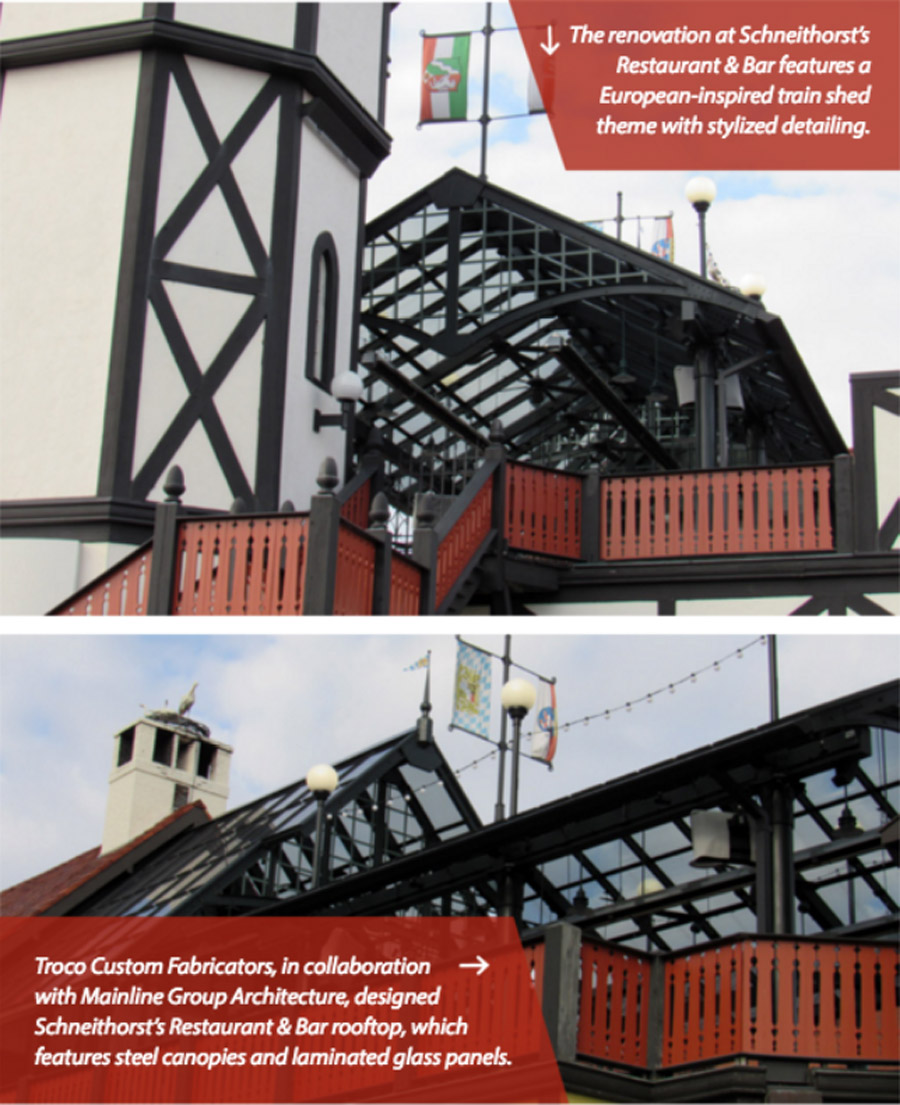 “We utilize the 1800 often because it provides precision cutting for our large-scale construction components,” Trotter adds. “It’s a reliable, large saw that fit appropriately to scale for the rooftop structure we fabricated.”

The Model 4000 handled some of the larger metal pieces for the Troco crew, too. It features a built-in protractor for fast and accurate selection of angles, but the stock remains in the same position for all cuts. The bandsaw head moves left or right for angle cutting. It, too, is constructed of heavy steel and uses a 15-ft. blade that is 1.25 in. wide.

“We like Ellis saws because they’re made in the United States and are very durable,” Trotter explains. “The 4000 is our go-to saw for large-scale metal fabrication, such as the pipe and beam details on the rooftop structure.” 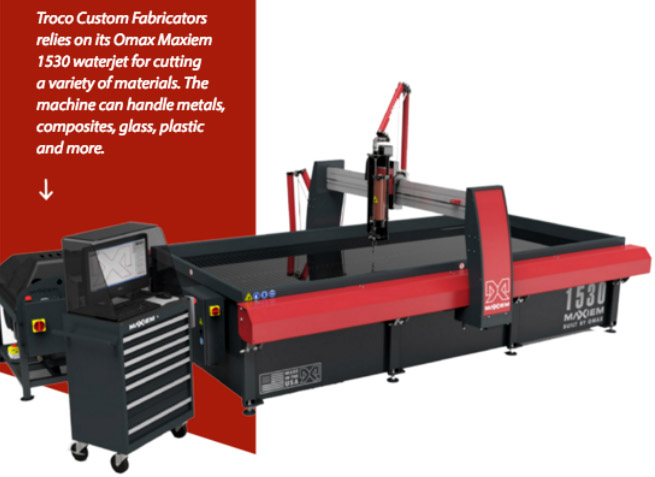 Given the different materials Troco worked with throughout the project, it made sense to utilize a piece of machinery that was able to cut the materials selected. The company’s Maxiem 1530 waterjet sets a high standard for precision cuts.

The Maxiem 1530 is touted as a machine that can “cut virtually any material quickly and efficiently, maximizing profitability.” It utilizes an advanced linear motion system that uses digital linear encoders for a fast, micron-level cutting head position. The feedback to the controller assures that every part is accurately cut. 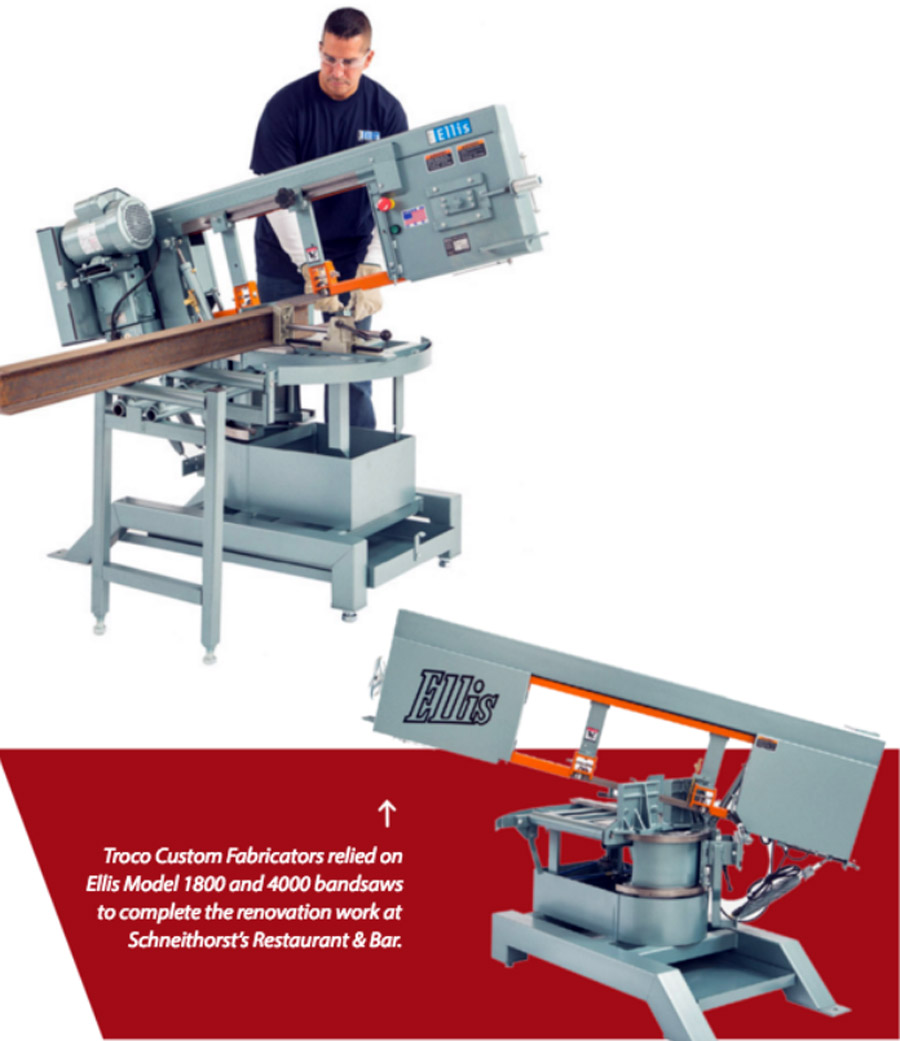 “The Omax machine allowed us to cut the aluminum plates to create the very intricate barley and hop details featured on the column capitals,” Trotter adds.

The Maxiem 1530 features the company’s Intelli-Max standard software that makes it easy to create or import part files and path them for cutting. The software uses a fourth-generation cutting algorithm and is one of the major reasons the machine delivers one of the fastest cutting speeds in the competitive abrasive waterjet industry.

Another benefit of the Maxiem 1530 is that it leaves behind a “satin-smooth edge,” which reduces any secondary work, such as smoothing or deburring. Furthermore, because it uses water and abrasives to cut, there were no heat-affected zones or mechanical stress on any of the materials that Troco used in fabricating the rooftop components.

Considering the reputation of Troco and Schneithorst’s, it comes as no surprise that such precision and care went into the restaurant’s restoration project. Typically, when individuals and families head to a restaurant, the food is the focus. For the diners at Schneithorst’s, however, the new metalwork might be just as appealing as the items on the menu.