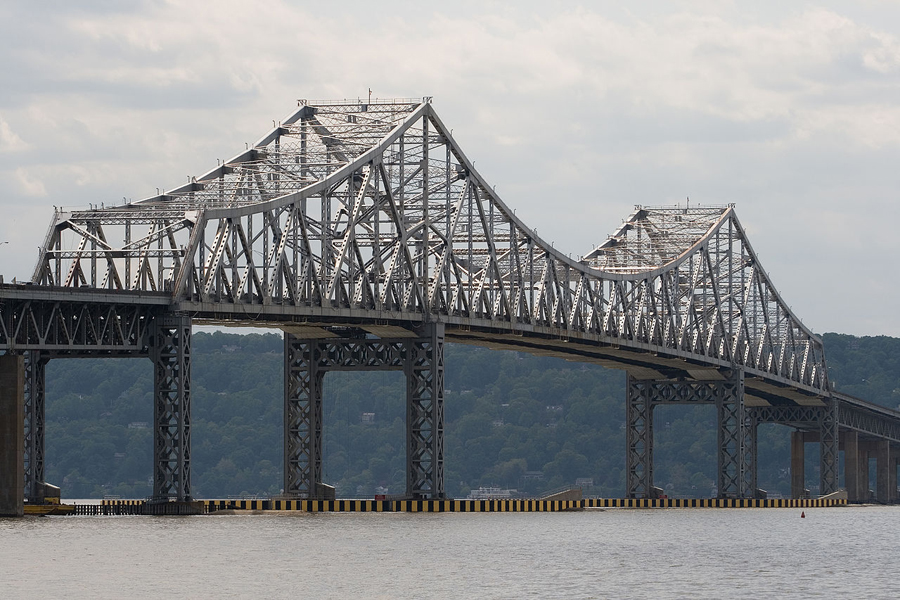 More than a half million bridges carry cars and trucks across the rivers of the United States every day. Of those bridges, the U.S. Department of Transportation estimates one in four is considered structurally deficient or functionally obsolete. Really, it’s not surprising given that the majority of U.S. bridges are 50 to 60 years old. Most were built in the 1950s and 60s after the signing of President Eisenhower’s Federal Highway Act.

It may be coincidence, but two of the largest bridge failures in the past decade occurred on bridges built during that time period. Minnesota’s I-35W bridge, which opened to traffic in 1967 after three years of construction, came down during the evening rush hour in 2007 sending dozens of vehicles into the Mississippi River. Even though the bridge on Interstate 35 was the second busiest span in all of Minnesota, and even though the bridge had been flagged as structurally deficient as early as 1990, construction of a new bridge was not scheduled to take place until 2020.

Nearly six years later, a portion of another bridge on another major artery, I-5 in Washington State, collapsed after an oversized truck carrying a load to Vancouver struck several overhead support beams. This span, crossing the Skagit River and built in 1955, had already been flagged as functionally obsolete because it lacked redundant load bearing beams. Put another way, engineers recognized the failure of just one critical part could cause the whole bridge to come down.

In spite of the cited examples, the Federal Highway Administration insists that U.S. bridges are safe. It says the structurally deficient or functionally obsolete designations simply mean a bridge has a structural defect requiring the addition of a load or traffic limit, or in the case of a functionally obsolete bridge like the Skagit River Bridge, is carrying more and heavier traffic than originally intended.

Whether federal and state experts consider the bridges unsafe or not, there is agreement that the bridges are, at the very least, vulnerable. The good news is that states are working to fix or replace many of these more vulnerable bridges. A $4 billion replacement of New York’s Tappan Zee Bridge is currently the largest bridge project underway in the United States, but it’s certainly not the only one. Projects are underway in all 50 states with the most urgent work taking place in northern states by crews trying to beat the arrival of winter.

Before construction crews can do anything though, they need steel. In any given year, Casco Bay Steel Structures Inc. will see more than 20,000 tons of steel pass through its doors. From two locations in Maine, more than 100 people work to cut and weld steel girders together. And these girders aren’t exactly small.

Oversized trucks, forklifts and heavy cranes lumber across a 30-acre yard. Delivering steel, unloading steel, moving steel; starting in the early morning hours and going late into the night. This steel will make its way into one of Casco Bay Steel’s two long fabrication facilities and eventually to projects throughout New England, New Jersey and New York.

Like the rivers they cross, every bridge and the girders that support them, is different. Some are straight, some are curved, and some are tapered, all with variable depths and lengths. The longest span to leave Casco Bay Steel? 172 ft., more than half the length of a soccer field. The heaviest? 89 tons.

As no company wants to fabricate a defective girder that could find its way onto a bridge used by thousands of cars and trucks a day, Casco Bay Steel’s fabrication process is highly disciplined. From the sourcing of the raw steel to the final smoothing of the beam, the work is carefully done with several inspection points along the way.

Though Casco Bay Steel is less than 20 years old, its president, Bryon Tait, is well-versed when it comes to the fabrication of structural steel. He started in the business when he was 19 years old, more than three decades ago. In that time, Tait has seen a lot of changes in the way girders are constructed. Today, the process is faster and more automated.

“The technology today has actually helped us produce more product with fewer hours and keeps us competitive,” Tait says. “There are fewer of us today than 30 years ago, yet we’re producing more.”

One of the most notable changes for Tait was the move from oxyfuel to plasma cutting. Casco Bay Steel added plasma cutting capabilities about seven years ago. Tait says the improvements in cut speed alone made a huge difference.

“The quality of cutting that we have to use for our process is actually minus zero plus a sixteenth,” Tait explains. “We have to have nice square cuts with no gouges and Hypertherm gives us that.”

In total, Casco Bay Steel uses two Hypertherm systems, a HyPerformance HPR260XD and HPR400XD. Both systems were designed for x-y, bevel and robotic cutting operations and feature fast cutting speeds, rapid process cycling, quick changeovers and high reliability when handling mild steel, aluminum and stainless steel. The thickness of steel cut with the systems can vary though the most commonly cut thicknesses are in the 1/2 to 1 in. range.

“We were impressed with the cut quality from Hypertherm,” Tait says. “Once we saw the difference, we wanted to make sure all of our future systems were Hypertherm.”

Among the girders Casco Bay Steel fabricated with its Hypertherm systems are a series of steel girders used on a bridge in Hypertherm’s own backyard. Not even four miles from a major Hypertherm facility, the New Hampshire Department of Transportation is replacing a bridge in service since 1927. The bridge has served admirably, but nonetheless, nearly 90 years of traffic has taken a toll. The concrete pillars that hold the bridge up over the Mascoma River are crumbling. The girders and rods are rusted and exposed.

When the bridge was built nearly 90 years ago, the automotive scene looked quite different. An estimated 20 million cars were on the road, an average of one car for every two U.S. families. Today, the numbers are reversed. Each U.S. family owns at least two cars. In all, more than 250 million cars and trucks traverse U.S. roads. An estimated 17,000 of those travel U.S. Route 4 over the Mascoma River every day – a number expected to nearly double by 2030. 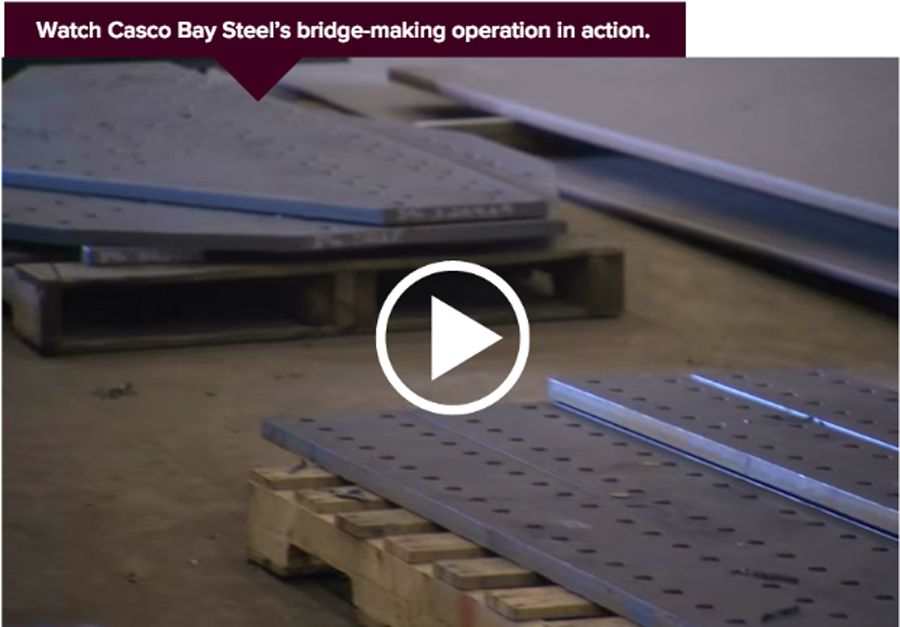 “There’s so much more to building a bridge today than 50 years ago,” says Peter Kehoe, a civil engineer with the NHDOT. “For example, there are environmental concerns, especially since the Mascoma River serves as a drinking water source for the City of Lebanon, and there are also traffic control issues. This route carries 17,000 cars a day, and we need to make accommodations for that with detours, flagging, etc.”

To improve safety and sight distance, the new Mascoma River Bridge is quite a bit wider than the original 1927 span. Five variable-depth plate girders, ranging from 86 to 125 ft. in length and weighing a combined 430 tons, are spliced with a friction-type connection to cover the 440-ft. long span. The bridge is engineered to last 80 years, but Kehoe believes the solid construction will keep it operational well into the next century.

It took Casco Bay Steel about six weeks to complete the fabrication process and a construction team three weeks to erect and install the girders at the bridge site.

“We are seeing more plasma cutting technology being used on bridges now,” Kehoe says. “Not just the bridge girders, but also the cranes and end dams to the bridge expansion joints.”

The first cars and trucks began crossing the new Mascoma River Bridge this month, but the crew’s work isn’t done yet. Instead, they are moving next door to begin demolition of the old bridge. After that, it’s on to the next project, which, for better or worse, there is no shortage of as the NHDOT works to replace another bridge on its list.