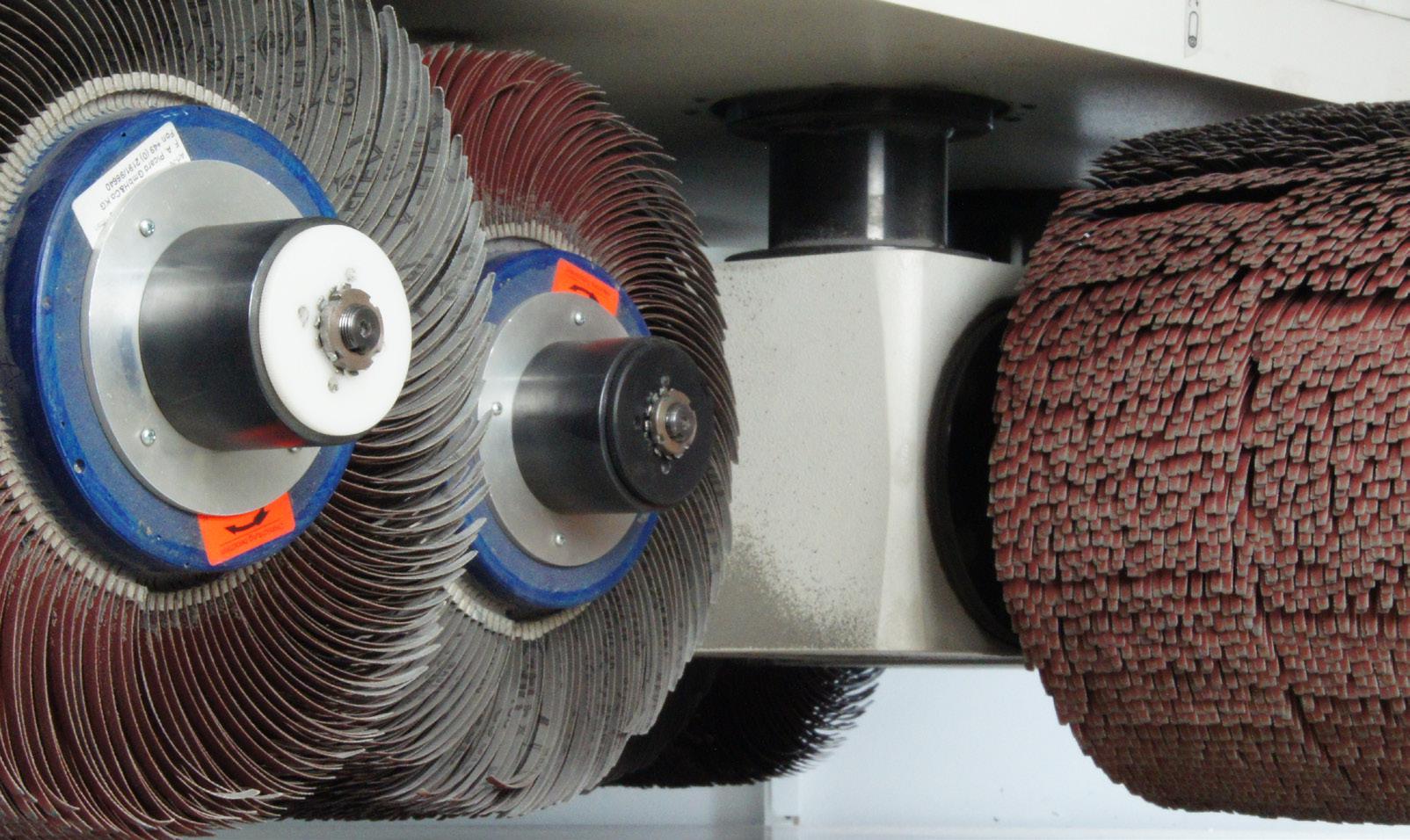 Ouch. Burrs and sharp edges on sheet metal parts are dangerous, slicing fingers and snagging clothes. Whether it’s a roller cabinet for an operating room or the frame for a refrigerator door, metal edges must be smooth and rounded to prevent injury to consumers.

In many production environments, this is done by hand, using dozens of methods, such as abrasive flap wheels or possibly a belt sander for heavy burrs. These manual methods are prone to inconsistencies and unpredictable edge quality, never mind the fact that they are plain old hard work.

Machine tool manufacturers have responded with a variety of deburring and metal finishing technologies, many of which are suitable for even low-volume applications. Timesavers LLC has long been one of the leaders in this area, offering belt and orbital sanders, slag grinders and straight-grain finishing machines as well as the dust collection systems needed to keep the metallic and abrasive debris produced during sanding operations under control.

Yet burr removal is only part of the picture when it comes to edge quality. Timesavers’ national sales manager Dewayne Kangas says belt sanders do a great job of knocking down the burrs produced during stamping, laser and flame-cutting operations and are also quite effective at producing the straight-line surfaces desired on many metal products.
However, they present a serious problem for some manufacturers: The edges belt sanders leave behind are razor sharp.

“When you send a piece of sheet metal through a belt sander, the leading edge – and to some extent those edges running parallel to the belt rotation – will be quite sharp,” Kangas says. “No one likes sharp edges, but this is especially true in industries such as medical and food processing where people are routinely handling parts with their bare or lightly gloved hands.”

It’s for this reason that Timesavers began offering Scotch-Brite (non-woven) barrel brushes a number of years ago for use on its machines.

Kangas says these abrasive wheels work better than sanding belts at reducing sharp edges, but the results still leave room for improvement. Through collaboration with its sister company in Holland, Timesavers soon found a better way.

As it turned out, the barrel-shaped wheel was a good starting point, but Timesavers engineers modified the design to hold thousands of abrasive flaps rather than one solid mass of abrasive. By mounting a few pairs of these brushes (counter-rotating) to a carousel, then rotating this carousel assembly over a moving conveyor belt, parts can be fed beneath the brushes and hit with abrasive from all sides.

It sounds (and looks) aggressive, but Kangas says the effect is gentle enough for even plated or film-coated parts. It provides a smooth, consistent edge break all-around. Varying levels of edge rounding can be achieved by adjusting brush interference, the feed speed, the abrasive grit or the speed of the brushes themselves.

“The rotary brush machine does a perfect deburring job, with no handling issues at all,” he says. “It can also be used to provide a nice, multidirectional finish, like random scratches.”

Dan Bickel agrees. As the operations manager at Nercon Engineering and Mfg. Inc., he purchased a rotary brush machine in 2012 and has been quite happy with his decision.
“I did a lot of research on deburring machines, and the Timesaver looked to be the most capable, lowest maintenance option available,” he says.

Watch this video for an overview on deburring.

“It turned out to be a great investment. It just runs and runs.”

Nercon is a family-owned manufacturer of conveying systems based in Neenah, Wis., with its manufacturing facility in Oconto, Wis. It has been making conveyor systems since 1976, and Bickel says pretty much any product you see in a grocery store probably rode on a Nercon conveyor at some point.

Nercon has a long history of building custom conveyors, but is now targeting customers that can utilize its ProCore conveyor system, a pre-engineered solution designed for consumer packaged goods and similar applications. These customers, like so many other consumers of sheet metal goods, demand safe products, free of sharp edges that can catch or cut.

Many of the parts used to build these systems are made of stainless steel and are irregularly shaped, containing internal slots, holes and edge profiles that are difficult to deburr manually.

Since installing the rotary brush machine, however, the deburring department has gone from four people to just one, and now produces “consistent edge quality, every single time.”

For those worried about the cost of buying new sets of abrasive drums every few months, don’t be. The abrasives used on Timesavers rotary brush machines are admittedly “not cheap,” but they do last a surprisingly long time.

“We bought the Timesaver in October 2012 and didn’t have to replace the wheels until early 2014,” says Bickel. “That’s fantastic consumable life when you consider that the machine has been kept busy for one shift and sometimes two since the day we got it.”

The wheels are also easy to change out. Bickel says Timesavers provided simple instructions, allowing him and his team to finish the task in a few hours on a Saturday morning.
“They did a great job getting us set up and supporting us over the years,” he says. “I’m very grateful to them for delivering a product that makes my life a whole lot easier.”

Humanetics Precision Metalworks Ltd. is another happy owner of a rotary brush machine. The company was started by the Hasty family more than 40 years ago and now has 400 employees, three facilities in Texas and one in Wuxi, China, and produces a range of machined and fabricated products.

Learn how to create an edge radius that can eliminate sharp edges.

From satellite communications and defense contractors to banking, oil and gas, telecom and airport automation, Humanetics manufactures and assembles most anything that comes its way, giving credence to its motto that “the possibilities are infinite.” Chief operating officer Jack Wehrle says the decision to purchase a rotary brush machine was an easy one.
“We were constantly facing challenges with some of our customers on the consistency of our deburring,” Wehrle says. “One example is the Postal Service, which imposes very strict standards on edge quality. So too does the medical community and anyone else concerned with product safety.”

Wehrle says these factors were key considerations in the rotary brush purchase, but the rationale went deeper than that. At times he would see components with unexpectedly higher production costs; upon further investigation, these were often traceable to the deburring department, where the tedious, sometimes unpredictable amount of work needed for manual edge deburring would drive down profit margins.

Another hit to the bottom line came from poor quality. Rework due to an unacceptable deburring job was bad enough, but parts would occasionally end up in the scrap bin after an overzealous edge break.

“Manual deburring is very challenging,” he says. “You’re not only dealing with the human element, with multiple shifts and varying skill levels, but you also have all the different abrasive media and deburring methods to contend with.”

For instance, belt sanders act differently with an old belt compared to a new one, requiring more pressure as the belt wears. Operators become fatigued and might be more aggressive at the start of the shift than at the end. And it’s easy to become distracted and start talking to your neighbor. This not only creates the potential
for problems with edge quality, but also the possibility of workers cutting themselves because they’re not paying attention.

“They’d come to depend on the machine and didn’t want to go back. It makes everyone’s job much easier.”
Jack Wehrle, chief operating officer, Humanetics Precision Metalworks Ltd.

These were the variables that Wehrle and his management team had been dealing with for years. But when he raised the idea of automating the process, it was met with some initial skepticism from those who felt it would be difficult to replicate a very manual process with a machine. But after careful consideration and a lot of tire kicking, Humanetics went ahead with the purchase of a rotary brush machine from Timesavers.

The skepticism didn’t stop there. The deburring department was restructured, eventually going from 20 employees to just five. And even though no one lost their jobs, there remained a fair amount of grumbling over the new machine.

“The shop people were pretty cynical at first,” Wehrle says. “No one thought it would work. But Timesavers came out, installed the machine and trained the people, and pretty soon everything was running smoothly.”

“They’d come to depend on the machine and didn’t want to go back,” he explains. “It’s made everyone’s job much easier. And from the management side of things, I reduced my labor costs substantially while bumping up our throughput a fair amount. You put part after part on the belt and they come out the other end with consistent edge breaks and this cool, omnidirectional surface finish. We’ve also cut way back on our consumables, spending maybe half what we did before; a set of brushes lasts about nine months, which I figure comes out to a couple bucks an hour. I stopped tracking my ROI after the first three months, the payback was that fast.”