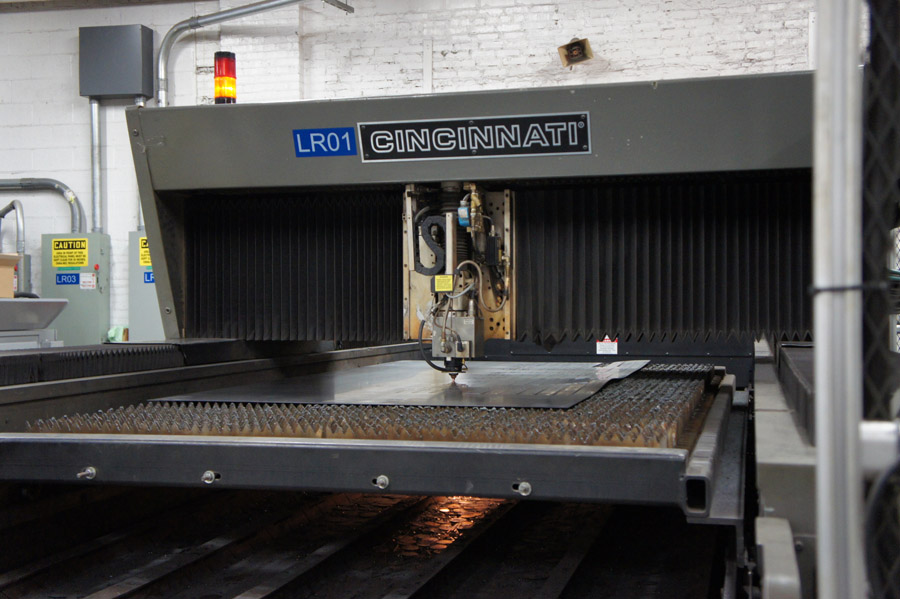 With more than 90 years of successful operation under its belt, it’s easy to say that Midland Metal Products is doing something right. Ask owner and facility director B.J. McDonald what the underlying driver is behind nearly a century of doing business, and he’ll tell you it has to do with the company’s traditional values. But in that same breath, he’ll also attribute the company’s long run to how it embraces technology.

“When we decided that we needed to get into laser technology, our expectations were high,” he says when describing the company’s two lasers from Cincinnati Inc., a CO2 707 for 5-ft.-by-10-ft. dual pallets and a CO2 840 also for 5-ft.-by-10-ft. dual pallets. “The lasers were acquired almost 10 years ago, and they’re still running beautifully. However, we are absolutely planning the purchase of fiber lasers from Cincinnati. Because of the increased speed of a fiber laser, these investments will almost double our current capabilities.”

“When we first considered buying a laser, I was faced with the challenge of improving the ROI,” McDonald recalls. “We’re debt adverse here. We pay cash for every machine tool and don’t borrow anything, so the ROI was really important.”

So in addition to justifying the purchase, he also had to promise an aggressive ROI. His family was counting on him. McDonald represents the fourth generation of the private family-owned business, which was founded by his great grandfather.

“There are four family members as owners,” he explains, “my mother in financial, my dad and brother in sales, and I run the facility and operations. The cool thing is that all four of us have different skill sets that complement each other’s, so we each occupy different parts of the company. We trust that the other person is doing what’s best – it’s a really harmonious working environment.”

Being responsible for the facility and the overall operations of the organization, McDonald had to answer the question of how a new laser machine could be paid back in two to three years.

“I had a hard time proving that a standalone machine could do it in short order, so it was quickly determined that the laser had to run 24 hours a day,” he explains. “So how are you going to that? You’d have to add people and management to shifts that you didn’t have before. It made more business sense to spend more for a material handling system that could shorten the payback of the laser.

“When we bought the material handling system, we only had one laser, but we designed it so it would be big enough to one day accommodate a second laser,” he continues. “People wondered why the system occupied such a large footprint, but it made sense when the second laser arrived. When all was said and done, the investment paid for itself in under three years.” 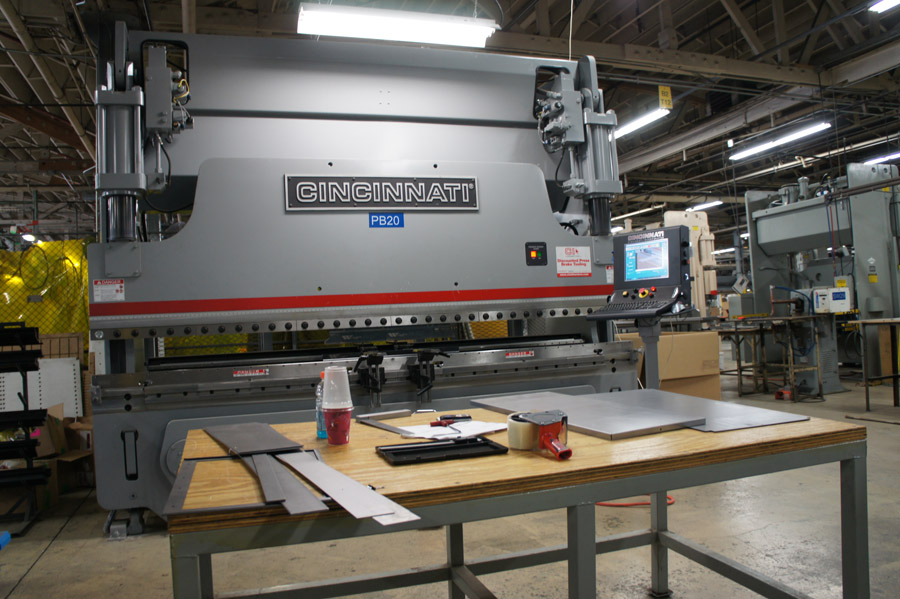 In addition to its two Cincinnati lasers, Midland Metal Products has a wide range of equipment, including 20 press brakes.

The company is fully capable in sheet metal, tube and wire, which gives Midland Metal Products a competitive edge in the marketplace. Thanks to its sophisticated collection of equipment, the company can handle all of the main types of material – even wood. The company also provides assembly for its customers as well as powder coating, making it a full-service custom job shop.

“The ad agencies tend to revolve around the Chicago and New York markets,” McDonald says about the company’s customers. “Working with those firms means that we’re also doing business indirectly for all sorts of bigger companies, like Budweiser, Coca-Cola, Walmart and Dollar General. We also have big customers in Atlanta and on the West Coast, so we go far beyond the Chicago area.”

Based on tonnage, McDonald says that 90 to 95 percent of the material it processes is commercial-quality cold-rolled steel or mild steel. The other 5 to 10 percent is a mix of brushed aluminum for signage as well as stainless steel.

In terms of making the most of its laser technology, Midland Metal Products currently uses shop air for cutting – an incredibly cost-effective way to run a laser machine. The company uses it exclusively for up to 12-gauge material.

How to handle automation

The large automation system McDonald referred to is Cincinnati’s Modular Material Handling System, or the MMHS, coupled with a material storage tower. As the predecessor to the current Cincinnati version, the MMHS-100, the MMHS is a flexible and expandable system. It can handle sheet from 20 gauge up to 1/2 in. thick for sheets that measure 5 ft. by 10 ft. and 6 ft. by 12 ft.

As McDonald mentioned, the goal for bringing in the system was to improve the ROI of the new laser as well as increase overall shop capacity. According to Cincinnati, automation does that and more. Automation, such as the type at Midland Metal Products, can also reduce operating costs and increase safety. Cincinnati has various options available that can speed up the time for loading material, including an additional model that also sorts cut parts. 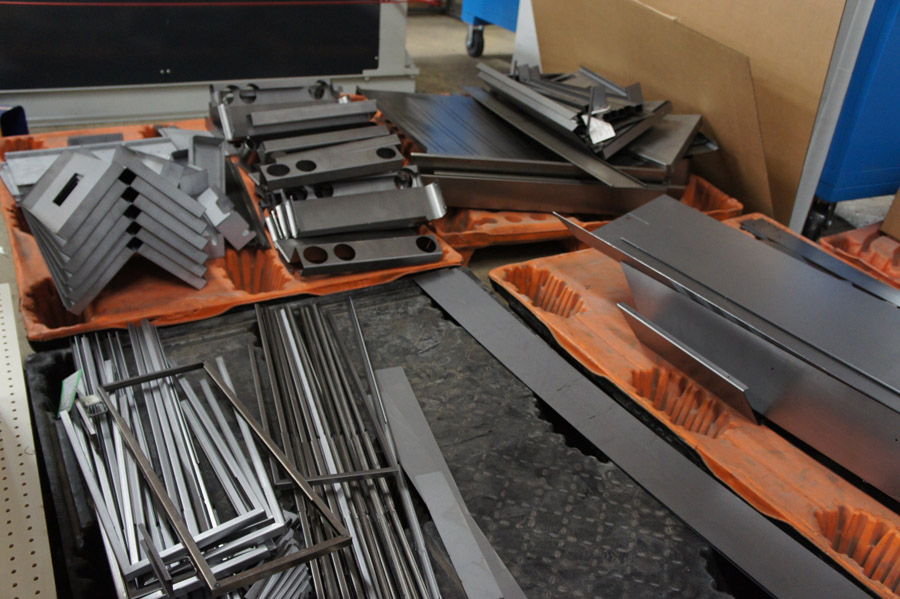 “The ideal customer for this model, the SortMMHS, is one that wants to reduce labor costs, improve throughput, and minimize handling of raw material and finished parts,” says Mike Otten, product specialist at Cincinnati. “The type of customer that may benefit most is one who processes a steady diet of the same parts and can benefit by optimizing the sequencing and speed of sorting. However, the system is flexible to allow small contract manufacturers to quickly program the system for small lot size runs.”

Otten notes that with the ability to simultaneously pick up multiple parts, the system improves productivity by removing and sorting parts faster than doing so manually. He says that productivity is further enhanced when the cycle time of a nest is relatively fast.

“In situations where more than one person is required to remove parts from the laser, the SortMMHS has the capacity to lift heavy parts,” he explains. “This eliminates situations where personnel are removed from their primary duty, further reducing the overall productivity and throughput. The system’s software has the logic to place parts on different, pre-determined pallets. This reduces and even eliminates human error in sorting parts that could otherwise affect productivity of the cell.”

With the material handling systems – no matter the variety – operator involvement is minimal. Otten says one requirement for operators is to populate the control of the material warehouse with information about material type, sheet size and quantity pertaining to each raw material drawer. However, the introduction of automation doesn’t mean that operators aren’t needed. Midland Metal Products new automated powder coating station is a good example of that.

“When we added automation to our powder coating capabilities, the guys in the spray booth were thinking – and this is human nature – there goes my job,” McDonald says. “And this is true with the lasers. We improved our ability to make flat parts, and that drove us to expand our press brake capabilities. So we needed more operators.”

McDonald is incredibly proud of the team at Midland Metal Products and stresses that everyone is a part of that team for a reason.

“Labor reduction from the automation wasn’t the goal with the material handling equipment,” he continues. “If people are single-dimensional about material handling – weighing equipment costs to labor costs – they’re going about it the wrong way. That’s not how you prove the investment. It’s all about increasing your machine on-time.” 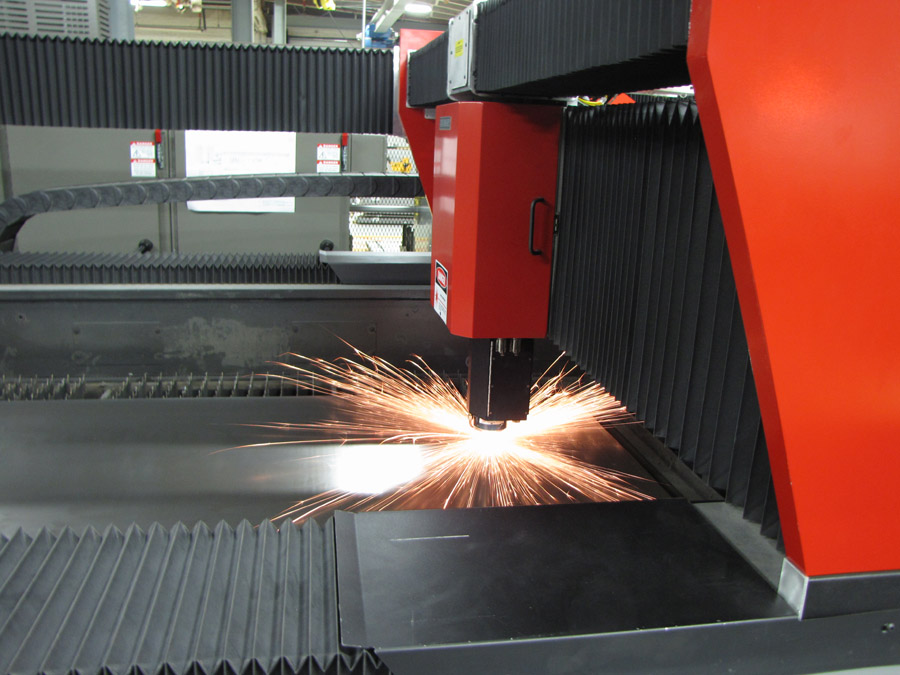 Midland Metal Products currently has two Cincinnati Inc. CO2 lasers on its shop floor with plans of a fiber laser investment on the horizon.

When it comes to bringing new technologies in house, McDonald doesn’t look at a piece of equipment as a standalone investment. He sees every aspect of the company’s operations as part of an overall system. This viewpoint helped drive the adoption of another Cincinnati product, its CI Scheduler.

The Scheduler software package does what one might expect. It schedules and nests parts on one or more lasers, similar to an MRP system. It is, therefore, the perfect complement to the Modular Material Handling System that Midland Metal Products is leveraging. But, it also works well with lasers not integrated with automation. When coupled with the MMHS, the CI Scheduler receives job completion information from the system and shares that information to automatically track material inventory.

“I’m focused on the systems integrations aspect of how they all work in tandem,” McDonald says. As an example, he mentions that the company wasn’t content with nesting software on its own. “We felt that the nesting software would only work if there was a robust ERP or MRP-style scheduling software that would look at the buckets we were filling. There needed to be something that would help us schedule those parts.”

Cincinnati Inc.’s Modular Material Handling System, or MMHS-100, similar to the one residing at Midland Metal Products, is flexible and expandable and can be integrated into one or more Cincinnati laser systems.

He uses the analogy of the laser system as an airport and the parts coming in and out as airplanes. The software, therefore, would be the air traffic controller. “Without a doubt, the biggest impact for going into laser operations, and especially with a material handling system, is short lead times.”

So not only did the company achieve its aggressive goals for ROI as well as shorter leads times, it also eliminated 30 to 40 OBI punch presses with its two lasers. Essentially, Midland Metal Products’ outcome paints the ideal picture of what happens when traditional business values and cutting-edge technology come together.