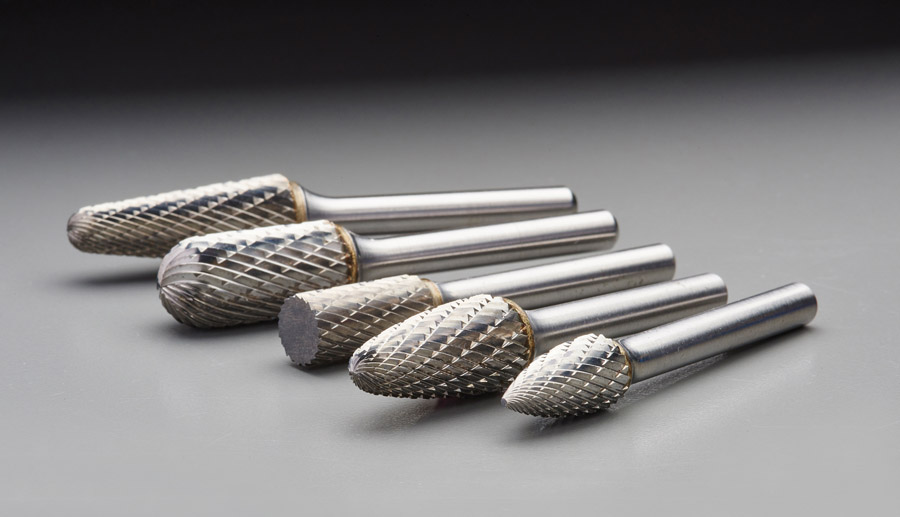 The reasons welders keep carbide burrs on hand are plentiful. Early in a welder’s career as skills are being improved, carbide burrs are helpful to make less-than desirable welds look acceptable. And in applications where aesthetics are a top priority, carbide burrs are essential – especially in tight joints where other abrasives can’t reach. They are also prevalent in situations where the surface to be welded requires some prep work.

Although some welders rely on carbide burrs more often than others – depending on the level of experience the welder has or the applications they’re working on – it’s important to understand that they are much more than a commodity-type product.

Carbide burrs are available in a range of sizes and shapes, including ball burrs that are rounded at the top and tree burrs that have a pointed tip. Because each shape is utilized for a different job – from hard deburring to finishing – welders often carry a collection of burrs with them to a job site. And while some may consider carbide burrs as a commodity item, they come in a range of quality and price. Unsurprisingly, a higher quality burr will offer more users a higher degree of benefits.

“We’re trying to put out a product that’s significantly better,” says Patrick Carroll, coated products manager at Norton | Saint-Gobain. “The double-cut style burr is the industry standard – it’s the most popular style of burr – so we had to make ours better.”

So how did Norton achieve a better burr? For starters, it was designed and engineered with a harder tungsten substrate than other competitive products. Additionally, Norton was able to identify an optimal tooth wedge angle that delivers longer product life with less changeover.

“It’s not as easy as just choosing the hardest tungsten carbide available,” Carroll explains. “If you go with a tungsten carbide that is too hard, it will remove too much material. It’s a balancing act between the hardness of the substrate and the optimal cutting angle. When you can zero in on that perfect balance, you can reduce the chances of chips breaking and provide equal wear across a broad range of applications, including weld prep.” 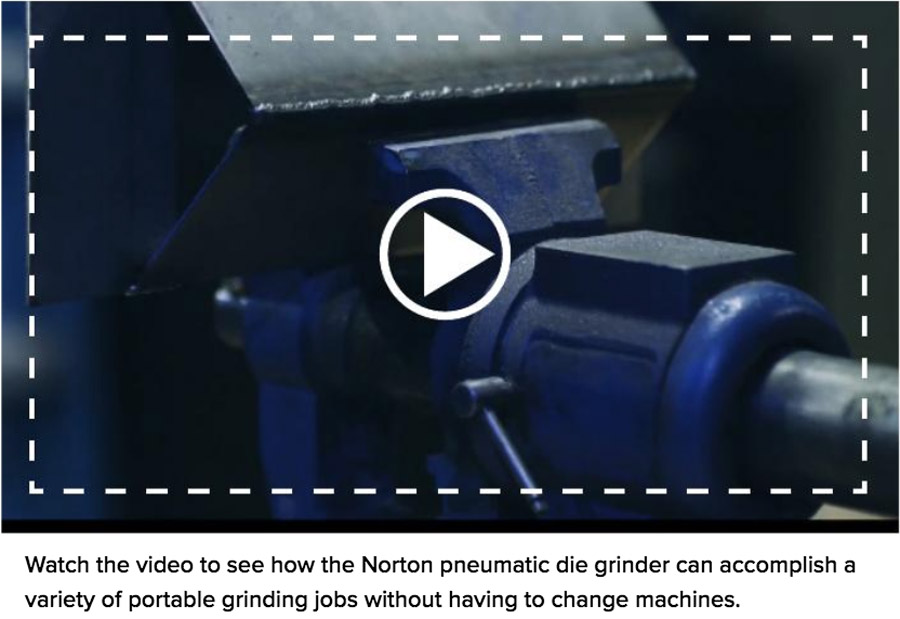 Norton’s carbide burrs are used on a variety of materials, including stainless steel, carbon, nickel, copper, titanium and cast iron. They also offer high stock removal rates on hard-to-grind materials. And when working at higher temperatures on high-speed steel tools, they are more heat resistant than competing burrs.

Just as there are different styles of carbide burrs for different applications, there are multiple ways that welders use them. They can be handheld, inserted into a die grinder or even automated for high-volume work. The most popular of these options for welders is being paired with a die grinder. To that end, Norton’s new pneumatic die grinder is available as a kit for maximum productivity.

The kit, which was recently introduced, offers four ways to finish a weld. Like Norton’s carbide burrs, the die grinder included in the kit was designed for long life and ease of use. For user comfort, a double-bearing spindle reduces the amount of vibrations coming off of the tool, while a non-slip grip and lightweight design reduce operator fatigue. Combined, operators benefit from better control of the tool.

In addition to the die grinder, the kit includes four supporting tools: a carbide burr, which offers significantly longer life; a mounted point that provides added forgiveness; a flap wheel; and cartridge rolls for reaching into corners where the other abrasives might not fit.

“In the old days, customers would want to do weld prep or finishing in just one step,” Carroll says. “But today, many of our customers are willing to use a two- or three-step process. The kit’s four options allow you to do everything from hard deburring to finishing.”

For welders that rely on a range of carbide burrs, Norton has a kit for that, too. Each kit includes the following five burrs: SA5, SF3, SF5, SG5 and SL4. The letters refer to the shape of the burr, whereas the associated numbers refer to the size.

The SA5 is a cylindrical burr without an end cut, which is a flat burr without cutting edges. It’s used for contour finishing and to get into right-angled corners. The SF3 and SF5 are ball-nosed tree burrs designed to round off edges and make concave cuts. The SG5 is a tree burr with a taper for accessing hard-to-reach areas, such as angled contours, and the SL4 is a ball-nosed cone burr that’s ideal for delivering fine finishes. 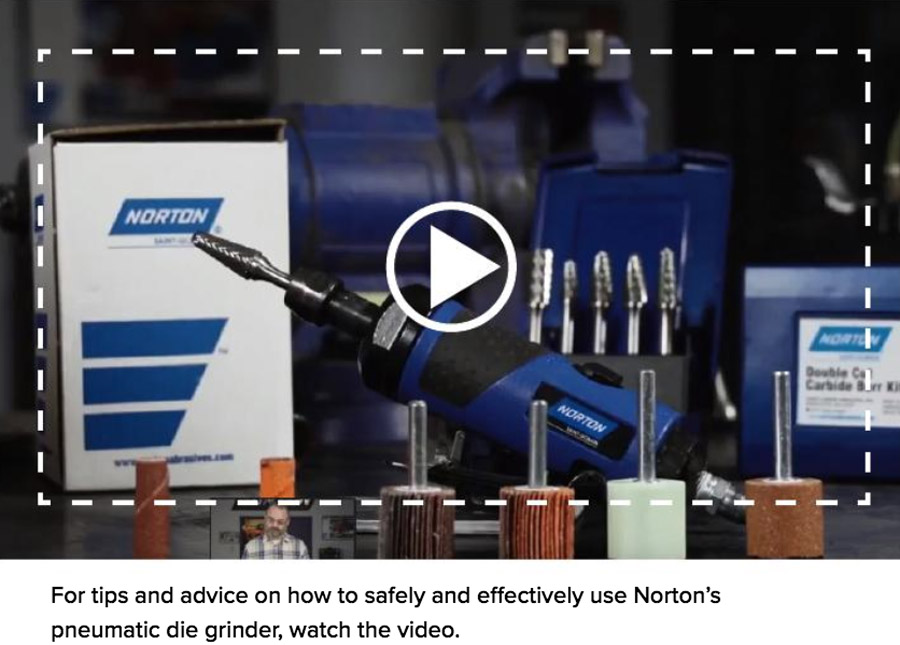 To ensure that the products and kits deliver on what operators need, Norton took a different approach with the product launch. Typically, the company would release a product to a large region, such as North America, but with the goal to reduce the commodity stigma from the carbide burrs, the product first launched in Texas, where welding-heavy industries such as oil and gas are prevalent.

During the launch, Norton asked for customer input and feedback on the carbide burrs as well as the die grinder, which resulted in the idea to release them separately and as a kit.

“Our customers are starting to demand a systems approach. The feedback from our initial launch in Texas was invaluable,” Carroll says.

In addition, the company puts the Norton name on every burr – “anything that we market under the Norton name needs to be high quality,” Carroll says. The company also puts the part number and the run number on each burr so in case there’s an issue, Norton can trace back to that information to avoid future issues.

Beyond their use in welding operations, like those taking place in the Texas oil and gas industry, it’s important to remember that carbide burrs are required in a variety of industries. The products are also useful in foundries where flashing and die lines are common, shipbuilding and automotive, and MRO. Essentially, they can be found in the toolboxes of anyone that needs to address total productivity and stock removal. 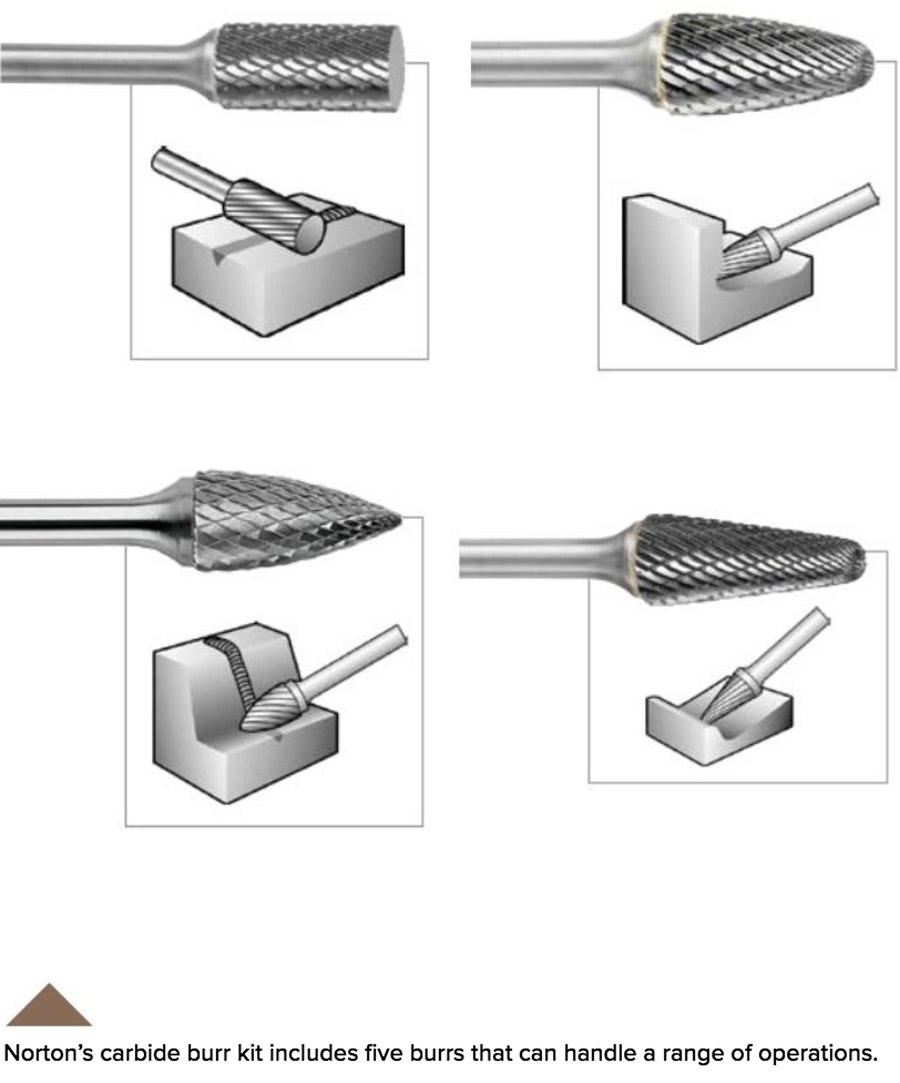