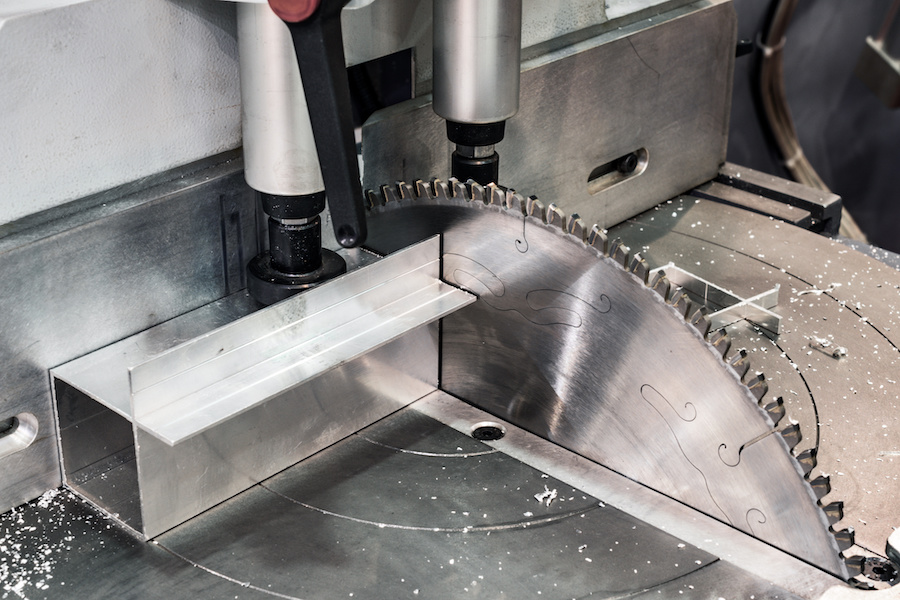 Bandsaws dominate the market as a metal cutting solution that offers reliability, cut quality and low cost of entry. However, when the need for speed comes into play, it’s difficult to beat

the power and quickness of circular saws. Also, with the right blade and fluids, operators can achieve a mirror-like finish, something bandsaws can’t come close to replicating.

Sawing Productivity takes a look at the circular saw options available today that the marketplace has been asking for as well as the technologies behind them. From a saw designed to cleanly cut through Inconels with an abrasive wheel to high-speed, fully automated carbide blade machines that can run lights out, options are available for every need in the market.

Behringer’s HCS series of high-performance circular cold saws includes the HCS-160, which is a high-speed carbide circular saw that has proven its worth for a number of years. The new model features a host of innovative ideas, such as its multi-fluid capability.

“The idea of a circular ‘cold’ saw is that the heat from the sawing process is removed in the chip and not introduced into the material or saw blade,” Klipp says. “By adding multi-fluid, we have taken this cooling process to a higher level, and therefore, can take the removal rates to the highest levels in the sawing industry. Heat generation is what sets the limit on circular sawing, and by allowing for a cooler process utilizing multi-fluid, we can push the blade harder and faster.”

Klipp says the HCS-160 was developed “with an ear toward helping our customers generate parts faster while also reducing costs and generating positive ROI.

“The significantly faster sawing capability,” he adds, “particularly when combined with automated material loading and output sorting, allows for a less labor-intensive process. Not only are parts produced faster, but with full automation, the process can be supported with fewer operators and, therefore, lower labor costs.”

When high productivity is the catalyst for cutting tubes, profiles and bars, the TS72 CNC circular saw from BLM Group offers reliability, precision and an extended range of applications.

The automation factor is a huge component for manufacturers, says Andrea Salizzoni, product specialist for saws at BLM Group. As an example, the TS72 is built to work with a bulk loader, tube feeding system, cutting head stroke, cutting parameters, unloading capabilities – all settings that are fully automatically adjusted and optimized by the machine according to the tube being processed.

“All manufacturing processes are focused on the highest performance possible,” Salizzoni says. “Manufacturers are constantly trying to increase their efficiency and improve quality on the shop floor, which has dramatically changed in the last 10 years. This is a market asking for many small batches of tube with high demands of quality in terms of external integrity – dents and marks are not acceptable.”

For automation to be highly functional, there has to be robust software behind it. For BLM, that software is Protube Enterprise, which allows operators to prepare work orders, send them to the machine, make accurate time and cost estimates for every job, and monitor job progress.

“Transferring the work orders automatically to the machines and knowing the status of the production every moment is fundamental for the organization of production and logistics,” Salizzoni says. “That’s why we developed Protube Enterprise, a software that’s able to establish a double communication channel to the TS72, easily send out work orders and receive status of their progression.”

The pandemic has destabilized economies throughout the world, which means demand for all types of manufacturing equipment, including circular saws, has been strained. However, Max

Harris, chief engineer at HE&M Saw, says there is now pent-up demand for cutting solutions that can live up to a myriad of expectations, such as the need for accuracy, speed, surface finish and material optimization.

“Even with the recent global health issue and resulting slowdowns,” Harris says, “world economies are starting to rebound, and the demand for manufacturing equipment is also rebounding.”

The company’s line of circular saws is part of the solution manufacturers are seeking out. The KTC line of automatic, high-speed circular sawing machines are available in five sizes, and are all engineered for faster cuts, increased production, repetitive accuracy and a higher level of automation. The KTC machines come standard with auto-loader systems, which allow operators to stage material so as the cut on one piece of material is completed, another piece is automatically loaded, making the part production seamless.

For manufacturers considering bandsaws and circular saws for the same application, Harris says the distinction that might influence them to go the circular saw route is the ability to cut faster than a bandsaw, but there are other advantages, such as the quality of the cut.

“The surface finish of the cut is much better with a KTC circular saw, and this can mean much less secondary machining, or in many cases, perhaps none at all,” Harris says. “In addition, the level of automation included with the KTC line offers the ability for some applications to run ‘lights-out’ without an operator being present.”

Kalamazoo Industries Inc. went the extra mile for a customer that required a large, hard-material cutting solution that could get the job done fast. Engineers developed the K36, a unique 36-in. abrasive wheel cutoff saw designed to cut large pieces of Inconel. The saw was specifically developed for a company manufacturing jet engine blades out of 7-in.- to 10-in.-dia. Inconel, making up to 250 cuts per day.

Scott Allen, president of Kalamazoo Industries, says the goal was to develop an abrasive saw with the right blade and horsepower to cut large, hard material in production situations and metallurgical applications. Typically, metallurgical cuts are those that are not burned or discolored, so the metallurgist can etch and inspect the internal material to see if it meets various specs. Some metallurgical cuts require a smooth, bright mirror-like finish. Achieving this finish eliminates or reduces polishing time, which is something the K36 is designed to do.

“In production cutting, the speed at which hard materials are cut is critical, and bandsaws will not achieve the cutting time needed to lower the cost per cut,” Allen explains, adding that the K36 can cut through 7-in.-dia. Inconel in less than 30 sec.

And they haven’t stopped with the K36. Kalamazoo recently developed a similar saw with a larger 44-in. diameter blade called the K44E. It’s being used by a heavy equipment manufacturer for sectioning large cast digging points. It’s also being used by a company in Pittsburgh that cuts refractory material with a 44-in. diamond grit edge blade.

For years, the KastoVariospeed C15 has been the CNC-controlled, fully automatic production circular saw for solids, profiles and tubes with a high-speed steel or carbide blade. It is a go-to

machine for manufacturers looking for the ability to change orders easily and automatically with minimal manpower. Recently, the German-based company introduced the KastoVariospeed C18, which has all the automation of the C15, but is capable of cutting larger material with a high degree of accuracy.

Ralf Moser, sales engineer at Kasto, says the ideal users of the variospeed line are steel service centers. The automotive industry has also taken note of the C18, he says, as have customers who require the flexibility of jumping from one type of material to another with minimal effort.

“For example, they might have five cuts of round solid bar for one order and the next order might be 10 cuts of square tubes or profiles and so on,” Moser explains.

When speed isn’t of the essence and the material being cut is appropriate and a mirror finish isn’t required, bandsaws can be a more logical choice. But Moser says it’s not unusual to see a bandsaw user jump to a circular saw.