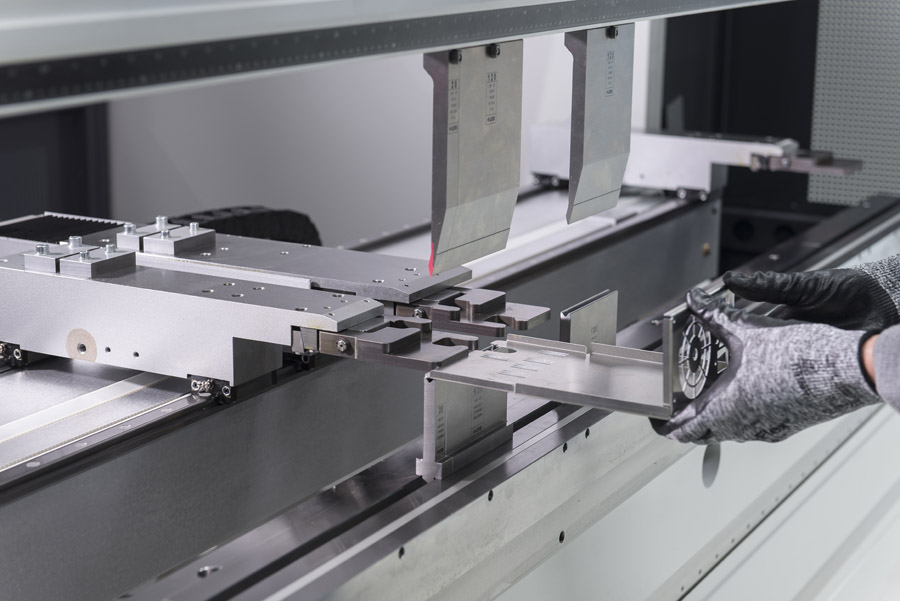 Achieving the perfectly formed sheet metal part, whether simple or complex, involves a number of variables, including the method of bending. Sheet metal bending methods are those in which force is applied to a piece of sheet metal causing it to bend at a given angle to create a desired shape rather than remove any material.

There are a few basic bending methods and each involves considerations for the angle of the bend, machine tonnage, tooling, material hardness and material grain direction.

Determining which bending method to use is dictated by the application requirements. Is a small inside radius needed? How thick is the material? Does the material have a high tensile strength? Every metal reacts differently when force is applied; the method of bending greatly effects that response. 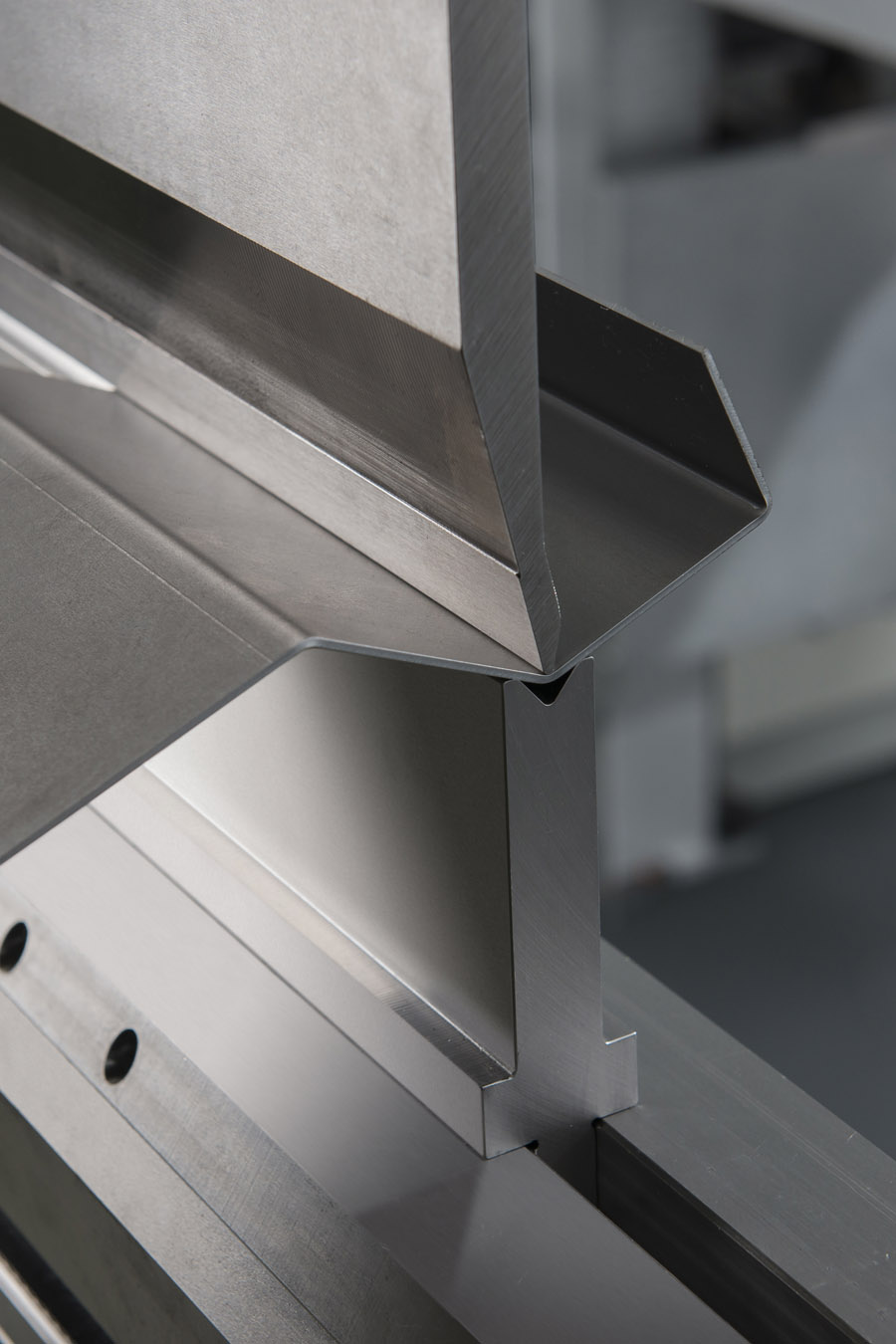 The technique is highly flexible as well as cost efficient because with a single die and punch, all angles larger than the angle of the punch or die can be formed. The same tooling can be used for multiple material thicknesses because the angle is being formed by the positioning of the ram.

However, a word of caution: This same tooling flexibility can also work against you if the wrong tooling is selected. For example, if you have a flat of 140 mm and you are bending a U profile with two flanges equaling 50 mm each and you choose a straight punch instead of a gooseneck, you will have a collision. 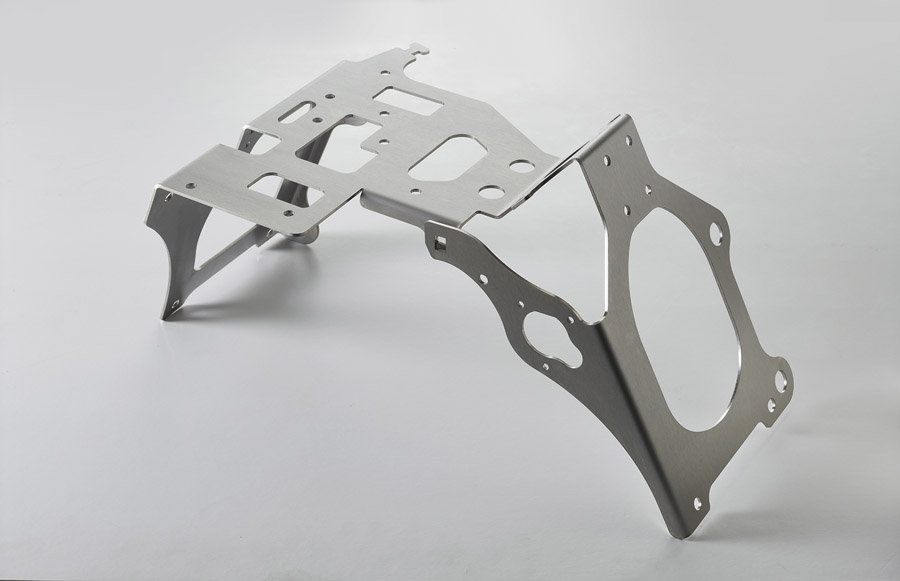 During the bending process, a workpiece is placed on a die and horizontally positioned against stops. The bend angle is produced by a punch, forcing the workpiece into the die.

With air bending, less force is needed than in other bending techniques, which ensures the longevity of tooling and lower cost of machinery.

While air bending is popular for these reasons, this method also has the most variables to consider. Springback, bend allowance and angle correction are just a few of the factors that must be accurately calculated. For instance, springback increases in proportion with the tensile strength of the material. The material thickness also influences the amount of springback.

If the thickness is 20 percent higher, the amount of springback will be 0.3 degrees less. Making these calculations can pose a bit of a challenge.

To calculate springback, for example, take a material sample and program the press brake for a 90-degree bend with a zero springback factor. If you get a 93-degree bend, it means your springback is 3 degrees. 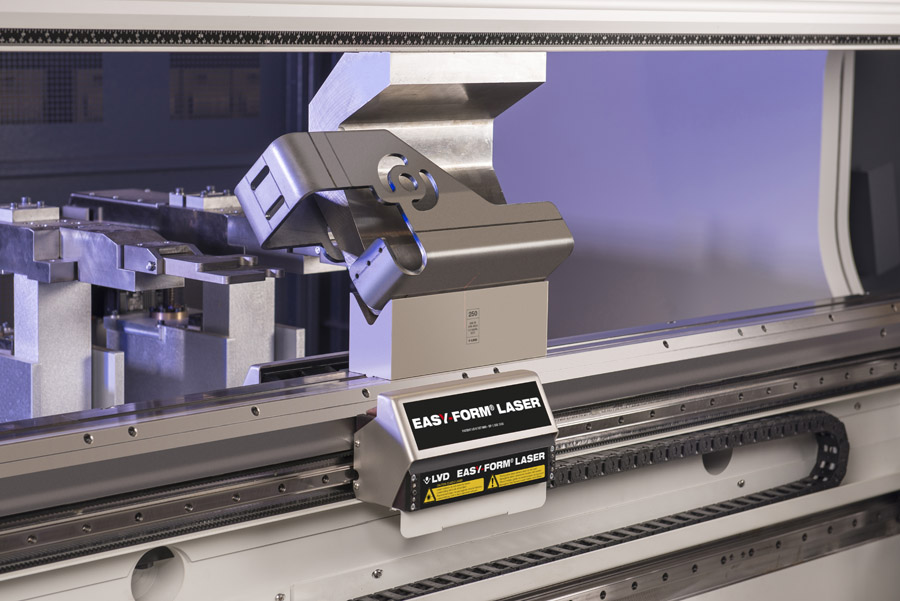 With adaptive bending, the same tool setup is used as in air bending except that the punch position is not pre-set to a particular value. The position of the punch is controlled through the in-process angle measurement system.

Today’s adaptive bending technology provides a solution to control the bending environment in support of the air bending method and relies less on the operator’s skill level.

Adaptive bending is a type of air bending. In this method, the bend angle itself is controlled. The same tool setup is used as in air bending except that the punch position is not pre-set to a particular value. The position of the punch is controlled through the in-process angle measurement system.

In contrast to air bending, the resulting bend angle is no longer influenced by the material thickness or strain hardening of the material. The angle measurement system feeds data back to the control during the bend process. The control then calculates any needed adjustment in real time and sends the new values to the machine. As a result, adaptive bending has a high accuracy. 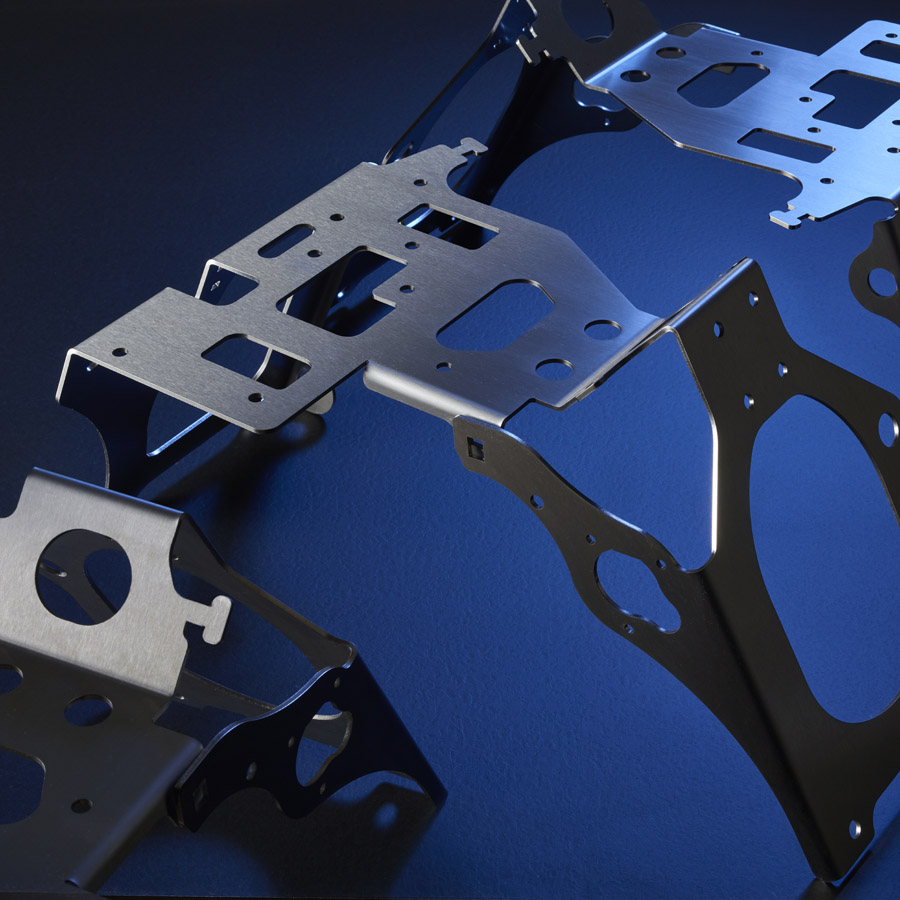 Producing a perfectly formed part begins with selecting the right bending method for the application.

Adaptive bending offers several advantages: Manual test bending and correcting are eliminated as is the need to check parts within a batch run. Additionally, scrap and setup time are reduced, as is operator involvement.

Most press brake manufacturers offer some form of angle measurement technology, though there is variability between these systems.

Beware of any system that significantly increases cycle time. A true real-time angle measurement system provides feedback to the machine control for positioning of the ram to produce an accurate bend without secondary compensation.

Systems that do not operate in real time take a measurement of the angle at a ram position above what is required to create the bend. From the measurement taken, the system then calculates the final position to create the accurate bend angle. This all takes time, which significantly slows the cycle. 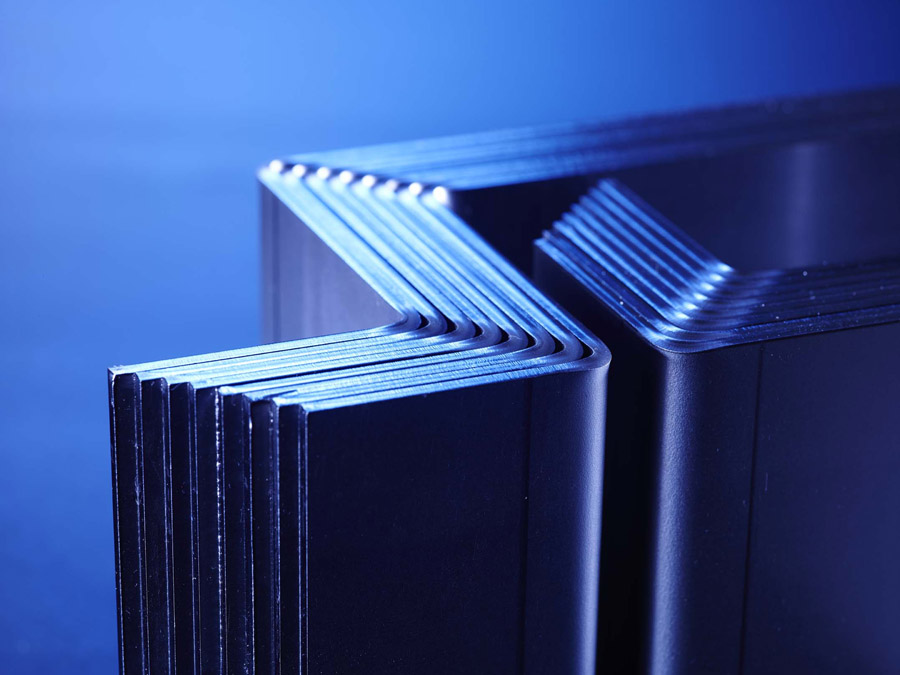 Bottom bending has the advantage of greater accuracy. Bottoming also results in less springback than other bending methods.

When bottoming, sheet metal is pressed against the sides of the die allowing some space between the sheet and bottom of the die. In bottom bending, the bending force is the determining factor. The die angle should match that of the desired bend angle with a minor degree difference to account for springback.

The depth of the punch determines the bend angle. The required force is less than that used when coining yet greater than that needed by air bending.

Bottoming is mainly used when processing thin materials with little variations in material properties and thickness as well as narrow Z-bends and special profiles. 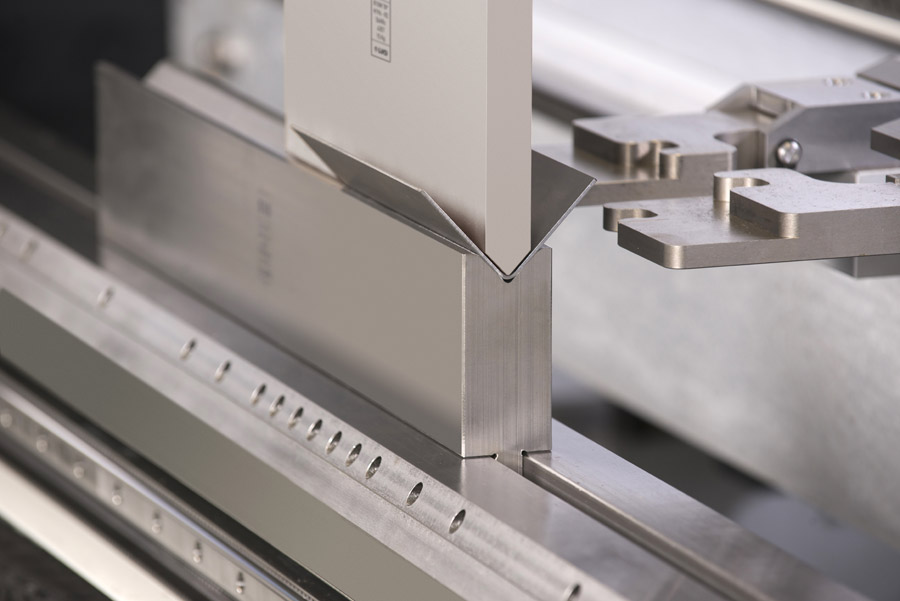 When bottom bending, the sheet is pushed against the sides of the die and the depth of the punch determines the bend angle.

In a production environment, bottom bending produces better part consistency than air bending, and bottoming is not impacted by minor variations in material thickness and properties.

In sheets less than 1 mm thick, bottoming is virtually the only method used – certainly for angles of 90 degrees. It provides an angle accuracy of ±0.25 degrees while air bending only delivers an accuracy of ±0.5 degrees.

Whereas an advantage of bottom bending is greater precision, a significant disadvantage is in the thickness of the material. Typically, material thickness can’t be greater than 1/8 in. for bottoming.

Each material thickness and hardness requires a different tooling set. With the increase in tonnage requirements, the possibility of ram upset is always a factor. Ram upset causes the machine ram to be permanently deflected in the vertical plane. As a result, the distance between the ram and the bed is greater in the center of the machine than at the ends. 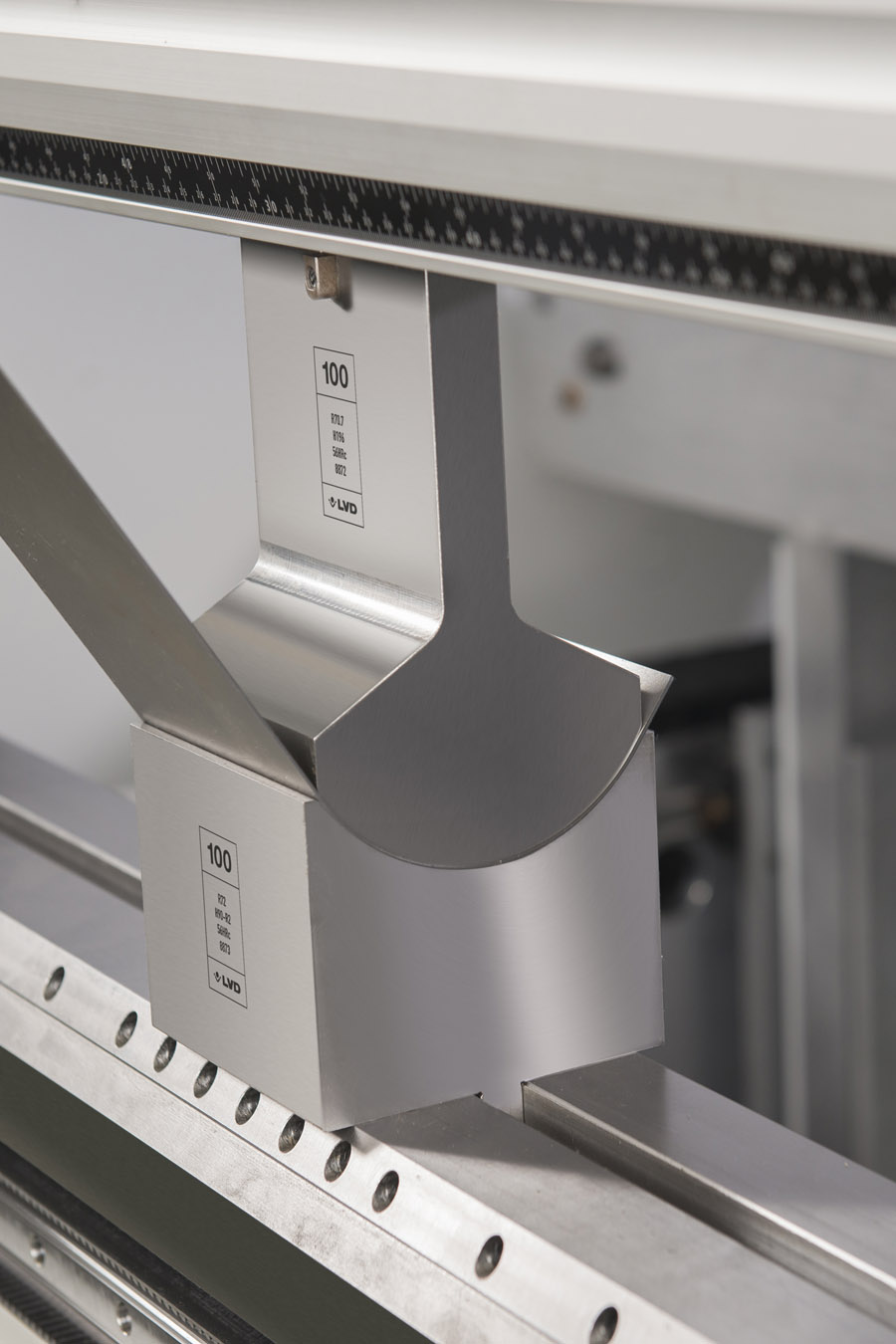 In coining, the sheet makes contact with the sides of the punch and die. The bending result is determined by the pressing force.

The coining method requires a great amount of tonnage to conform the sheet metal to the exact angle of the punch and V die being used. During this process, the sheet is pressed into the bottom die, which causes a thinning of the material.

Similar to bottoming, coining requires the tooling to match specific to the desired angle. The high amount of pressure on the sheet relieves internal stress of the material, which eliminates springback issues.

It’s important to know that coining is not affected by minor variations in material thickness or properties; it is only affected by applied pressure. Coining is used to produce a very sharp bend, for bending specific parts with very large or very small radii, or for forming narrow Z-bends or other profiles.

Because coining utilizes the tooling and force to create the bend angle, it does not need to calculate the bend allowance or springback. Therefore, a distinct advantage of the method is that it does not require sophisticated CNC press brakes. It does, however, require very large tonnages compared to all other bending methods – up to 10 times more tonnage per foot than air bending.

Other advantages of coining can be found in its high repeatability and capability to produce a very small inside radius. Disadvantages of coining fall to the wear of the machine, tooling limitations and wear and high tonnage requirements. Because of these restrictions, coining is mainly used in specific applications consisting of thin material that requires small inside radii, such as electronics.

Sheet metal bending is truly an art. Achieving the perfect bend involves a number of considerations, chief of which is choosing the right bending method for the application. When in doubt, consult your press brake manufacturer for guidance on selecting the best bending method specific to your requirements and press brake.