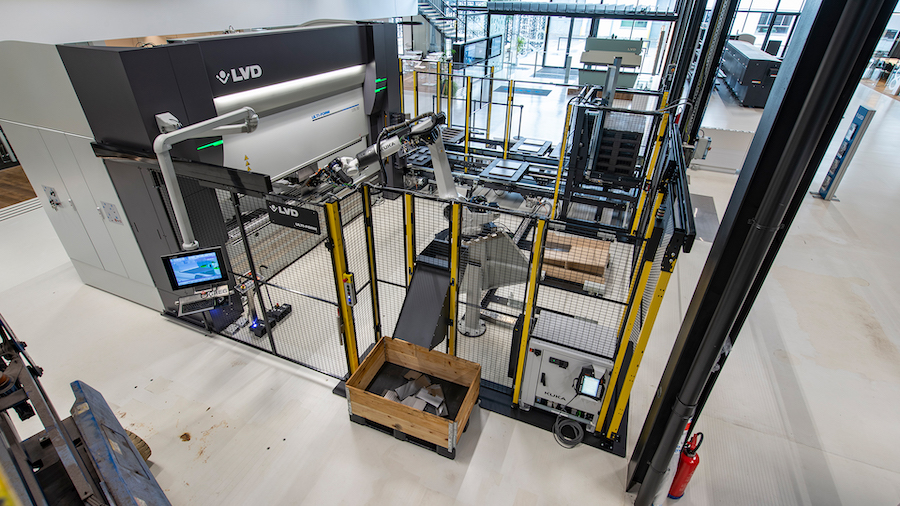 Not so long ago, automation in manufacturing was relegated to high-volume, highly repetitive jobs or jobs that involved a high risk of injury. The cost of the automation was

amortized across large batches to reduce the cost per part. The robot had to be taught all the movements for each application, necessitating a highly skilled robot programmer.

Back then, automation was just beginning to walk, but today, the use of automation is running at a full sprint. Industrial robots are more intuitive and accessible than ever for those without formal robotics training. Software advancements have made fast, automated offline programming a reality.

According to the International Federation of Robotics, the use of industrial robots in manufacturing is growing with an estimated 1.7 million new industrial robots in use in 2020. Some countries have put in place economic stimulus and incentive programs to promote the integration of robots in manufacturing. Exponential technologies have accelerated more in the last five years than they have in the last 50, and with this transformation, companies are increasingly moving to automation.

In sheet metal fabrication, automation has advanced the process of bending – one of the most labor-intensive operations on the shop floor. User-friendly, cost-effective automated bending systems offer fabricators higher productivity, more accuracy and better profitability across a range of applications, including small- to large-batch production and complex parts.

In the past, the setup costs on a robotic bending system could be considerably more expensive than the setup on a manual press brake. A significant amount of time was spent planning and programming to produce a single part. Setup could also involve scrapping hundreds of blanks to prove out each bend and debug the system. So, without high volumes, automation was difficult to justify.

But now, it’s all about the cost per part. Fabricators look to automation to shorten the “order to cash” cycle to find a better and faster way of getting from “art” to part. If the cost of an automated bending system is too high, the cost per part will be too high and the only way to make the investment pay off is through volume production. But today’s market demand is primarily for high-mix, low-volume, complex part production. High-volume and, consequently, large batch sizes that were ideal for hard automation are in decline around the world. That’s why, to fit current needs, the cost of an automated bending system should be no more than twice the cost of the press brake.

The modern robotic bending system offers next-generation features that are changing the state of bending automation.

1. Automated, offline programming: Advanced software makes integrating automation and robotics easier, faster and more cost-effective than ever before. Programming for

the press brake and the robot is fully automated and handled offline with no need to “teach” the robot. Software is able to determine whether there is enough grip force to handle the part, calculates the robot speed in function of inertia during movement of the part, looks at the reachability of the robot and considers collision avoidance.

Powerful applications that are automated include automatic tool shape selection, bend allowance, bend order calculations, interference identification and ram cycle optimization. The software also creates a program to stack or nest finished parts or place them in a bin.

The Ulti-Form robotic bending system  can prepare a part program in 10 min. or less and set up the cell for production in 10 min. or less, including providing a full 3-D bending simulation. In 20 min. or less, the system is ready to start bending. The technology uses a simple touchscreen interface and requires no specialized robotics skills. Part of the attraction of the modern robotic bending system is that a skilled programmer is not required. Also simplifying the interaction is that the entire system uses one operator interface so there is one controller for both the press brake and robot.

The Easy-Form Laser angle measurement system ensures a bend angle within ±20 min. for mild steel and stainless steel. The system instructs the press brake to adapt to material variations, such as sheet thickness, strain hardening and grain direction. It automatically compensates for any changes by adjusting the position of the ram or punch to achieve the correct angle – all without slowing down the bending process.

3. Flexible design: In the past, even a small automated bending system for parts weighing less than 35 lbs. required more than 1,000 sq. ft. of floor space to accommodate the numerous components the system required. In addition to the press brake and robot, there would be fencing for safety, a system entrance, incoming pallet station, rack for additional robot grippers, double-blank detection station, squaring table, bending tools, rack for additional tools, regrip station, outgoing pallet station and a system exit. The size and scope of these systems added to planning, startup and layout costs.

Today, automated bending systems are much more compact in composition and are designed for quick installation and startup. These systems also allow for manual production.

The Ulti-Form system automates material handling and bending in a space of 26 ft. by 32 ft. (8 m by 10 m). The input zone has three input pallets on an inclined plane for easy picking and pre-centering of parts to eliminate time for referencing. The output zone can have up to 10 pallets, an automated pallet dispenser and a conveyor system to move finished parts outside the cell, which frees space inside for long production runs and allows completed parts to immediately move to secondary operations.

The system easily moves from one job to the next, and with a high input of raw material and high output capacity, long production runs are possible. An access door allows quick feeding of new material, easy access to the finished parts and easy removal of completed parts. Unlike the robotic bending systems of the past, the material handling process does not require manual planning and programming.

The robot gripper – one of the most critical components of the entire system – is also more capable. Many fabricators already enjoy the productivity of automated loading and

unloading on their laser cutting and punching machines. When the blank size changes, these systems simply activate a different group of suction cups. At the press brake, however, part geometry changes with each bend. To handle a single part, the gripper must be configured to fit each step through the bending process. As a result, grippers are usually customized for the application.

The Ulti-Form robotic bending system uses a “universal” gripper. This single robot gripper adapts to fit a variety of part geometries. The device combines gripper configurations to fit part families. It saves investment in custom grippers, saves changeover time and is another way the automated bending cell is able to keep production continuous and uninterrupted.

An auto tool-changing press brake is at the heart of the Ulti-Form bending system. The press brake houses a built-in tooling warehouse configured to suit the user’s bending requirements (e.g., different tooling radii, V-opening). It uses a gripper mechanism in the machine’s backgauge fingers to change tools. The press brake and robot work synchronously to keep changeover time to a minimum. As the robot picks the first workpiece from the input stack and centers it, the press brake completes the tool change. Tool setups are programmed offline as part of the bend program. Tool parameters are stored in the software database.

Bending sheet metal may seem like a simple process, but it’s one of the most nuanced operations in the fabrication shop. Automating bending simplifies the process by using software and machine technology to orchestrate the forming operation and the production flow.

An automated bending system can run unattended through lunch, breaks, off hours and at night. It delivers consistent accuracy and throughput, reduces turnaround times and lowers the manufacturing cost per part. Today, fabricators can be even more confident when making the investment in a more flexible production process.