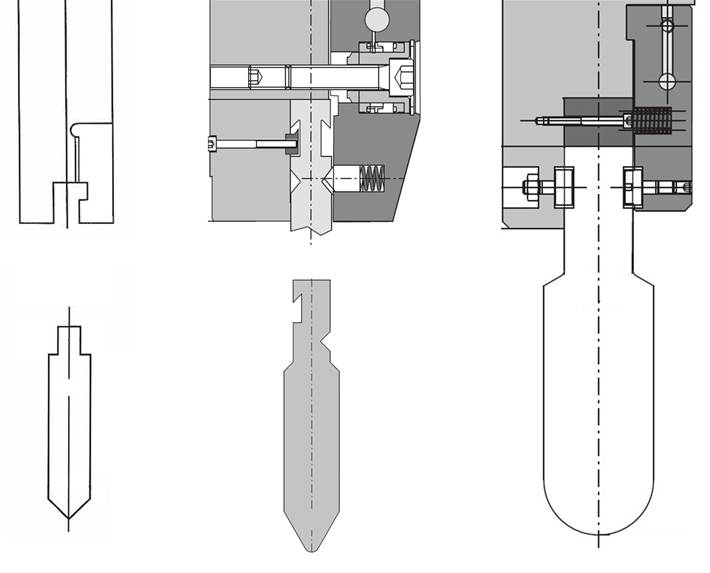 Editor’s note: The following is one side – the expert side – of a conversation held with Bystronic’s Paul LeTang. Paul is the go-to expert on tricky bending tasks, especially with high-strength steels

With high-strength steels [we’re talking about steels with yield strengths on the order of 100,000 psi yield, such as the advanced high-strength automotive steels ] we’ve got to deal with machine deflection, and then we also have to deal with the concentrated load on the machine. With a press brake, your ram is kind of a linear beam. You’re concentrating a load basically on a line. Normally, a typical machine can handle somewhere around a hundred tons per foot. If you have a 10 foot machine, you could put a thousand tons on 10 feet. Everything would be fine. What happens if it takes 1500 tons to bend 10 feet? Trouble.

Most of the press brakes in the world were designed to bend somewhere under that 100,000 psi material. Now, we get into the high strength materials. Often we need larger load bearing surfaces or elements; the part of the machine that touches the tooling has to be bigger, stronger, wider, harder. The machine itself doesn’t yield, although it deflects.

Progressively to the right, tooling becomes more robust for bending high-strength steel. It gets heavy; rollers help in getting it in and out.

It’s the tooling, more than the machine, that has to be special

You have to increase the load bearing surface. Often on a press brake, the ram is necked down a little bit as you get down towards the punch.

If you take a cross-section of a bending ram, the thickness of the ram itself, front to back, might be four, five, or six inches.

When you look from the end of a press brake, you might see the thickness of a ram in a larger machine being five inches thick. It starts tapering down from there, because the tip of the punch, where we’re bending, we want to concentrate it on a small spot. You have a step-down or a necking down, it’s like an upside-down pyramid.

When you get into the higher strength materials, normally where that stepping down occurs, on that upside-down pyramid, it’s made a little bit flatter. The beams themselves, the upper beam and the lower beam, don’t change very much if at all for bending high strength material, but how the tooling is adapted into the machine is significantly different.

If you call up any of the press brake tool suppliers and you ask for a typical punch, it will have typical load bearing surfaces. Once you get above that typical tool, it’s a little bit in the hands of the machine designer, because how the beam is made, and how the punch holder is made for these higher strength applications, comes from the machine designer — how they design the punch holder, and then how they design the punch.

Where the tool fits into the tool holder, it would be larger and wider. It’s normally a custom tool. Once you get into what I call the “Stratosphere,” above 100,000 psi yield strength, the tool is a little bit customized, because all the press brake manufacturers have different size beams. They have different size punch holders. In some cases, the punch holder is machined right into the ram that is not a separate removable element. Instead of having a pyramid that’s stacked up, you have a pyramid that just cut right into the ram.

The upper tool holder now is larger, the upper tool is larger, and so the load bearing surface is larger. Now, the machine operators are dealing with bigger, heavier elements. Often at the same time, these tools and tool holders are made larger. They’re also made with roller bearings to make it a little bit easier to slide the new tools and the tools out when you’re changing the tools.

If the punch weight a hundred pounds, one operator could pretty easily slide the T top of the punch into the T slot of the ram. Now, if it weighs a thousands pounds, you have a lot more friction.

If you’re bending a part with a small nose on the parts of tight radius, you’re concentrating all the force into small spot and the material would tend to crack. When we put a large radius on the punch, when we start pushing, now we’re wrapping the material around the larger diameter, the radius that distributes the force a little bit more evenly across the material. It also makes the punch heavier.

Some manufactures machine this into the bed, and some make them bolt-on. Even when they’re bolt on, they’re normally not intended to be replaceable or removable. It’s just a way of manufacturing them, which varies by manufacturer. It is a little bit scary for customers trying to spec such a piece of equipment, because if it’s not spec’d right, it’s very expensive or difficult to change later in the field.

Getting the bend right

When you’re bending strong material, there are a couple of ways to deal with getting the bend right. The classic system is the operator makes the bend. He checks his angle all the way down. When he find that there’s a variation in the angle, the angle is opened a little bit, he takes a piece of banding, crate banding

he lays it on top of the bend plate and then brings the ram down and hits it again in the same spot with the same force. Now, you have a little bit of extra thickness there from the banding, and that compensates a little bit for your deflection.

That’s a very common method in the high strength industry. Then if your variation is small, the operator takes what they call the “Magic dots.” What happens when you bend the steel plate, especially with the high strength materials, there are a lot of scales that come off. These scales are very hard. They’re like glass. They look like black dust.

What the operators will do is they sweep up a little pile of it. If they need to bend a little bit harder, they’ll lay on some dots and cycle the machine again. This is a lot thinner than the steel banding. It’s a more precise adjustment. This is what a lot of people were doing in the past when bending high strength material.

The next step-up, the next improvement in the process is some type of an adjustable crowning table that changes the radius of the bed. These do the job very well.

There is little off-the-shelf tooling

Tools are usually made to order. You’re not going to find a lot of off-the-shelf tooling for high strength material. I think Wila has some, but, generally, there’s very little available.

Probably 95 % of the press brakes in the world are 350 tons. Most people bending harder steel are in a different category. Then you see machine tonnages between 500 and 1000 tons. Few people have those capabilities. The machines are expensive. The associated tooling is expensive as well. You really don’t see much of the tooling wearing out or being damaged.

A little bit of less expensive alternative in some applications is to take two smaller machines, set them side-by-side and synchronize them. Instead of having 1000 ton 20-foot press, you’d have two 500 ton 10-foot presses, side-by-side and synchronized. This is not necessarily dedicated for high strength material, but however, high strength material is also high expense material. If I underbend the part and I have to hit it and bend it a little bit more, all I have done is wasted a little bit of time, but if I overbend the part … When you’re bending mild steel, your springback is about 2-3 degrees. Your springback variation is about 0.2 to 0.3 degrees, which is almost immeasurable. In the high strength material, 15-20 degrees is a typical range. Everything being equal, everything being perfect, you could easily misfire by a degree and a half.

That can be expensive.