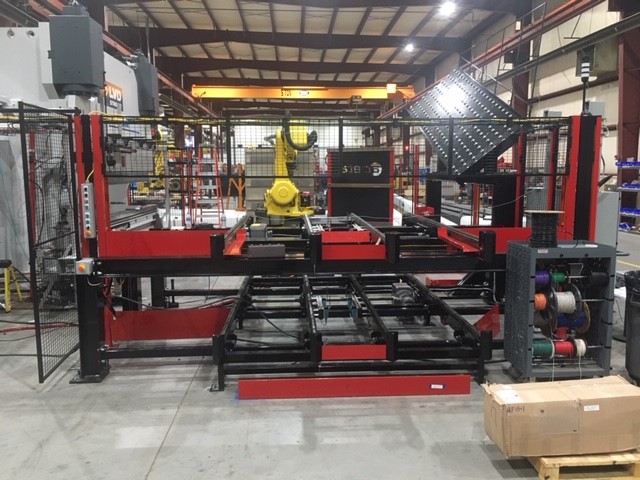 Chicago Metal Fabricators has been fabricating metal for 112 years. An incredibly diverse custom fabricator with production facilities in Chicago and in the suburb of Elk Grove Village, the company handles heavy materials – from 3/16-in. to 7-in. plate as well as lighter materials down to 20 gauge – serving an equally diverse customer base that includes rail, construction, aerospace, point-of-purchase, defense and off-highway industries.

Amidst a global pandemic that’s forced many fabricators to pivot their manufacturing, Chicago Metal Fabricators has kept its course steady, continuing to supply metal parts to feed essential businesses. One of the ways it has stayed relevant is through automation.

“On higher volume work, we’ve moved toward automation to be more competitive,” says Randy Hauser, president of Chicago Metal Fabricators. “Like most manufacturers, it’s difficult for us to find skilled operators, which is another reason for using automation.”

“By nature, automation is socially distanced due to the safety guarding aspect of the machinery,” he adds. “The fact that robots don’t sneeze or breathe also helps maintain health guidelines.

Hauser and his team turned to automation to address the challenges of a new high-volume rail industry job that requires high-tolerance laser cutting and formed parts. Of the four parts that comprise the project, the largest one is 70 percent of the workload, a 1/4-in. part that requires 300 tons of bending force.

Applying their expertise with heavy metal parts, the team was able to develop manual tooling to achieve the necessary tolerance requirements utilizing its existing press brakes. However, the manual process was slow and challenging and could not efficiently achieve the output needed to meet the high volume. It was not a sustainable way of working.

“We knew we could get the project started,” Hauser says, “so we built custom tooling to form the part, but the tooling required about 950 tons per hit. We have a 1,500-ton and 1,000-ton brake, so we were able to do it manually but couldn’t achieve the long-term volume requirements.”

This led the company to consider a precision press brake and precision tooling to air bend the parts with high accuracy.

“This is a difficult part to form,” Hauser explains, “and we needed a higher tonnage brake that was high precision with high build quality that could tackle the job. That’s one of the reasons LVD came out on top – because the quality and precision is high, particularly in the higher tonnage marketplace.”

Chicago Metal Fabricator’s LVD Easy-Form 400-ton, 4-m press brake features a built-in real-time adaptive process control, the Easy-Form Laser system. This technology delivers a high level of quality assurance. Without the need for calibration, the system adapts to material variations, including sheet thickness, strain hardening and grain direction, and automatically compensates for any changes. As a result, the formed part is accurate from the first bend and there is repeatable accuracy in the bending process. With no part failures, there is a high degree of process stability and consistency.

The accuracy of the press brake is especially critical when working with heavier gauge materials where material variations make a big difference.

“When you air bend on higher yield materials, you get a lot of variability, so it’s crucial that the brake can adapt to that,” Hauser says.

To form the parts at high volumes, Hauser enlisted automation technology integrator Acieta to integrate a Fanuc R2000-iC/210R robot with the press brake to create a bending cell.

“When this product is running heavy, we ship almost 1,100 parts a week,” Hauser explains. “We integrated the robot to be able to handle the volume. It’s fast over the long haul. With the robot, we get repeatability, and it’s going to continue to work 20 hours a day. It easily handles the largest formed part, which weighs about 180 lbs.”

Acieta’s experience with robot integration on press brakes was key.

Hauser notes, “We have welding robots, and I’ve learned that the support from the integrator is crucial to success.”

To manage the project, Chicago Metal Fabricators hired a project engineer who was involved at every step of the process, from specifying the machine foundation to installing, training and operating the robotized bending cell.

A chief concern in bending a high volume of parts is maintaining repeatable accuracy. To that end, the company chose to have Acieta integrate a laser scanner to automatically check parts after they’re formed. The robot presents the finished part to the scanner, which measures dimensions in three critical spots.

“We can set it up to check every part or customize to whatever the sample selection needs to be,” Hauser says. “Quality and accuracy are a top priority because we want to run unattended and don’t want to run 500 parts that are out of tolerance.”

“The laser scanner can check a part in 15 sec. where manually it takes about 3 min.,” Hauser adds. “We inspect approximately 90 percent of all parts we run for this application.”

While the robotized bending cell runs largely unattended, it’s not “set it and forget it.” The staff monitors any variations or early warning signs that part dimensions may be moving via the digital laser scanning data from the sampling of parts. This gives the team an indication when an adjustment is needed.

A single control is used to operate both the press brake and robot. The robot is programmed offline using RoboWave, a CAM software supplied by Acieta. The software automatically establishes the sequence of moves the robot will make, from picking up the part to palletization. Modifications can be made to further optimize the process, but the software does most of the work.

With the bending cell, Hauser reports a 25 to 30 percent increase in productivity. The cell operates two shifts dedicated to producing four parts. Now, there is a predictability of volume per shift.

“Because we’re a custom fabricator, we have to justify an investment on one project, but the bending cell opens us up to quote on other projects and helps us be more competitive,” Hauser says.

He and his team are adding a light-gauge part family to the bending cell’s workload. This will require the robot to perform a tool change. Acieta has integrated lighter gauge tooling for the job, which will give Chicago Metal Fabricators the ability to use the cell to produce lighter gauge parts and more of the work handled at its Elk Grove Village location.

The bending cell uses inbound and outbound conveyors to optimize the production flow in the unit, but it also has a separate entrance where other parts can be loaded and unloaded from a pallet. This gives added flexibility to handle different jobs.

“We still have a fair amount of labor because we do a lot of heavy work, but to stay competitive, we must have automation,” Hauser says.

Adding the bending cell came with minimal issues thanks largely to a dedicated project engineer and the support of the equipment suppliers.

“It’s 60 percent about having the right people who understand the technology,” Hauser says. “The cell is what I expected. It’s been running well, and we’ve been very happy with it.”