Additive manufacturing (AM) is nothing new. In fact, it’s coming up on its 100th birthday. Sorry about that, Chuck Hull, Carl Deckard and all the other 3-D printing pioneers. In 1925, Westinghouse Electric employee Ralph Baker had the novel idea of using arc welding to manufacture parts bead by bead, building them up one layer at a time until complete. He didn’t call it such, but Baker had just invented wire arc additive manufacturing, or WAAM.

Mark Douglass, business development manager at The Lincoln Electric Co., will tell you the modern version is far more elegant. It’s also faster, more accurate and completely automatic. This last part is largely due to a strong relationship with ABB, which supplies the robots that hold the welding torches, driving them through their complex, multi-axis motions as they deposit tens, hundreds or even thousands of pounds of wire feedstock onto the build platform below.

Additive manufacturing experts like to lump WAAM and its counterpart laser hot-wire AM into the direct energy deposition bucket, but it’s an easy argument to make that this unique form of additive process deserves its own category. Douglass doesn’t care much about any of that, provided that customers keep bringing him and the Lincoln Electric team CAD files they can turn into large 3-D-printed metal parts.

“One of our first substantial commercial applications was the manufacture of aerospace tooling for composite parts – layup molds, in other words, made of Invar,” Douglass says. “Since then, we’ve expanded into various markets, including heavy equipment, chemical processing, power generation, and oil and gas, the latter of which includes upstream, midstream and downstream applications. In each instance, we can make a strong business case for additive. Not only are there no tooling costs, but we’re able to produce large parts much more quickly than traditional processes.” 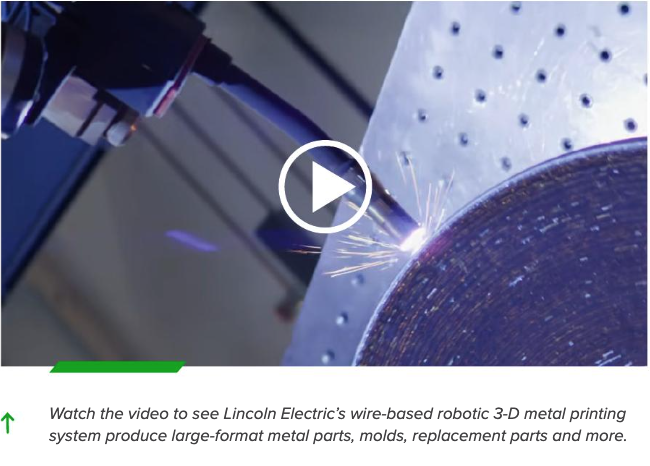 One example of this comes from a project with Chevron. Earlier this year, the refining giant approached Lincoln Electric for assistance with some emergency replacement parts for one of the company’s refinery hydrogen plants. Within 30 days of initial contact, Lincoln Electric delivered eight nickel-based alloy piping components, shaving nearly two months off the lead-time had they been made elsewhere. “It was a great showpiece for the power of wire-based 3-D metal printing solutions,” Douglass says.

Jason Flamm, engineering manager for additive solutions at Lincoln Electric, explains that the process works much like any other robotic welding application, but writ large. The company has 18 systems in place and is the largest known large-scale wire-based 3-D metal printing platform globally. Lincoln Electric also has a large wire manufacturing facility nearby to support its enormous feedstock demand and to produce non-commodity materials like the Invar and nickel-based alloys.

Each AM cell is equipped with a gas metal wire arc system, and there is a laser hot-wire cell available “for the more challenging alloys,” Flamm says, all equipped with a 6-axis ABB robot and a 2-axis positioner. Having this many axes at its disposal allows Lincoln Electric to do something that most wire-based 3-D metal printers cannot – deposit material in non-horizontal and non-planar layers, a capability that provides even greater flexibility to a manufacturing process known for its design freedom.

Once the customer sends their CAD file, an engineer “slices” it into the layers common to all 3-D printing processes using Lincoln Electric’s proprietary SculptPrint OS software, which subsequently programs the robot, positioner and deposition parameters. When asked why they don’t use ABB’s RobotStudio for this last step, Flamm’s answer was surprising.

“Even though there are some similarities between the technologies, additive is not like robotic welding,” he says. “In a typical arc welding program, the program might have a couple of hundred points, whereas with our process, we have tens of thousands – if not hundreds of thousands – lines of code that the system generates automatically based on the CAD model along with various process inputs. We did, however, use ABB’s RobotStudio extensively during the software and process development stage and continue to use it elsewhere. It offers robust capabilities that allow us to develop a high degree of integration between the different systems. It’s a very enabling platform.”

No matter the manner in which they are programmed, it’s not only the parts that are huge; so is the freedom to improve on their designs, which in some cases are many decades old. Douglass notes that once they’ve explained to the customer how WAAM works and that they can produce part geometries not possible with traditional processes such as casting and forging – and do so with no additional cost or manufacturing time – they can often leverage this to tweak the design for the better; sometimes, this happens on the fly.

“We were in the middle of a print job recently when a customer called us to say they’d just discovered that the centerline on a critical part feature was off by an inch,” Douglass says. “Because that section was yet to be built, we took their revised CAD model, resliced the component CAD model and then sent the program back out to the additive system, which then printed the feature in the correct location. That’s pretty neat.”

Lincoln Electric is taking similar advantage of this flexibility for their own maintenance operations. For instance, an engineer charged with repairing a machine at their factory decided to “open up” some areas in a replacement bearing housing. This made it much easier to apply the correct preload on the bearing, a problem that had plagued maintenance people there for decades. Had they used the cast replacement part as in years past, such an opportunity would have meant retooling and significant delay.

For those wondering how much one of Lincoln Electric’s WAAM cells costs and how soon they can get one, Douglass has some unwelcome news: they’re not for sale. Lincoln Electric’s business model since opening its Additive Solutions business in 2019 has been that of a service bureau. There are several reasons for this, chief among them that they’ve become very good at it and feel they can drive the market faster by offering WAAM on a contractual basis.

“To be blunt, the turnaround time on the Chevron project was quite fast because we know what we’re doing,” Douglass says. “That expertise, combined with the strength of being vertically integrated and owning the wire production, allowed us to quickly deliver thousands of pounds of nickel wire, which was key to delivery. So far, our approach is working really well. We have the world’s largest wire-based 3-D metal printing factory, and our goal is to expand and ultimately establish regional wire-based 3-D metal printing centers across the United States, and eventually, around the globe.”