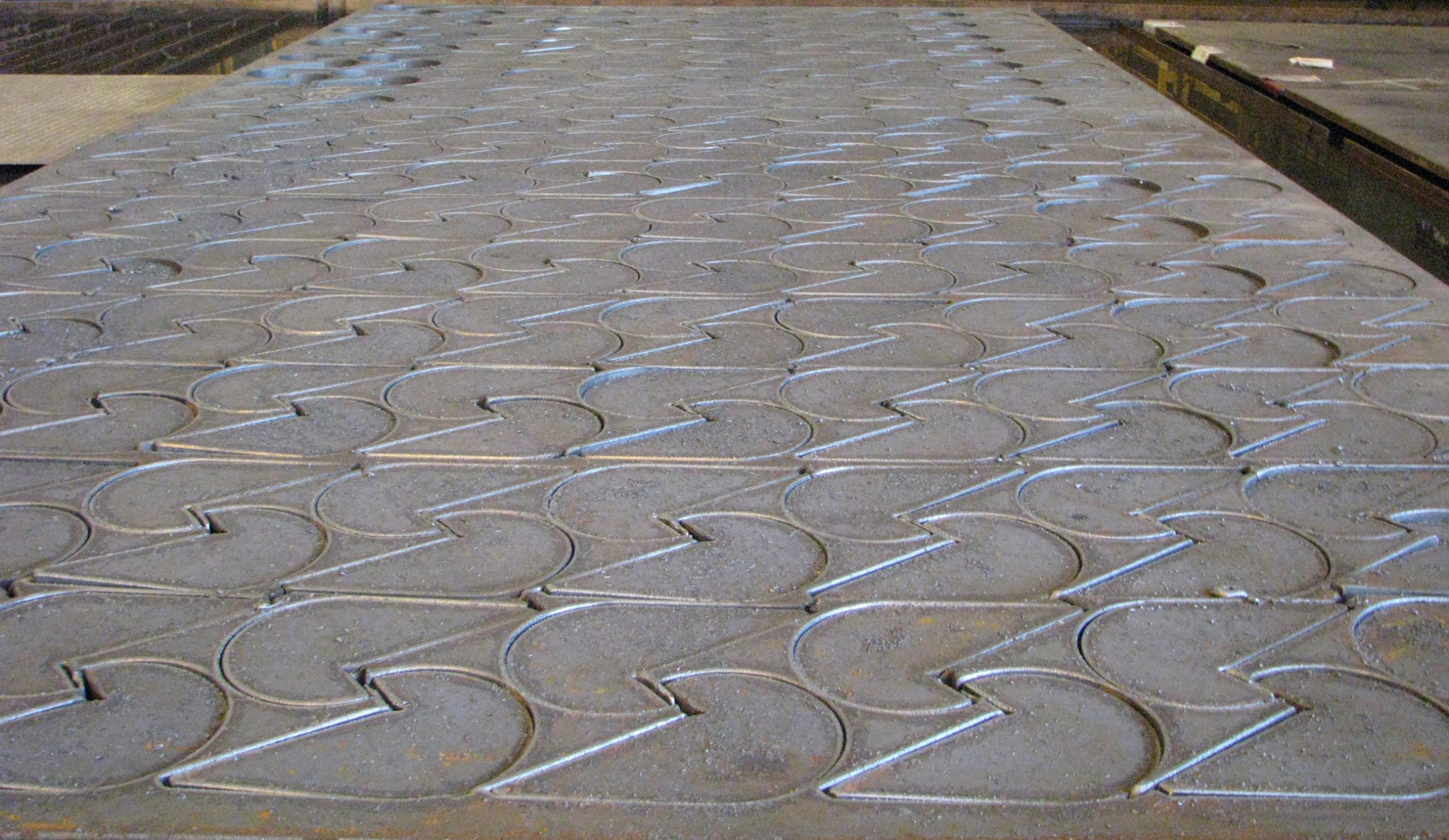 Freightliner Trucks, an American truck manufacturer under the Daimler Group umbrella of companies, produces heavy-duty semis – the type of long-haul carriers that ship goods from one side of the country to the other. To produce those trucks, the company employs a fleet of laser cutters. In the first year after upgrading the company’s CAM software, Daimler/Freightliner saved more than $1 million.

Similarly, Hi-Tec Profiles, a steel fabricator in Western Canada, also saved more than $1 million after upgrading the CAM software it uses in conjunction with its multiple laser cutters. For both manufacturers, the unprecedented savings were the direct result of switching to PEP Technology software.

To get the story behind the profits these and other companies are making by upgrading their CAM software, Bob Jencks, president of Measurement Masters Inc., the developer of the PEP Technology software, explains the power of new CAD/CAM systems as well as the value of upgrading.

SFL: How did PEP Technology software save Daimler/Freightliner and Hi-Tec Profiles more than $1 million annually?

Jencks: The short answer is time and technology. The longer answer requires a look at how the company creates its cutting nests. Because most nests look the same, it makes sense to first discuss how a PEP nest is created compared to the traditional method.

Most programmers can only spend, on average, up to 20 min. setting up each nested sheet, making it nearly impossible to complete the dozen-plus critical programming tasks required to produce a nest that can maximize material and cut fast. Not having the time to include them in a nest results in a less-than-ideal situation.

PEP software, on the other hand, handles all of those critical programming tasks automatically and can execute the entire nest within a minute. These PEP nests not only save programmers time by producing nests 10 to 40 percent faster, they also save on material – up to 20 percent in sheet savings can be realized based on the fact that all critical programming tasks are included every time.

For Freightliner, material and time savings represented 93 percent of the $1.5 million the company saved in year one, as seen in Figure 1. 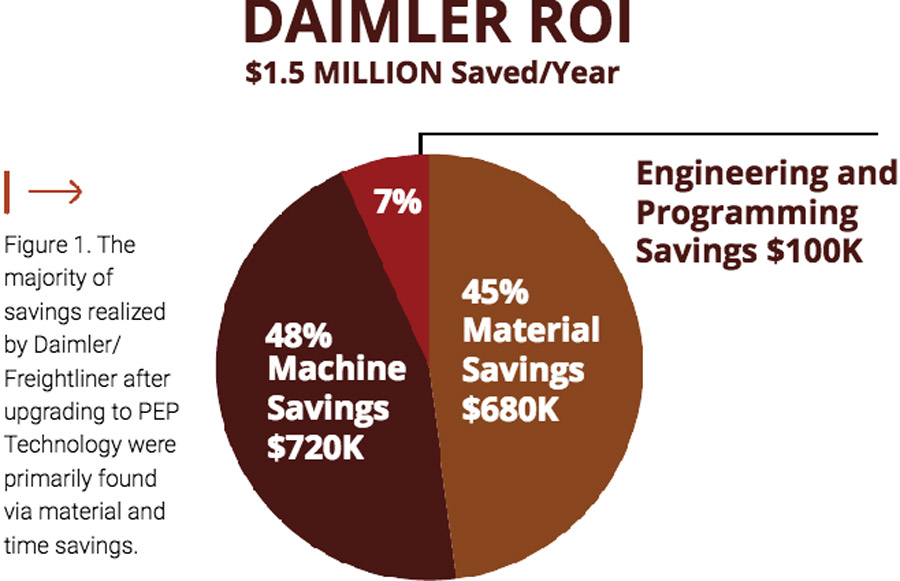 How does PEP save material over other CAM automatic nesting products?

Material yield is a function of a programmer’s time in regard to his chosen CAM software. As discussed previously, PEP creates great nests in one minute that seldom require editing of any kind.

When the PEP automatic nesting results are benchmarked against a skilled programmer with 20 min. to create nests, the PEP material savings is typically 6 percent. The percentage varies according to the amount of time the programmer spends setting parameters, re-nesting and editing the automatic results.

It should be noted that when a single programmer is responsible for converting customers’ CAD files, scaling and fixing the parts, verifying the CAD file to the converted part, and then nesting for two lasers, the PEP material savings are closer to 12 percent.

When the PEP automation is run against another CAM product’s fully automatic mode, the material savings is typically 12 to 20 percent. The savings vary according to the type of parts being nested.

It should be noted that Daimler/Freightliner and Hi-Tec Profiles both had five programmers prior to purchasing PEP to create nests for their lasers. In addition to the material and machine savings, both companies were able to do all the programming with a single PEP programmer.

“Common cutting,” which is the practice of nesting parts to share common edges, is totally automatic with PEP regardless of notches, radiused corners, tapers and part size. The software does the analysis and categorizing, the nesting of common cut parts at the kerf, the sequencing and the development of the common cut path – and it does all of it automatically.

In the common cutting example seen in Figure 2, parts are 210 in. long and have a 1/2 in. radius on all four corners. Prior to the upgrade, multiple CAM products were put to the test, but all of them failed to common cut those parts. The failures were, in part, due to the time constraints placed on programmers. It’s often too time consuming for the programmer to set parameters, create nests, edit the nests and set up the common cutting manually.

It’s important to mention that the type of common cutting we’re discussing isn’t the expected type – usually carried out only in situations with rectangular parts with sharp corners. Instead, the focus is on what PEP customers have come to expect: common cutting on a wide range of part sizes and geometry types.

The truth of the situation is that no one common cut path will work for all types and rotations of a part. Common cut scenarios are complex, which means the analysis and the solution need to be carried out by the software. Because we have been perfecting and automating different cutter paths for more than 25 years, the automation of the process allows PEP customers to common cut a variety of parts reliably in seconds. 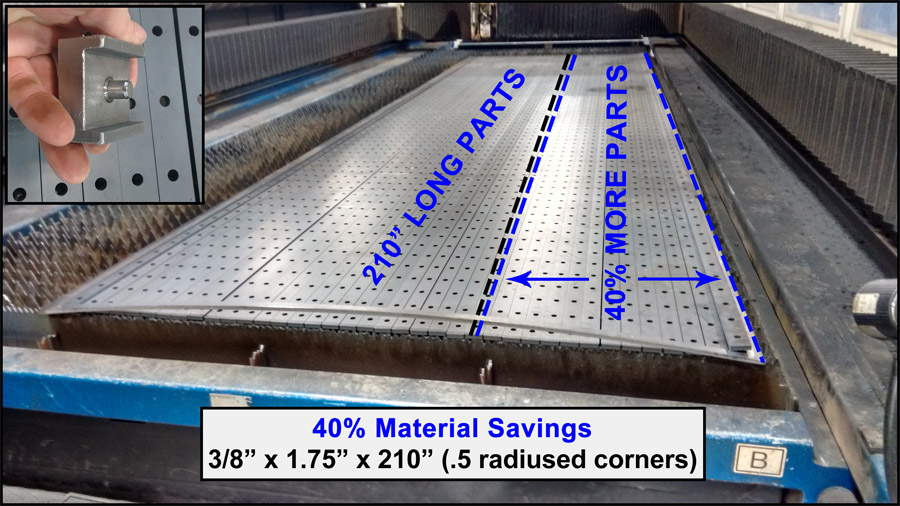 Figure 2. Prior to upgrading to PEP Technology, these 210-in.-long parts were unable to be common cut. The new software, however, had no issue nesting these large parts for common cutting.

Why is it so important to complete every programming task in regard to ROI?

More than a dozen critical CAM processes must be done 100 percent of the time. If the programmer is not doing all of them, then a laser runs 20 to 40 percent slower.

In addition to slow cutting, head crashes and poor cut quality are eliminated when all the critical programming tasks are completed 100 percent of the time. Therefore, when beam on-time goes up and the laser is cutting faster, 20 to 30 percent increases in laser throughput can be realized.

These critical programming tasks are also essential when it comes to quoting. Quoting the job one way and then cutting it another makes no sense and makes it hard to compute whether a profit is made. To be accurate, the quote has to reflect the way that the parts will eventually be cut or the profit margins will be off.

Can you provide an example or two of how PEP increases cutting speed and material savings?

The first example that comes to mind is a case where a customer was looking to justify the cost of three new fiber lasers by taking a close look at their costs of manufacturing. After examining the benefits that could come with PEP software, it was discovered that the company could get as much as a 19.6 percent increase in material savings and a 50 percent speed-up in feed rate – from 800 ipm to 1,300 ipm. The company was looking for a material yield of 90 percent and nests that were created automatically.

Initial nesting tests included cutting 65 of the customer’s parts – with one part nested per sheet. The PEP code processed 0.070-in.-thick sheets of production parts at 1,300 ipm. The competitive software could only cut the parts at 800 ipm using the same tech tables. In this situation, no common cutting was involved.

Another example is based on quoting speeds in addition to time and material savings. A customer realized he needed to quote faster and more accurately to win more jobs. During a training class, the customer noticed similarities between an example that was provided and one that his company had spent 19 hours quoting and had lost. The job, which included 51 parts, five materials and 167 parts nested, only took PEP one hour to quote.

There are many differences between programming for CO2 versus a fiber laser, yet it makes no difference to the PEP software. A PEP customer simply selects the machine type, and the software does the rest – generating the appropriate nest.

One of many advantages to the fiber laser is the ability to cut faster. Faster cutting however, requires slicing up skeletons and cutouts enable safer cutting and easier part removal. PEP has two special routines called Destruct cutting and Scan cutting to take advantage of the fiber faster cutting capabilities.

Scan cutting is used for cutting grids of circles, rectangles and other shapes. Scan cutting develops a cutter path that cuts individual geometry using pierce and cut technology; this eliminates the de-acceleration and pausing in corners.