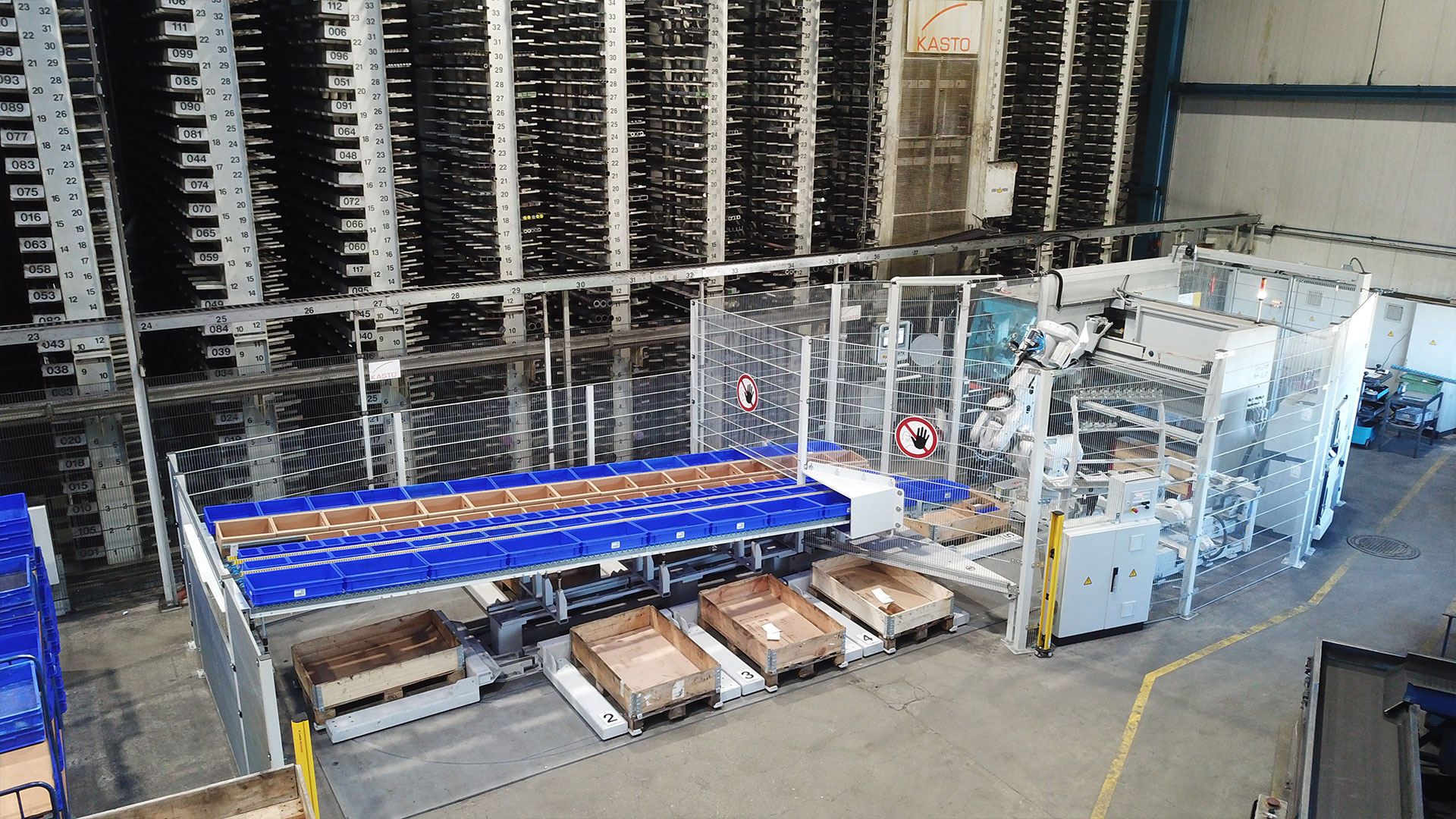 Robotics have entered practically every aspect of manufacturing. From welding to material handling, large-scale robots and small collaborative robots bring efficiencies to the shop floor. Recently, a steel distribution company, EHG, upgraded to a sawing cell with robotic material handling technology and the results are impressive.

Based in Austria, EHG was founded in 1963 near the German and Swiss border town of Dornbirn. The company has built a reputation for developing into an international active, independent, full-service supplier for skilled crafts, industry, business and trade.

Proving that it is more than just a steel distributor and supplier, EHG is known for its solutions as a systems provider and an expert partner. With total stock of around 49,000 tons, the range of goods includes more than 15,000 items in more than 140 grades and countless dimensions of steel and metal.

Christian Rüf, head of logistics systems and processes at EHG, says the company has one of the best-stocked warehouses in central Europe.

“This ensures a high degree of availability and short delivery times,” he says.

Providing a variety of services is as important to EHG as the large warehouse assortment. Rüf says the company doesn’t think in terms of solutions rather than just in terms of products.

“This means we supply our customers with the items they need directly for production, which are already cut to size and just in time,” he says.

Keeping up with the demands of its customers throughout Europe, EHG has implemented some of the latest automated technologies from Kasto, a German-based manufacturer of saws and material handling solutions.

Stefan Dolipski, vice president at Kasto, says the company began utilizing robots in sawing applications in the early 2000s. In 2008, Kasto installed its first robotic cell in the United States at a steel service center in Kansas City, Mo.

The robotic sorting and handling solutions from Kasto are part of a product line called Kastosort. Engineers worked on programming and the development of end-of arm-tooling (EOAT) grippers for various applications in Kastosort, making sawing cells completely automated.

While bringing in robotic technology to create a fully automated sawing solution brings a variety of perks, the challenge some users face when integrating a robot is the “data exchange between the systems,” Dolipski says, adding that many companies work with scenarios where there are multiple job information entries to account for.

“We try to make this as simplified as possible,” he says. “The saw controller already has all the information regarding geometry, dimension and weight. We hand this information over internally without the operators having to do anything. This allows for a very simplified process to get the data exchanged and orders started.”

When companies like EHG integrate the Kastosort system, they have access to programmed intelligence, which selects the proper EOAT device and stacking sequence for storage boxes, providing the most efficient stacking method. Dolipski says that for steel service centers where there are more challenges with organizing and sorting than what is experienced in manufacturing facilities, Kasto designs and selects a variety of grippers, magnets and suction cups to cover all possible sizes, types and lengths of material.

“Adjustments to what materials and dimensions get cut sometimes requires a change of the available devices,” Dolipski says. “Kastosort is developed and delivered so it is not complicated to add additional EOAT devices when needed.”

At EHG, the robot is connected to the saw, which automatically removes the finished cut parts from the working area of the machine using various grippers. The material is deburred by the robot and sorted according to the order. The parts are placed in various sizes of cardboard and plastic boxes that are also automatically supplied to the process.

While the saw is cutting the sections and the material is offloaded and stacked, a shipping label is created by a printer. The robot is also capable of placing the label on the corresponding boxes. Pallet trucks or forklifts can then transport the pallets of finished materials to the shipping department.

“Kasto has developed an outstanding solution for us,” Rüf says. “It is a container carousel with eight pallet spaces on which the robot can independently place and fill the respective boxes.”

Watch this video to see how a robot in a sawing cell does everything from material handling tasks to deburring parts.

Weighing in as important factors to EHG’s business model includes trouble-free processing and logistics processes that are efficient. Rüf says they process about 620,000 order items per year, primarily in small batches of less than 10 items. This puts the company under an “enormous” time crunch and, in some cases, with only one to two hours to complete an order.

EHG’s Dornbirn site has highly advanced storage and processing technology, including eight automatic high bay storage systems, 40 automatic bandsaw and circular saw machines, 27 of which are Kasto automatic saws, and two independent sawing centers, making the company one of the most modern of its kind in Europe.

“We installed four UniCompact honeycomb storage systems just for storing bars, tubes and profiles, as well as another system for storing sheet metal,” Rüf says. “The Kasto automatic saws range from compact and flexible production circular saws to heavy-duty block and plate bandsaws. We have the ideal machine for any materials and dimensions.”

EHG is fully satisfied with its new Kasto systems. Rüf says the integration of the individual machines into a continuous system is unique.

“Of course,” he says, “it provides us with the advantage of having only one contact person to take care of all of our questions and concerns.”

Troubleshooting is also a breeze, as the experts from Kasto can connect to the system through remote maintenance technology and provide assistance that helps to avoid downtime.

“The sawing cells are extremely reliable and easy to operate,” Rüf notes. “They are a true asset to our company, enabling us to complete our work faster, better and more efficiently.”