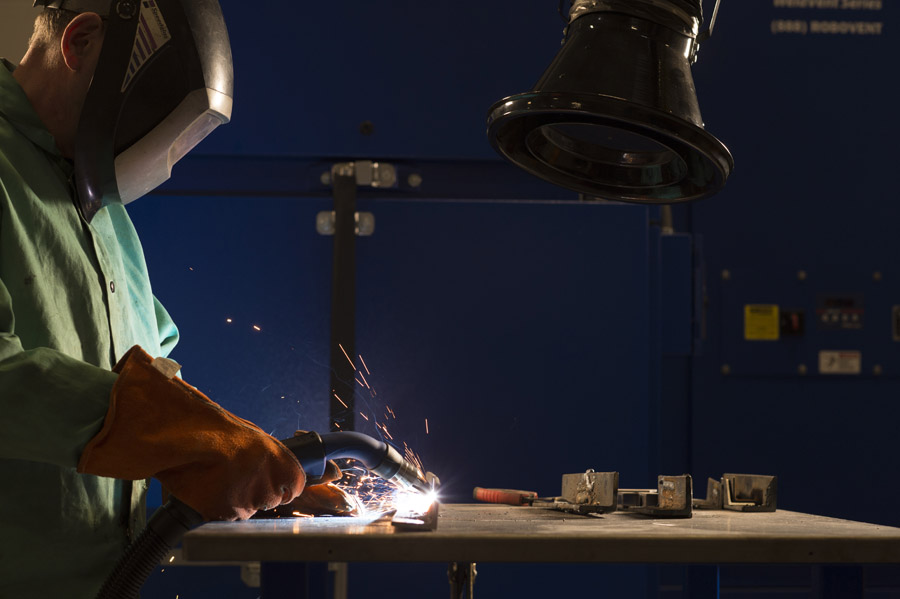 Fume guns have been around for decades, but they haven’t always had the best reputation. Fortunately, reputations can change for the better. So, if you’re engaged in manual welding, now may be a good time to give them another chance.

Many welders avoid fume guns because they fear they will be heavy and bulky, leading to excess welder fatigue and reduced visibility of the weld seam. Welders may also have concerns about weld quality when using a fume gun.

While these perceptions may have been true of earlier generations of fume guns, advances in technology have significantly reduced or eliminated many of the drawbacks. In fact, manual welders may find that the fume gun is the weld fume control option they have been looking for.

Fume guns have weld fume extraction built right into the weld torch so fumes are collected at the source as they’re created. To accomplish this, the gun is equipped with an extraction tube that runs alongside the shielding gas tube inside the weld torch handle and hose. The nozzle is designed to provide maximum extraction of fumes without interfering with the flow of shielding gas.

Weld fumes are pulled through the extraction tube and into a dust collector where the air is filtered and particulates are collected in a containment bin or drum. A high-efficiency fume gun can collect 90 to 95 percent of weld fumes, keeping them out of the welder’s breathing zone.

Because fume guns are collecting weld fumes so close to the source, they do not require much in the way of airflow (measured in cubic ft. per min., or cfm). However, they do require a dust collector powerful enough to overcome the high static pressures involved in pulling air through such a small diameter tube.

For this reason, fume guns are paired with a high-vacuum (hi-vac) dust collector to provide sufficient extraction power. Several guns can be connected to a large centralized collector, or manufacturers may opt for a small portable dust collector that can manage extraction for one or two welders.

Fume guns are used for manual MIG welding applications. While they can be used for welding all kinds of parts and components, they are especially valuable in situations where other types of weld fume source capture fall short. Examples include when working with large weldments or in other situations that require a high degree of welder mobility, or working in tight or enclosed spaces, such as inside the hull of a ship.

Large weldments are often problematic for weld fume collection. Fume arms are only effective when they are positioned directly over the weld seam. Welders working on long seams don’t want to be slowed down by continually repositioning a fume arm as they move. And in the case of very large components, such as ship hulls or large turbines, it may not even be possible; the fume arm won’t have the reach or flexibility to follow the welder as he moves.

Ambient fume collection, through exhaust and makeup air systems or ambient filtration solutions, is often used in environments where weld fume source capture is difficult. But ambient systems have their own drawbacks.

They do not prevent weld fumes from entering the welder’s breathing zone while they are working. In addition, because they are collecting and filtering air for the whole facility, they require higher cfm and use more energy than source capture options.

When using a fume gun, extraction is always right where it’s needed. The gun collects fumes before they enter the welder’s breathing zone. Welders do not have to worry about repositioning fume arms or other equipment as they work; they can simply go about welding as usual.

In addition to flexibility and mobility, fume guns offer a number of other advantages.

When to avoid them

Fume guns are an excellent choice for MIG welding applications, but there are situations where they are not effective. They only provide weld fume extraction in the immediate vicinity of the weld tip.

Weld fumes that rise off of the weld seam after the welder has moved on will escape into the ambient air. This makes fume guns less appropriate for working with coated metals or metal contaminated with lubricants that continue to smoke long after the weld seam is complete or for other applications that result in extended smoking.

Fume guns may also not be optimal in situations where the welder’s torch is in an unusual position, such as upside down. The fume gun position impacts collection efficiency. In some positions, the fume gun may not have enough capture efficiency to keep weld fumes out of the breathing zone.

Several considerations should be kept in mind when selecting a fume gun.

Another consideration in selection is whether you want an air-cooled or water-cooled model. The choice depends on your application and the type and thickness of material you are welding.

Air-cooled fume guns are more portable than water-cooled systems and less expensive to buy and operate. Air-cooled torches are available with ratings from 150 to 300 amps with continuous duty cycle. They are usually heavier than water-cooled torches with the same amperage rating. They are best for low-amperage applications with shorter duty cycles.

Water-cooled torches have greater cooling efficiency, so they can be smaller and lighter for the same amperage. However, these systems are more expensive to buy and operate. Water-cooled systems are available with ratings from 300 to 600 amps with continuous duty cycle. They are best for high-amperage applications.

Finally, you need to decide what kind of hi-vac dust collector you want to hook your fume guns up to. If you have a large number of welders that do not require a high degree of mobility – for example, welders working side-by-side on benches or in booths – a large central dust collector may provide the highest efficiency. For individuals or small teams of welders, or environments where welders are very mobile, smaller portable units like the RoboVent ProCube may be a better choice.

Using a fume gun is, for the most part, just like using any other weld torch. Welders should not have to think about weld fume extraction while using the gun. However, there are a few things to know about setting up and optimizing your system.

Before using your fume gun, make sure extraction power (cfm) and shielding gas flow rates are properly balanced. If fume extraction is set too high, it sucks in the shielding gas along with the weld fumes, resulting in poor weld seam quality.

Make sure you know how to control the cfm for your dust collector, which can usually be controlled for ducted collection systems using a valve system. For smaller portable collectors, cfm is usually controlled by directly adjusting the motor speed. The RoboVent Extractor has a sensor system that tells operators when suction power is in the correct range. This usually only has to be done the first time you set up the system.

Once the system is balanced, you can start welding. You should notice a sharp reduction in weld fumes rising around the weld torch. You may even be able to see the fumes enter the extraction nozzle. Take care of your fume gun nozzle and consumables just as you would with any other weld torch.

If you haven’t tried a fume gun lately, you may be surprised to see how far the technology has come. These modern, streamlined devices put high-efficiency fume extraction right in the palm of your hand.