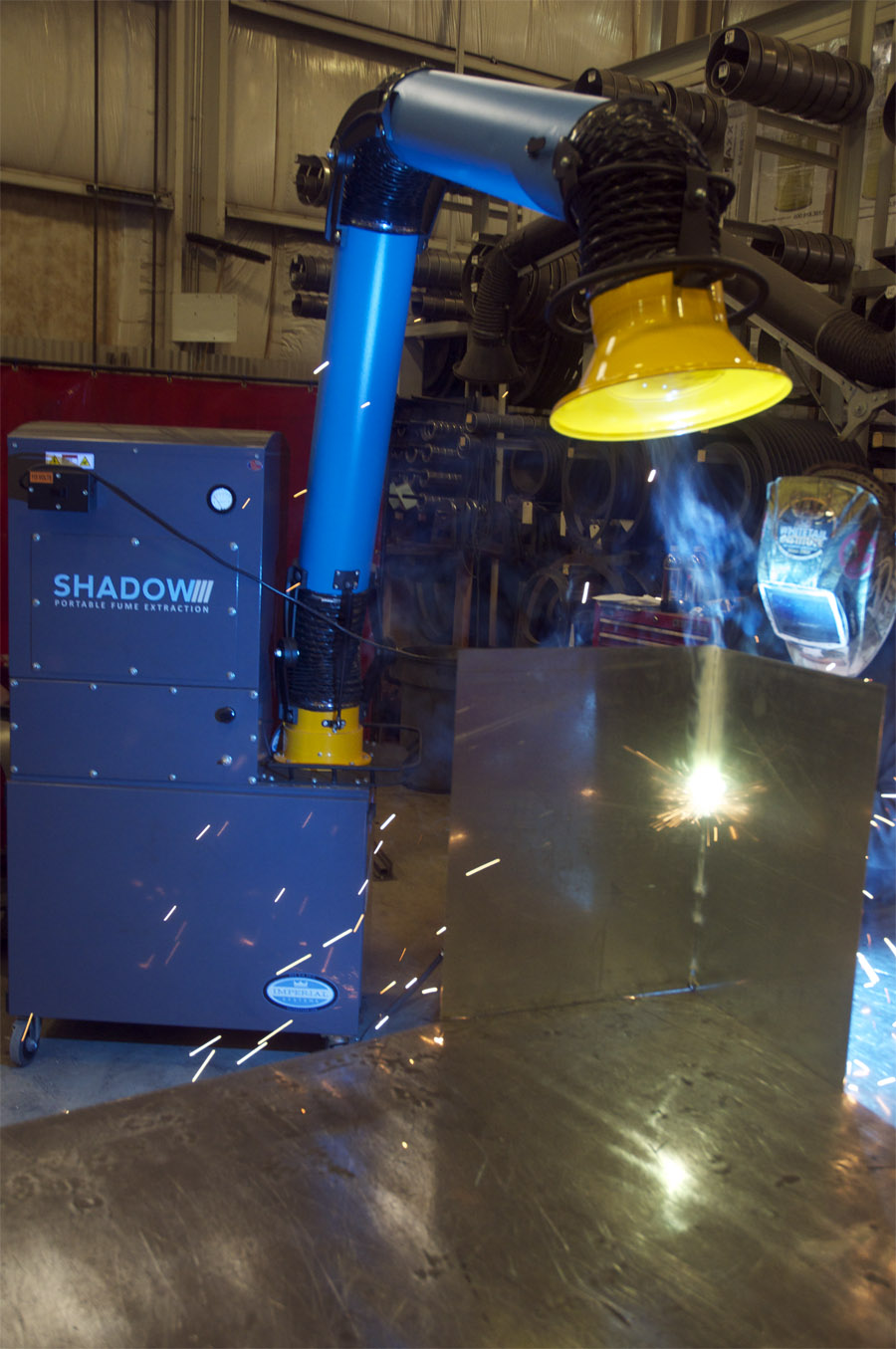 They’re a familiar sight in many welding and metalworking shops: fume arms hanging over the work area, pulling fumes away from the welder’s breathing area. That plume of smoke rising from the welding is full of very small metal particles that can do a lot of damage. Welders are especially at risk because they’re usually very close to the workpieces, right in the middle of the fumes.

Fume arms (also called fume extraction arms) are a solution many businesses use to keep welders safe. But how do you know if you need a fume arm for your application? Should you attach it to the ductwork or directly to a fume collector? How do you choose a length, diameter and fan size? Hopefully, this article can answer some of those questions for you.

Some facilities have an ambient system that cleans the air in the entire space. However, this isn’t the best solution for welders, who need a solution that removes the fumes at the source. This is often called source-capture fume extraction.

If you look at your workplace and there’s a haze of smoke and fumes around the welders’ areas, fume arms may be needed. Catching and removing fumes right where they’re generated means they never get out into the rest of the work area, and they’re removed from the welder’s breathing space.

Many metals involved in welding can be dangerous when inhaled as a fume, including manganese, zinc, beryllium and hexavalent chromium (a byproduct of heating steel that contains chrome as an alloy). Even iron particles can build up in the lungs and cause chronic disease.

The need for a fume arm can be determined by the amount of dangerous fumes in the air around the welder. OSHA sets permissible exposure limits for most chemicals. Even if the air in the workspace meets the standards, the air directly around the welder might not. If this is the air you need to clean, a fume arm is a good solution. A fume arm that’s the right size and working properly should keep welders safe from over-exposure to fumes.

Fume arms need a source of air to move the fumes. This is usually provided by fans. Sometimes it may be a small fan that powers one or a few fume arms, or there may be a larger fan creating airflow through a system of ductwork to several fume collection points.

For small welding operations or for places where the arms might be needed in different areas around the shop, the arms are often attached to a portable fume collector. These come in many sizes, and typically have some type of filtration system and support one or two arms, depending on the size of the fan.

Some locations have a system with a larger fume collector with a more powerful fan. These often have ductwork that runs through the work area, with fume arms attached where they are needed. Again, the size of the fan as well as the size of the ductwork determine how many arms the system can handle.

Fume arms may be mounted directly onto a portable or small fume collector. If they are part of a larger system, they may be mounted to the wall or to another support. If there’s no wall to mount an arm on, a support can be placed into the floor to attach it to.

Fume arms can also be mounted to the ceiling or an overhead rail. Large arms made to be moved around are mounted this way. In larger facilities, the fume arms may be on a rail system so they can slide to where they’re needed. This is more often used in bigger workplaces as these arms require a lot of room to be able to cover a large area. For a smaller workplace,  arms usually need to be small enough to be kept out of the way when not in use.

It’s important that the fume arm be positioned so that it’s working correctly. Most farms can be moved around and adjusted to put them as close to the source of the fumes as possible. The ideal position is directly over or beside the source of the fumes, but out of the welder’s way so it doesn’t interrupt the work.

The fume arm needs to be mounted so that it’s easy to position over the welding area, but also flexible enough to be moved out of the way. Most arms are flexible and can be moved up and down. On many arms, the direction of the hood can also be adjusted so it’s pointed at the source of the fumes.

Because of the many different types of welding work, a variety of fume arms are available. Besides where and how they’re mounted, the main differences include the length and diameter of the arm, the hood and how many joints the arm has (which determines how many ways it can be moved).

The weight and length of the arm often determines how it’s mounted. For example, a small fume collector may not be able to support a long, heavy fume arm without tipping over. On the other hand, a large overhead system may be designed to support very long arms that can cover a lot of distance – up to 30 ft.

The diameter of the fume arm is also important because a narrower diameter has more air resistance. Typically, smaller diameters are used at a lower CFM (cubic feet per minute) of airflow. For arms attached to a small collector, the CFM is determined by the fan size.

The same fan may be able to support one 6-in. arm or two 4-in. arms. For arms attached to a larger system, each fume arm draws on the airflow of the system, and the system needs to have enough CFM to provide enough airflow for the arms. This can get very complicated with a big system. Without enough CFM of airflow, fumes won’t be removed effectively. To keep from wasting airflow, fume arms often have a damper to shut off when they’re not in use.

The arm diameter is often between 4 in. and 8 in., although it can be much larger. Larger is not always better as a small-diameter arm will be lighter and will have more fume capture power, but in a smaller space. A larger diameter will be heavier and will capture fumes over a larger area, but you may only need a small area of fume capture.

The size of the hood varies among fume arms. A larger hood can cover a bigger area, but it can also get in the way when people are trying to work.

Another difference between fume arms is whether the joint components are on the inside or the outside of the arm. Joint components inside the arm can interfere with the airflow. Some types of arms attached to larger systems may not have these joints at all.

A small fume arm on a portable collector might have one joint that allows it to move up and down. A larger one might have two joints, one to move it up and down and another to move it sideways out of the work area. Computer-controlled fume arms that work with robotic welders might have more.

Fume arms are a key safety feature for welders because they are exposed to harmful metal fumes while working. The type of fume arm depends on the size of the operation, where and how you plan to use them, and what type of fume collection system you’re using.

No matter the type of fume arm, the best option is the one that provides the best air quality for welders and is easy for them to use. For help, contact a manufacturer who has experience with fume arms and dust and fume collection systems. They can help you determine how to incorporate fume arms into your workplace.