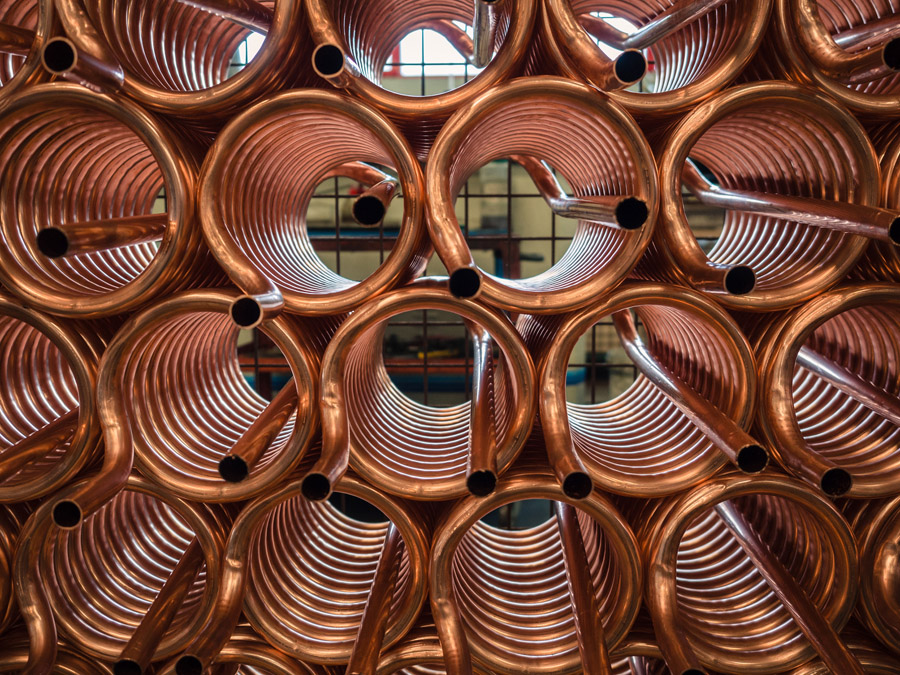 Engines get hot. So do air compressors, hydraulic power units, food and chemical processing equipment, power generation systems and virtually every other piece of machinery. Without a way to keep the gases or fluids flowing through them at the correct operating temperature, these mechanical devices will quickly fail.

If you’ve ever peeked under the hood of the family car, you already know one way to keep an engine cool. Most people call it a radiator, and it’s just one example of the many different styles and sizes of heat exchangers used in electromechanical equipment everywhere to dispose of excess heat.

Heat exchangers are complex devices, having hundreds, sometimes thousands of components, a substantial percentage of which must be welded together. It’s a process that’s not only labor intensive, but when done improperly can lead to leakage and downtime.

That’s why one heat exchanger manufacturer that does not wish to be named has long relied on skilled welders to build its products. There’s just one problem – as many in the manufacturing industry can attest to, good welding people are increasingly difficult to come by. Enter robotic welders.

The company acquired its first one in 1996, an ABB 2400L they picked up used. Since then, the robot logged 98,000 hours. At the time of its decommissioning late last year, it was still plugging away, but management decided it was time to retire the 22-year-old machine in favor of newer technology.

When the company first purchased the robot, the goal was to reduce welding costs, and the robot accomplished that job admirably. But somewhere along the way, those responsible for sales, production and quality came to realize that robotic welding brings much more to the table than faster throughput.

“We were able to reduce the weld times on our high-production parts to less than half of what is possible with a human,” says the manager of manufacturing engineering. “That’s one of the main reasons why we continued to invest in automation and why we are now looking to expand its use to many of our other manufacturing plants.”

Today, the company has five ABB welding robots, but as its engineering manager notes, that’s about to change as the company executes on its plan to automate on a global basis. This includes installing robotic welding cells in overseas facilities as well as several factories in North America.

“The goal, really, is to be able to decrease the time between taking a sales order to delivery of the product,” he explains. “By increasing the amount of welding that’s done robotically to say 70 percent, we anticipate that it will dramatically shorten lead times and have a positive impact on company growth.”

Another benefit is consistency, something that trickles down to other parts of the business in often unexpected ways. For example, robotic welding increases the first-pass yield during leak testing, which means there’s less time wasted on finding, marking and repairing welds. It also means fewer disruptions to the production floor, which in turn leads to more predictable deliveries, lower costs and, ultimately, greater customer satisfaction.

These are all happy outcomes, but when you consider the reality facing the industry – namely, fewer skilled welders – the ability to produce high-quality welds consistently and quickly with automation becomes even more important going forward, especially where doing so improves other aspects of the production process.

Welcome to the beta site

The company’s automation programmer will be part of the team responsible for the robotic welding rollout. He agrees with the engineering manager about the benefits of robotic welding, but points to another indirect benefit of automation: setup time.

“The ability to program offline using ABB’s RobotStudio has taken 24 to 40 hours of production floor teach time down to maybe six to eight hours for the entire job,” the programmer says. “I import the part’s CAD model, place it in a simulated welding cell, program the robot, then tweak it on the floor. It’s greatly reduced the amount of disruption down there, and as a result, they have more time available to make parts.”

Looked at from a global perspective, a common software platform eliminates the need for each plant to reinvent its own wheel. All the programmers can export proven processes to anywhere in the world, secure in the knowledge that everyone is using the same welders, the same fixtures and the same programs.

“A common cell design will also allow us to flex our capacity between sites,” he adds. “If we get pinched at one facility, we can lean on one of the others to help out. We can just send them the program. The product is going to look and perform the same, and the customer won’t have to wait. It’s a win-win for everyone.”

“We have no intention of reducing our workforce,” the manager of manufacturing engineering notes. “With the shortage of skilled labor, companies have two choices – automate and grow or stay stagnant. We’re taking the path of growth, something that’s good for our workers and customers alike.”

And no matter how good the robot, the welder or the software, there will always be a need for humans.

“The idea behind this global initiative is to get these first cells implemented, prove that we will see a return on investment, then start deploying at other sites,” he says. “That said, we’re not putting them everywhere. We have a number of facilities making heat exchangers where this model doesn’t apply.”

One example of this is on short-run or custom work. Where robotically welding a production run of 100 to 150 heat exchangers per day is a no-brainer, onesie-twosie orders and difficult jobs will remain firmly in the capable hands of skilled welding personnel. That said, once a job is programmed and run on time, busting out a dozen parts for a special order is no big deal.

Interested in automating aspects of your welding department? One key to success is development of your own in-house programming capability. This eliminates the need to rely on the equipment supplier, reducing costs while increasing flexibility to meet changing customer demands.

“It’s also important to develop what I call a ‘robotic eye,’” says Mark Oxlade, systems engineer at ABB Robotics. “That means you’ve gained the experience to know what work is best for the robot, how it should be fixtured and where you’re going to run into problems. You can’t acquire that knowledge unless you’re in complete control of the process.”

The engineering manager agrees. “It’s true in general for all manufacturing, but with robotics especially, you have to keep learning. You need to continually think outside of the box, looking for new improvement opportunities, new ways of doing things – pick the vendor’s brain, go to trade shows and talk to other shops. Do it right and you’re looking at 90 percent uptime on some jobs with far more predictable production besides. You just have to get in there and do it.”