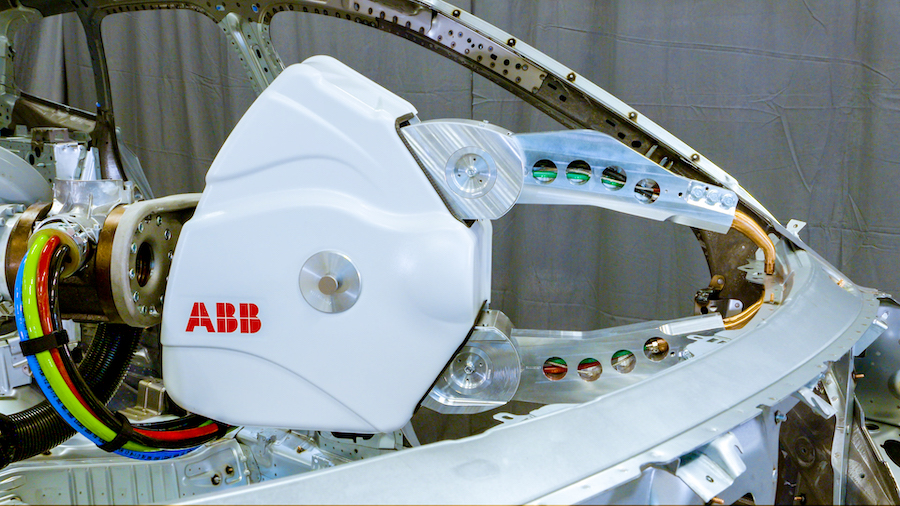 Due to its extensive use in automotive manufacturing, robotic spot welding is one of the most frequently leveraged forms of automated welding in the world. Because of its successful use in the automotive industry, the process is continuously being optimized, improved and, therefore, adopted for use in applications far beyond the production of automobiles.

Over the years, robotic spot welding has become quite common in high-volume, low-mix industries. Examples can be seen in the manufacture of electrical junction boxes, steel cabinets and a variety of white goods. It’s also prevalent in heavy equipment manufacturing, such as the production of construction and mining vehicles that have a cab, including backhoes and excavators.

In 1979, ABB introduced its first robotic spot welder, the IRB 60, with automotive customers in mind. The first iteration was effective, but over the 40 years that have followed, the customer base for automated spot welding has expanded, leading ABB to further optimize and increase its offerings.

Today, ABB’s IRB 6700 reflects the growing needs of customers, including the increasing desire for Industry 4.0 solutions. But whether the chosen brand is ABB or any of the other robotic equipment manufacturers on the market, customers should consider single-source procurement. In doing so, they can expect rapid deployment and consistent, long-term use.

Across the spectrum, industrial welding robots have become easier to install, program and maintain, and the IRB 6700 is exemplary of those advancements. In terms of installment, ABB has sped up the process through the development of a virtual simulation program that’s available to customers through the company’s RobotStudio software.

Typically, RobotStudio is leveraged for offline programming, giving users a virtual copy of the robot’s controller on a PC computer. Not only can orders be programmed without disrupting regular operations, it also makes training and process optimization easier. When it comes to the robot’s initial installation, however, RobotStudio becomes even more powerful with add-ons, such as ABB’s simulation program.

Whether it’s the customer or an integrator that’s designing or upgrading the manufacturing cell, ABB’s simulation package can recommend optimal setups while also flagging ones that might be problematic, which ultimately reduces the time required for the actual installation.

The simulation package is also beneficial even when only installing ancillary components, such as a new weld gun. If the customer is working with pre-existing ABB robots, the process is essentially plug and play. Overall, when a customer employs a one-stop-shopping strategy, installations are quick and simple as are any future troubleshooting activities.

“If the customer buys everything separately – mixing and matching robots and accessories – the line builder will need to spend extra time marrying the various components to put the full line together,” explains Hans Hjertsson, ABB’s principal engineer. “When you procure everything from a single source, the robot, gun and controller can all be fully integrated before they’re ever shipped to the customer or line builder. And then, if something goes wrong, you don’t have a lot of finger pointing.”

ABB’s GWT X9 servo spot weld gun, for example, is pre-set for ABB robots, meaning the gun arrives with a specific file already set up with all of the pertinent parameters. The gun, which is the ninth generation of spot weld guns from ABB and part of the company’s body-in-white portfolio, is modular, flexible, adaptable and easy to integrate.

“You can basically shoot sparks within an hour after you connect it,” Hjertsson says. 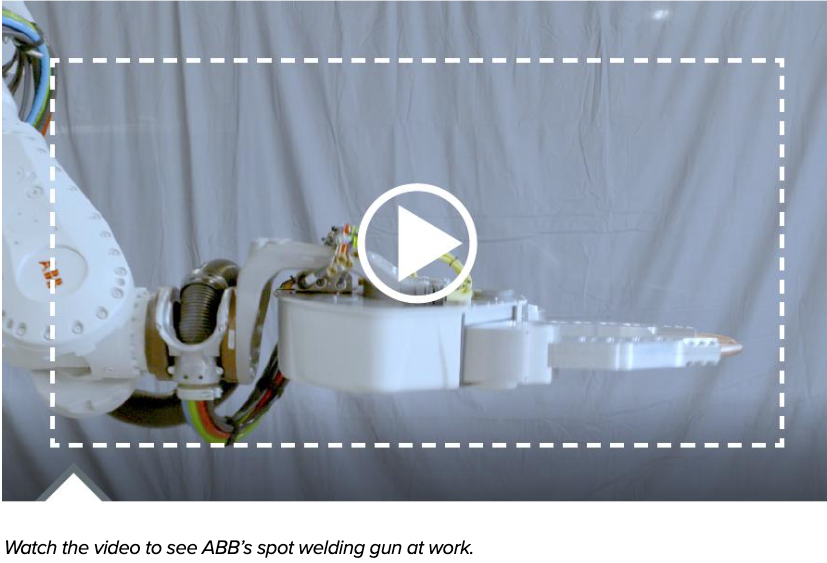 In terms of cabling, which is sometimes referred to as “dress,” ABB engineers focused on durability when the company released its new LeanID, which was on display at Fabtech 2019 on the IRB 6700. LeanID is an integrated dress solution that is designed to maximize flexibility and overall product longevity.

“Conventional dress rides on the outside of the robot arm, which makes the cables prone to wear and damage,” Hjertsson says. “The cables are often the first thing to fail because they’re constantly twisting and bending or pulling so tight that they snap. And, when they’re not housed, they can easily get caught on things. Because LeanID is designed as a housing along the robot arm, the dress is protected and better controlled. It doesn’t just flop in the breeze, so to speak, while the robot is doing its job. By developing the LeanID, we’ve taken the point of failure and minimized it.

ABB recognized the benefits that come from housing the robot’s cabling within the LeanID package, but product longevity is also closely tied to the IRB 6700’s connectivity. In the era of Industry 4.0 and predictive maintenance, OEMs like ABB are giving customers the ability to collect data from their robots and communicate it back for analysis to keep equipment up and running longer.

When it comes to equipment uptime and process optimization, connectivity is a must. In that regard, ABB’s RobotStudio software serves as the connection between floor operations and the front office – made possible by connectivity that the company embedded right at the controller.

“The Irc5 robot controller enables customers to securely integrate and aggregate their data to combine it with wider industry data and predictive analytics,” says Doug Hixon, ABB applications manager in the company’s robotics and automation division. “This gives them the ability to generate insights that can help with performance and productivity improvements. The data can also be used by service experts to address issues that could lead to costly unplanned stoppages before they occur.” 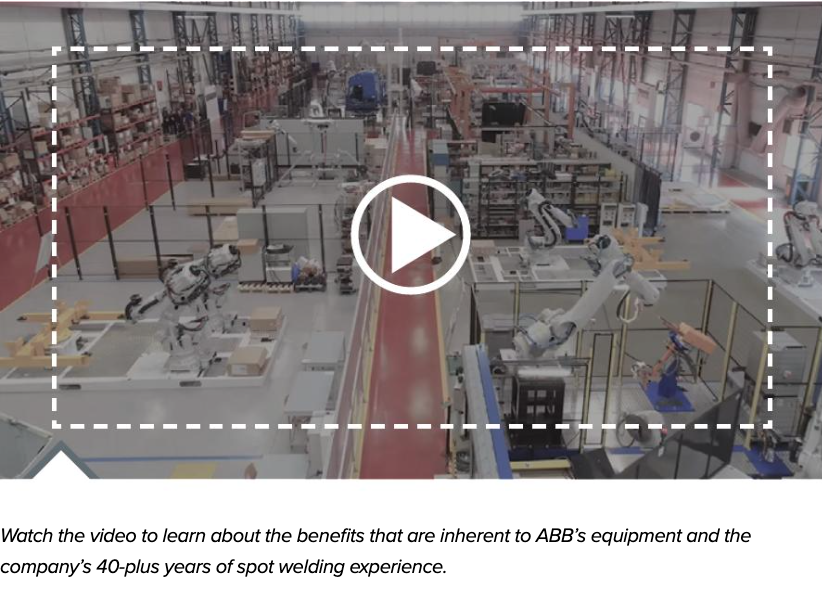 Overall, the efficiencies that ABB has baked into its products net down to rapid deployment and performance enhancements long after installation, such as the consistency and quality of welds.

“If we contemplate the service as well as the performance side of a manufacturing operation, it’s easy to see how uptime and throughput can increase by collecting and analyzing machine data,” Hixon says. “For example, because the gear box’s load and percentage are constantly being monitored, a customer can see if the robot is overloaded; they can gather and analyze data on a per-axis basis. By analyzing a robot while in production, customers are alerted when it’s overloaded or being misused in any way. And, these issues can often be corrected before a robot ever breaks down.”

Gathering machine data can be beneficial in a myriad of ways, including information as to how much life is left in the transmissions. This can be especially helpful when redeploying robotic systems.

For automotive manufacturers and businesses that are expanding or upgrading robotic spot welding capacity, fully configured, ready-to use robot packages promise high quality and performance. In that category, ABB’s IRB 6700 SpotPack relies on durable hardware and easy-to-use software, serving as a model of the advancements that robotic spot welding has achieved throughout the years.