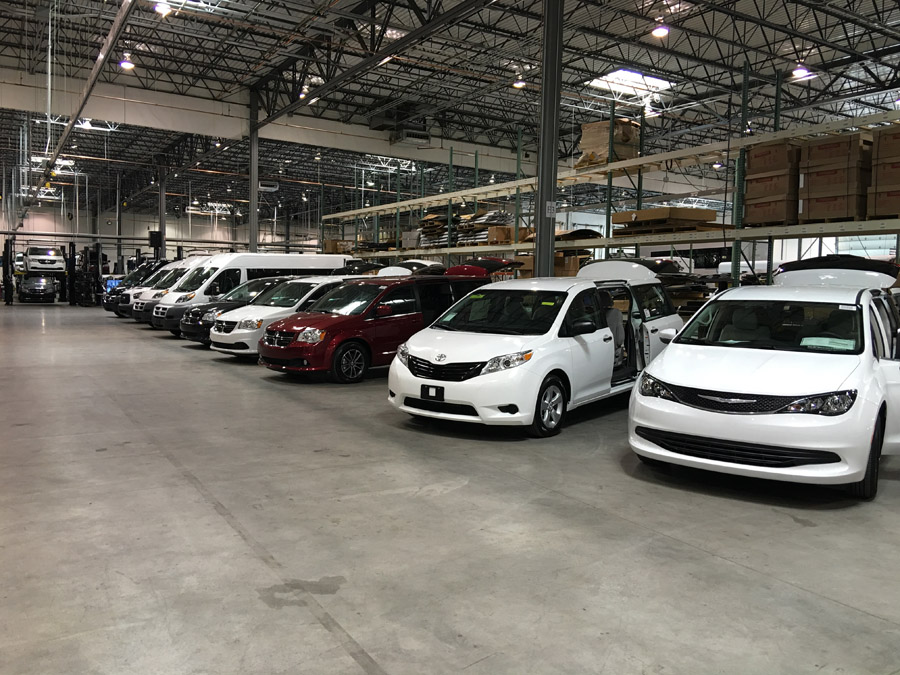 The median monthly earnings for adults age 21 to 64 years old with a disability is $1,961 compared to $2,724 for those with no disability. Although accessible public transportation assists those with disabilities in getting to work, medical appointments and social activities, sometimes it’s not enough. This is where a special-needs conversion vehicle comes into play.

People with disabilities often make less money yet they are stuck paying a higher price to purchase a conversion vehicle. The cost for a disability vehicle ranges from $40,000 to upwards of $100,000. This is more expensive than the 2016 best-selling car in America, the Toyota Camry that sold for an average price of $28,189. This is where Eliyahu Rosenbloom found his niche.

FR Conversions Inc. was founded in 2008 by president and owner-operator Rosenbloom. He was shocked at the prices for special-needs conversion vehicles and how people were forced to sacrifice just to afford them. The high prices also resulted in customers having to purchase vehicles previously converted to someone else’s needs. Rosenbloom was determined to do something about the situation.

To step up to the challenge, he created a list of criteria to make conversion vehicles more cost effective while maintaining the uncompromised safety, quality, comfort, service and technology that customers needed. With more than 10 years of experience as an emergency medical technician and owner of companies that revolved around automotive mobility, he was truly the right person for the job.

Initially, the company used two plasma tables to keep up with its flood of orders. After two years, however, Rosenbloom decided that a third plasma table was needed. For the first time, he made a trip to a Fabtech show, the one in Chicago in 2013.

Although his mind was on a third plasma table, Rosenbloom decided to see what other technology was out there since he was at North America’s largest metal forming and fabricating event. After seeing the edge quality, speed and accuracy of a fiber laser, Rosenbloom started seriously considering a laser cutting system.

At first, he thought a laser would be far too expensive to purchase, operate and maintain. But after further research and talking with the laser manufacturers at Fabtech, Rosenbloom decided it would be worthwhile to at least go back to crunch the numbers. 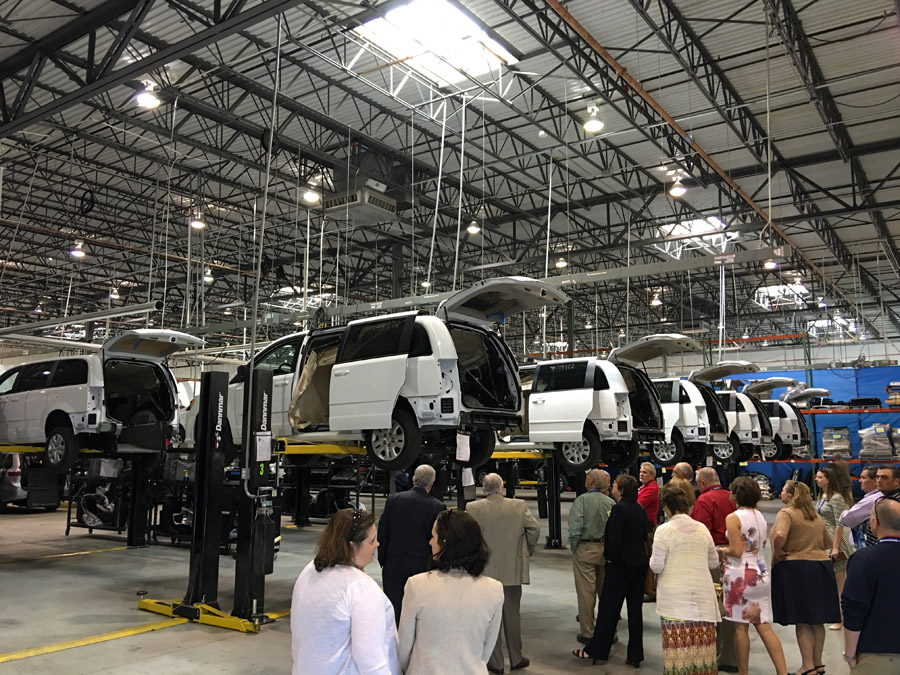 “With the rapid growth FR Conversions was experiencing, the current hours of operation, manpower and time it took for the two plasma tables to complete jobs, a fully automated laser cutting system would actually be most cost effective,” Rosenbloom explains. “It would be roughly one-fifth of the current costs.”

After researching and visiting multiple laser manufacturers with laser cutting and automation solutions ranging from $600,000 to $5 million, Rosenbloom decided on the Mazak Optiplex Nexus 3015 Fiber with a 24-shelf compact vertical flexible manufacturing system. Serving as a factor in the decision is the flexible manufacturing system, which was designed to go beyond expected material handling systems by automating the processing of multiple types of materials and thicknesses as well as providing tower storage for raw and processed materials.

Another factor in Rosenbloom’s decision to do business with Mazak overall was how the company treated his business.

“Mazak has great machines but more importantly the people I was doing business with were humble and treated me just like they would a huge corporation,” Rosenbloom says. “It was an ideal business relationship.”

Since the introduction of the fiber laser and automation system, the need for multiple processes has been reduced. “After-cut cleaning processes have been eliminated as well as the material handling on and off the laser machine,” Rosenbloom says. 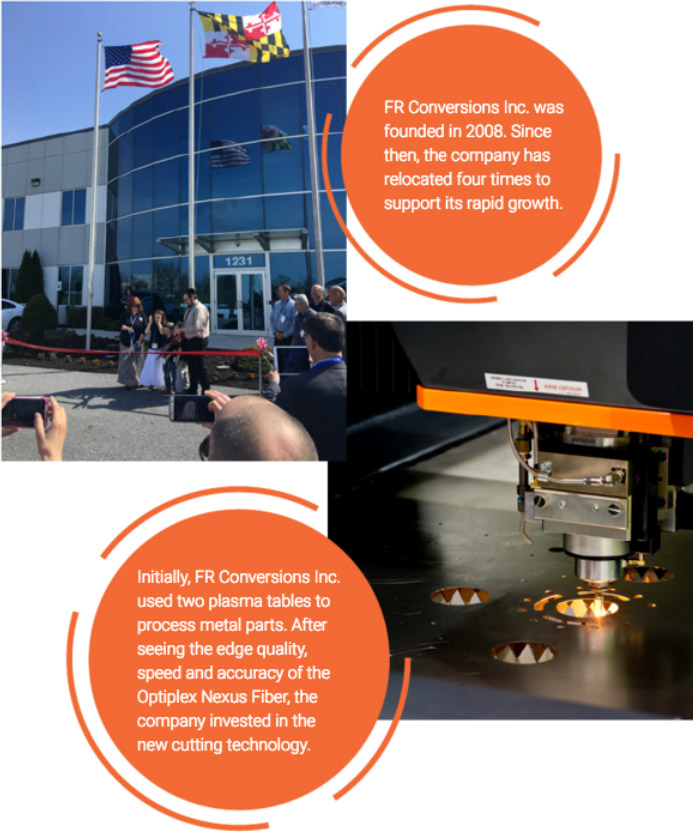 Furthermore, the fiber laser provides cut parts with such a high-quality edge that there are no secondary operations to worry about – there’s nothing to remove.

Because of the high-quality parts coming off of the laser, FR Conversions had the confidence to invest in other equipment.

Rosenbloom explains, “Bending the parts has become easier and more automated because the precision of the parts is vastly improved. The laser cut part quality allowed us to purchase higher end press brakes because we knew that these parts weren’t going to chew up and wear down the machines. Adding the laser added longevity to every part of production downstream.” 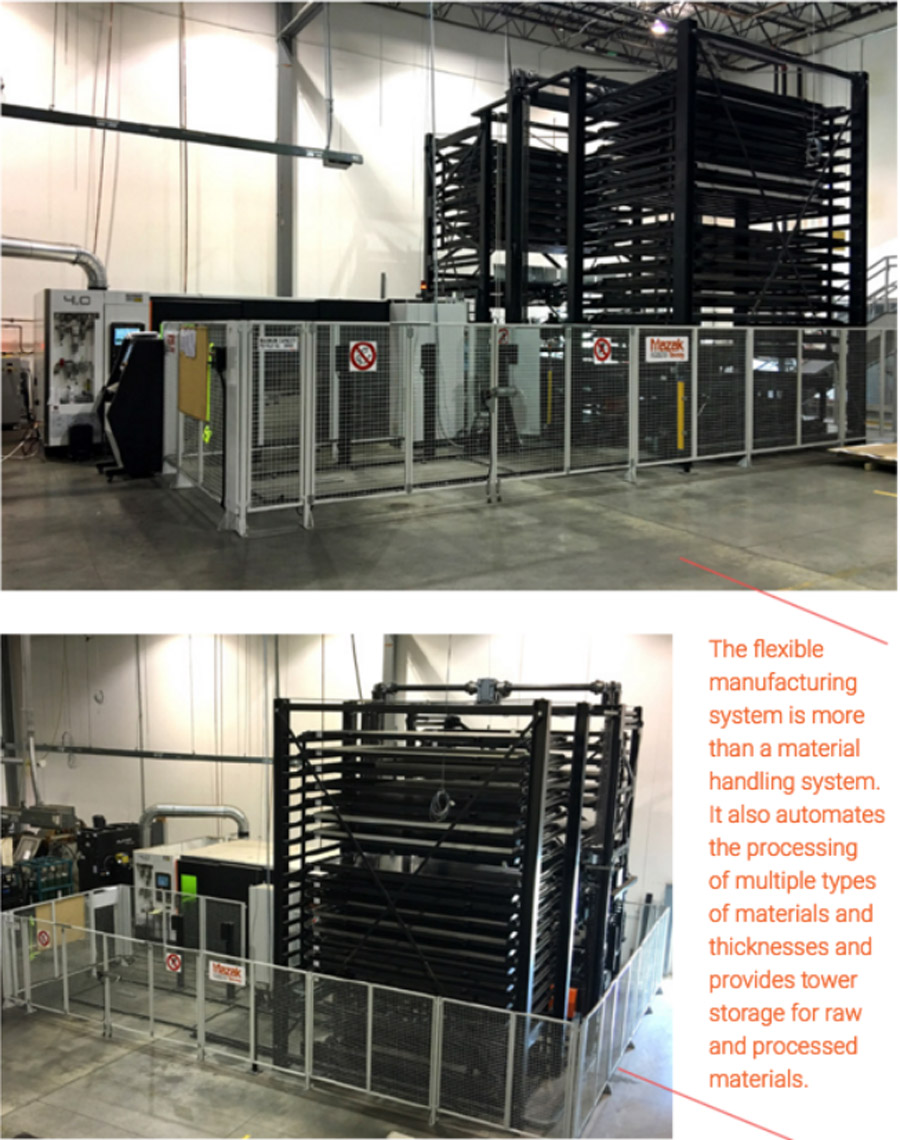 The laser and automation system have also eliminated material handling, which typically was performed by the company’s employees. Because the laser has the 24-shelf automation system, the parts are loaded and unloaded instead of being changed by someone after every cycle.

“The laser is now running at one to 10,” Rosenbloom says. “The amount of production the laser and automation system are providing would have taken 10 of our previous plasma tables to do in the same amount of time.”

As for cost savings, “Right now, the cost is mostly at a wash but in 2016 we will have realized about $20,000 in savings over the cost of the plasma tables,” Rosenbloom says. “The real returns will come as we scale out business and begin utilization at a higher rate. We estimate that this year we will save more than $100,000. We also foresee that we will have $1 million in cost savings within four to five years.”

As for other improvements, Rosenbloom describes “faster part production, fewer issues with part availability, more accurate nesting and sheet utilization, and etching part numbers as well as scribe and bend lines and instructions. We also are working on introducing micro-slotting, and once we implement that, it should vastly decrease some of our assemblies’ fabrication time.”

Another benefit is that the laser is able to cut reflective materials that have not always been so easy.

“A couple of my partners came to visit the facility and were in awe with how well the laser was cutting these difficult materials,” Rosenbloom says.

No matter the materials, if there were even the slightest bumps along the way, Mazak was there for them. “If there ever was an issue, we had a lot of support from Mazak,” Rosenbloom says. “We were never left alone. Being in the manufacturing industry, I understand things aren’t always perfect. I don’t expect perfection, but I do expect absolute support. And that’s exactly what Mazak gave us.”

When Rosenbloom first set out on his mission to offer more affordable solutions for his customers, he may have considered it a challenge. But today, with the help of new equipment and a great team, that challenge has been overcome. Just a little more than a year ago, FR Conversions moved once again to Westminster, Md., where it invested $20 million into a 152,000 sq.-ft. facility, which is six times larger than the previous location.

And the growth continues. In the first quarter of 2017, FR Conversions will launch its new ambulance division – yet another means to get people safely from point A to point B.