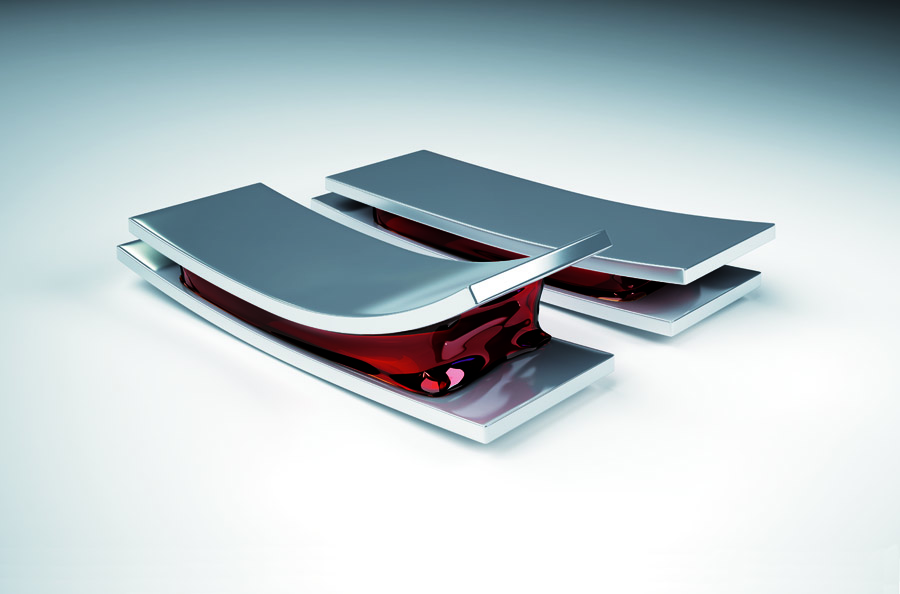 Automotive applications are driving advances and the proliferation of adhesive assembly. They’re now a primary. No Longer a Stepchild fastening method, and the fallout will affect many segments of fabricating.

Anyone who produces sub-assemblies or intermediate products for consumer-product OEMs probably has encountered industrial adhesives, but for most, it’s been a sideshow to mainstream fabrication, or a specialty. But if you’re part of the automotive supply chain, or are involved with other transportation equipment or appliances, you know that’s not the case anymore. Adhesive assembly for metal-to-metal bonds has gone mainstream – not just for convenience or cost-saving, but increasingly for greater structural stiffness and strength. 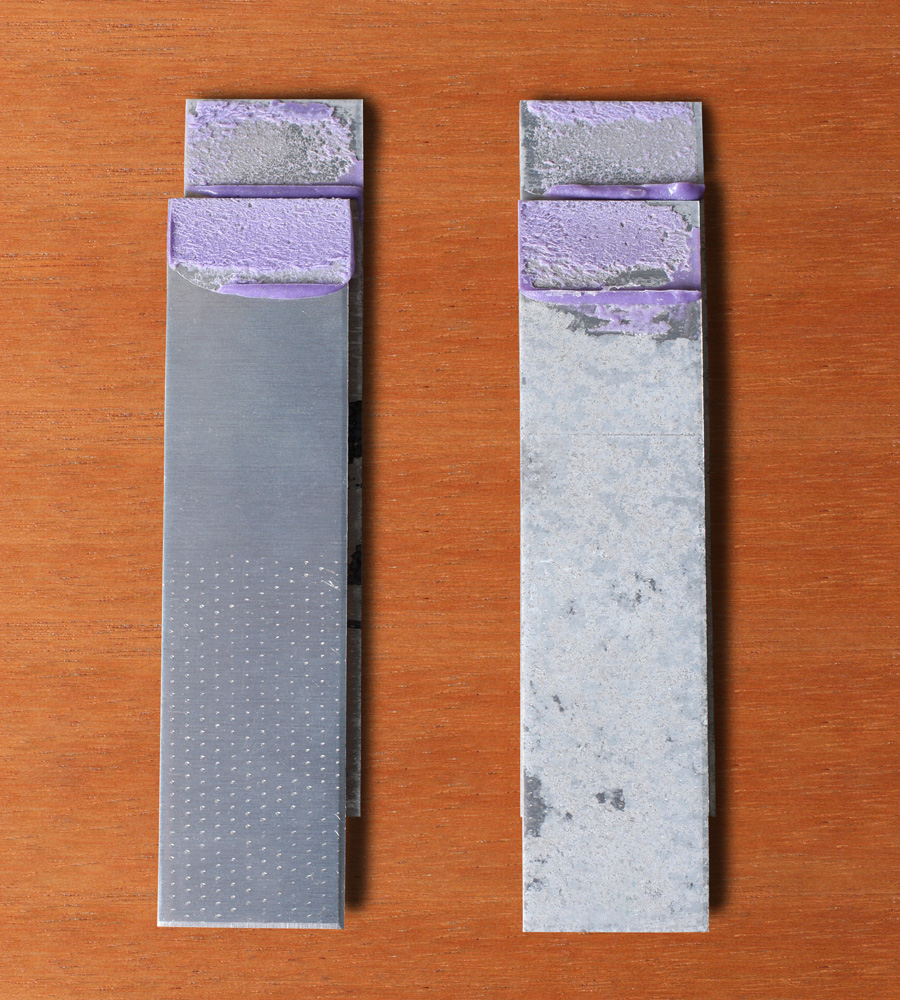 Adhesives: Salt-spray tests are used to determine effective ways to prevent road salt and other environmental hazards. Corrosion in an adhesive joint can be hidden and insidious.

The field has become so complex that, like welding, there is no way one can put his arms around the whole subject in an article, or even a book. We can, however, give an overview of the materials, processes and applications in the industry that’s driving the technology – building lighter cars – along with a sense of where the implications may lead us. That’s what we’ve done here.

Adhesives for metalworking got a couple of shots in the arm back in the 1970s, when aircraft manufacturers started to glue airplanes together, and hand power-tool manufacturers designed adhesive-assembled motors and other components to compete with the Japanese invasion. Recently developed high-strength epoxies and fast-cure acrylics and cyanoacrylates had made it all possible. There was a proliferation of adhesive types and methods of curing them, including chemical reactions, heat, moisture, and ultraviolet light. So now we have a smorgasbord of materials and processes available. We can trace them back to those earlier high-strength, fast-cure developments, but automotive applications, in the new Cadillac CT6 chassis, 60% aluminum, shows the variety of fasteners used: rivets, flow-screws, spot- and stitch-welding. Under almost all of them are adhesives.

So now we have a smorgasbord of materials and processes available. We can trace them back to those earlier high-strength, fast-cure developments, but automotive applications, in particular, have gone off on their own path. It’s a product of the materials being bonded and special performance requirements, particularly the needs to withstand the impact of collisions; the downstream processes of coating and curing; and combinations of structural loads, including the tendency of strong adhesives to peel apart. Corrosion resistance has been another issue. 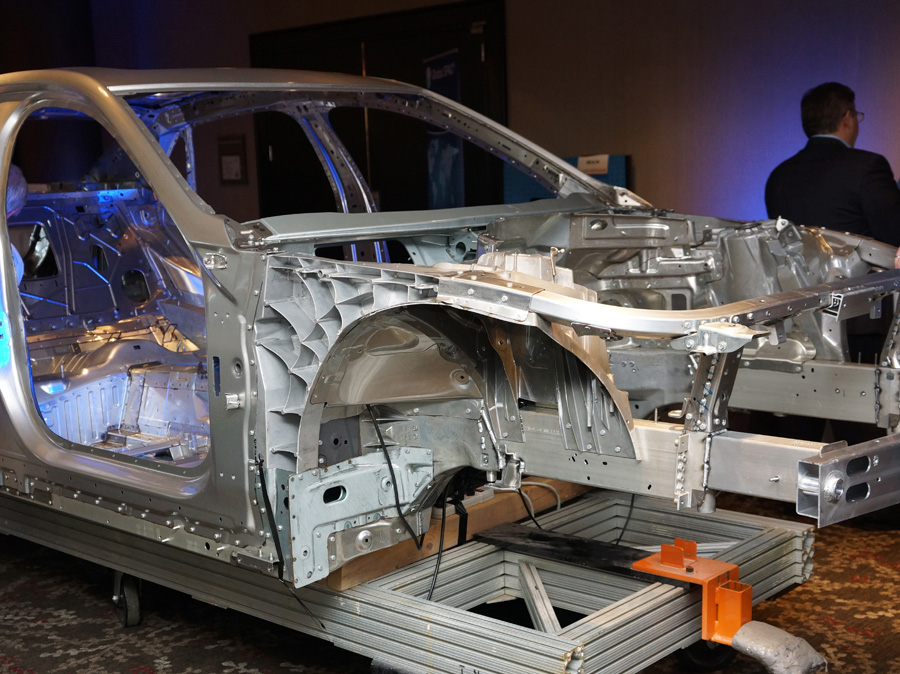 The new Cadillac CT6 chassis, 60% aluminum, shows the variety of fasteners used: rivets, flow-screws, spot- and stitch-welding. Under almost all of them are adhesives.

Dealing with dirt and oil
Look at the particular adhesive requirements of cars. First, it’s not a clean manufacturing environment, and adhesives for metals have historically required extremely clean surfaces. Stamping lubricants and other contaminants are death to traditional high-strength epoxies. They required a freshly cleaned and even a chemically etched surface to get a good bond. No more. The major adhesive suppliers formulate their newer materials to get right through oil and even some corrosion, and to get a strong, chemical bond despite it.

Except with aluminum – sort of. Aluminum starts to oxidize within seconds of being exposed to air, and that aluminum oxide is itself weak, and is weakly bonded to the base metal. If you put ordinary adhesives on it, they have no bonding strength. The time- honored treatment was a conversion coating – specifically, phosphoric-acid- anodizing (PAA), which was a standard in aluminum aircraft manufacture for decades. It required a separate, messy pre-treatment but it was necessary.

Now we have three new solutions. First, pre-treated aluminum coils, with a conversion coating already applied. These pre-treatments are becoming sophisticated and they make aluminum bonding more practical, saving a step for the car builders. Two of the biggest players in this business – aluminum supplier Novelis and multinational adhesives company Henkel – are collaborating on new coatings and have one product on the market, Bonderite M-NT 8453, that can even be applied in-process, by dipping, spraying, or roll- coating. It’s a multi-purpose conversion coating that gives a strong bond to both adhesives and to paints.

In addition to those production materials, there also are new adhesive formulations that incorporate an etch and/or conversion coating right in the adhesive. These are especially handy for repair work, but they also portend simpler processes for low-volume production. Among the suppliers producing or developing such materials is Lord Corp., which has been certified by Ford for supplying repair materials for the new, aluminum-bodied Ford F-150 pickup.

Difficult substrates
We all know that steel in automobiles keeps getter stronger and thinner, which causes problems for welding. First, those steels are weakened where they’ve been heated to welding temperatures. Second, as thin as they are, stiffness, if not strength, becomes a limiting engineering factor. (See “Welders Respond to Thin, Coated ‘Lightweighting’ Steels” in this issue). In other words, they can be too floppy with intermittent welds, such as spot- or stitch welds, and continuous- seam welding exacerbates the heat- weakening issue.

Enter adhesives. With a modest amount of overlap, the shear strength of the joint in an adhesive-bonded steel panel can be as strong as the parent metal. Applying adhesives to continuous seams is easy, either by hand or by robot.

Aluminum, once again, has its own problems. The auto makers are using combinations of heat-treatable and non-heat-treatable aluminum grades, and the heat-treatable ones can lose strength from welding, like the high- strength steels. Adhesive bonding solves that problem.

A growing issue is bonding dissimilar materials: steel to aluminum, or either one to plastics and composites. There is some development work going on for welding steel to aluminum, but adhesives have a natural advantage here, too. They can be formulated to “give” elastically, which takes care of the different thermal expansion rates of aluminum and steel. The ratio is 3:1, and it can develop enough force to shear steel right off of aluminum, if they aren’t bonded with the right materials.

Some adhesive materials
The adhesives we’re talking about are primarily of two families: epoxies and polyurethanes. We think of epoxies as two-component adhesives but they can be formulated with the chemical cure agents already mixed in, but which won’t activate until they’re heated.

This is the common structural adhesive in use for cars: a one-part, heat- cured epoxy. Because it’s often applied down the supply chain and won’t be cured until assembly is complete, it’s being formulated to handle room- temperature “open times” of 4, 6, or even 8 weeks. A supplier can apply a bead of it, hold the assembly together with a few rivets or welds, and send it up the line.

When the assembled car reaches the bake oven for curing the e-coat paint primer, the epoxy cures along with the primer, typically at around 180 deg. F. Two-part epoxies that cure at room temperature have their uses in car manufacturing, but many of these post-bake applications are being fulfilled with two-part polyurethanes. These are mostly non-structural applications, such as applying trim to the car. Several two-part materials also have uses in repair work.

Application is flexible. The adhesives typically have the consistency of caulk, and they can be applied manually, with a pneumatic caulking gun. Some supply chain companies are doing it that way. But the caulking-gun approach is a natural, too, for robotic applications. In the OEM body shops, robots apply miles of adhesive beads at very high feed rates.

Welds and rivets
The photo of Cadillac’s CT6 chassis exposes a variety of fasteners – self- piercing rivets, flow screws, spot- and stitch-welds, and, of course, adhesives. You can’t see the adhesives; they’re in the joints, of course. Wherever you see an overlap in materials, there’s probably adhesive in there. Yards and yards of it throughout the chassis.

The welds can go right through the epoxy. They leave a little burned spot, but it doesn’t have a substantial effect. It was common at one time, says Dow adhesives expert Selamawit Belli, to use skip-application of adhesive to leave room for welds. No more. They just weld right through it.

The welds and mechanical fasteners are there for two reasons. First, there is some tendency within parts of the automotive manufacturing community to want a little extra insurance. Old ideas die hard.

Second, with the long open times before final assembly, you need some other fasteners to hold the whole assembly together as it moves down the line. Once the adhesive is cured, though, their role is incidental.

Adhesive performance
Strength is a complicated issue with adhesives. They respond differently to different types of loads. Without getting into it two deeply, these are the basic considerations.

First, the primary load typically is shear. Second, if a high-strength adhesive starts to peel or cleave at the edge while it’s under a load, the joint is going to the joint is going to fail, right now. There is an old rule of thumb with adhesives: the stronger they are in tensile strength or shear, the weaker they are in peel (think about peeling adhesive tape off of your desk) and cleavage (think about splitting a log). In aircraft, where the structural adhesives have well over 5,000 psi tensile strength – sometimes twice that much — they often apply a row of rivets to the very edge of an assembly to prevent the onset of peel or cleavage.

In cars, things are different. First, you don’t need quite as much tensile or shear strength, so you can formulate them to have much greater peel and cleavage strength. The lead photo to this article conveys the idea, although that is an exaggeration for structural adhesives.

Also in cars, you have to think about impact-peel, which means tolerating the shock of a crash. And you have to be able to tolerate wet, salty environments, like road salt. Adhesive manufacturers do extensive testing and formulating to tolerate it.

Testing, testing, testing…it’s a big part of the technology. And each automobile OEM has its own ideas about what performance must be met. So Dow’s adhesives for the Cadillac in our photo, for example, are different from those they’re supplying to Ford for their F-150.

That’s the overview on structural adhesives in cars. FAB Shop is introducing some specific, fabricating- related adhesives coverage to our scope, which will move beyond cars but which, necessarily, will be closely tied to it. Cars are where most of the action is on structures. They’ve taken adhesives to their heart, and we must, too. 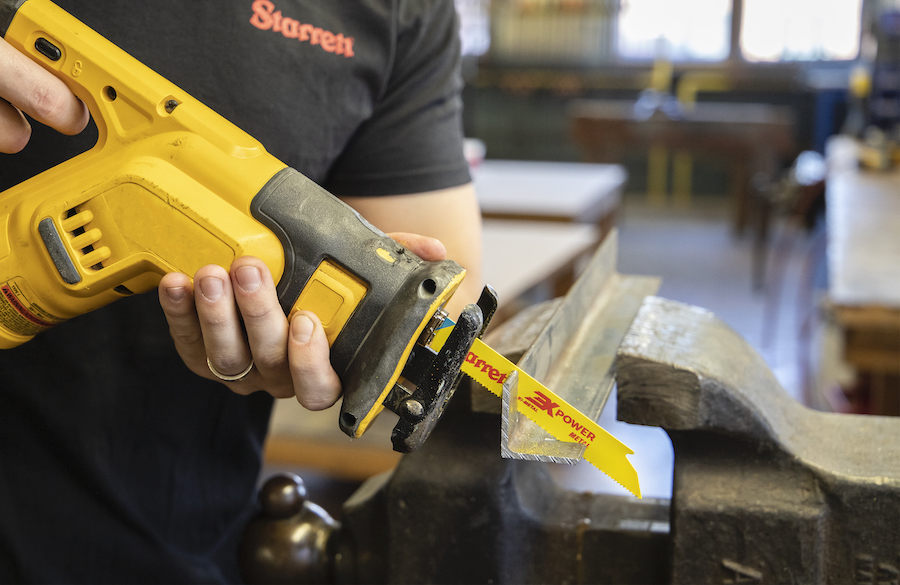 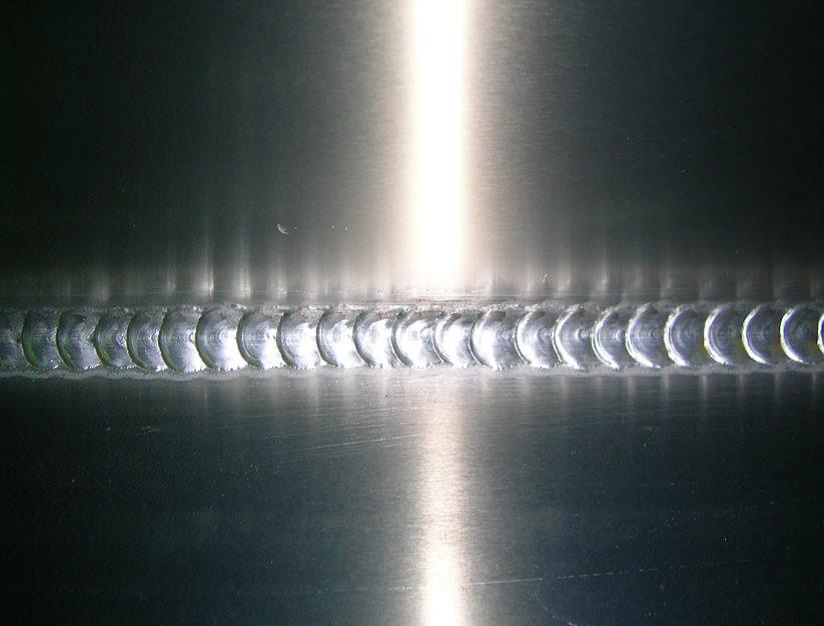 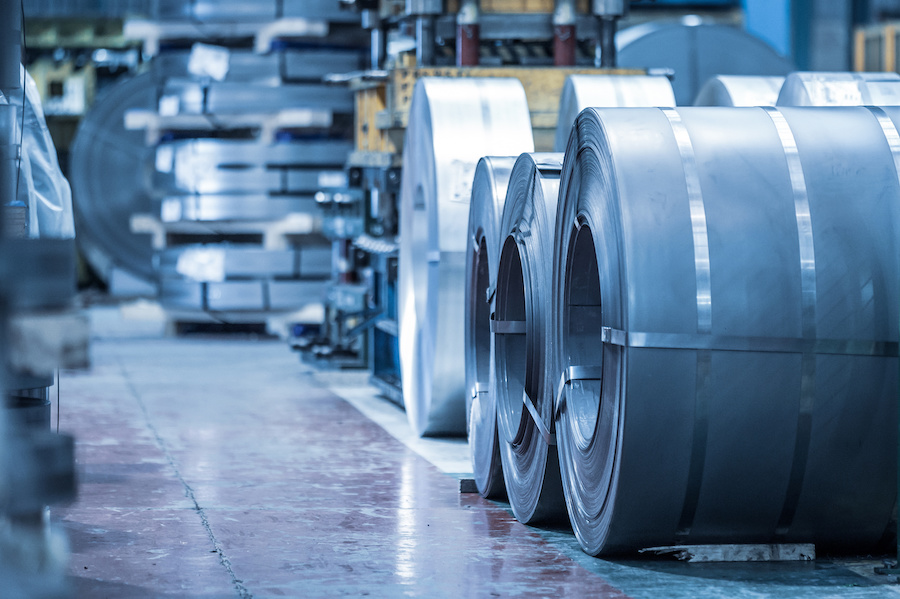