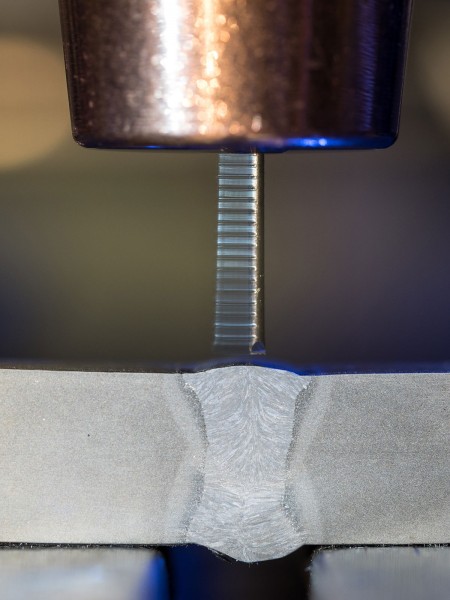 Quality is an equally important benefit. “The rotation itself spreads the arc energy out and provides a very consistent penetration and bead profile for the weld,” says Scott Funderburk, Weld Revolution’s chief operating officer. “The quality is higher than that of a typical weld.”

“We replace that existing welding cable and torch with our mechanized welding MA-400 air-cooled machine torch system,” Funderburk says. “At the end of the torch, where the welding takes place, the wire itself rotates in a conical fashion. This is controlled by a motor inside the welding torch.”

During the process, centrifugal force detaches the small molten droplets from the welding wire and directs them at an angle into the sidewalls of the weld joint, creating a consistent and good weld bead. The rotation enables high deposition rates.

The welding operator sets the typical welding parameters, such as wire feed speed and travel speed, on the SpinArc. The system works with any standard constant voltage (CV) power source or advanced pulse welding machine.

The operator also has three variables to set specific to the rotating arc: spin diameter, spin speed and spin direction, which can be clockwise or counterclockwise.

The required spin diameter depends on the application. “If you want to make a weld in a narrow gap and you are welding it to a thick piece of steel, you may select a smaller diameter,” Funderburk says. “In other cases, such as welding corrosion-resistant materials, it is better to have a large diameter where you want a big weld bead.”

A bunch of benefits

Rotating arc welding enables welding all metals in any position. This can be achieved by using solid or metal-cored wires in spray transfer or pulse modes.

“You can weld out of position with pulse, but it requires sophisticated welding equipment and you’re limited to moderate wire feed speeds,” Funderburk says. “By just adding the SpinArc system where the centrifugal force holds the metal in the joint, you can take conventional welding technology and weld out of position in spray transfer mode at very high speeds with high deposition rates.”

Also, “Typically, some industries use flux-cored gas shielded wire because the slag system allows you to weld out of position,” Funderburk says. “Because you don’t need that slag system with SpinArc, you can use solid or metal-cored wire with its higher deposition rates and lower diffusible hydrogen levels.”

Because of enhanced sidewall fusion, narrow groove welding is possible with rotating arc welding. These types of weld joints are common in offshore and cross-country pipeline construction. And the welding approach can be extrapolated to other industries that weld heavy-wall pipe and thick plate.

Also, the weld joint can be modified so the need for beveling is reduced or eliminated. “For example, when welding large plate for oil storage or shipbuilding, many times you have to bevel it, weld one side, flip it over and backweld from the other side. With our system, you eliminate the bevel operation, and its increased safety risks, because you don’t have to flip it.”

The stirring action of the arc in the weld pool results in cleaner welds with enhanced properties. It allows for welding of “sluggish” materials. With nickel-based alloys or stainless steels, traditional welding results in a ropey weld bead. With the SpinArc system, the arc flattens the puddle, spreading out the energy. The resulting flat weld is better for a variety of applications.

Dick Roen, chief technical officer for Weld Revolution, developed the rotating arc welding process. After serving in the Navy during World War II, Roen became a welding engineer. He eventually worked for the Martin Co. (before it became Lockheed Martin). It was at this time that he developed the rotating arc welding idea to solve a particular problem he couldn’t solve with traditional welding. Roen never commercialized the technology, although he conducted numerous welding trials focused on pipe welding barges in the North Sea.

In 2011, Roen was introduced to Eric Christofferson, eventual president of Weld Revolution. After meeting Roen, Christofferson recognized the value of the rotating arc welding technology. Weld Revolution began in 2012 in Spring, Tex., finally bringing this technology to market. The MA-400 SpinArc air-cooled machine torch was launched in May 2015. Weld Revolution is currently adding global distribution and new products. Everything is made in the U.S.A.

The SpinArc could be an easy upgrade to an existing welding system. It can be manually or remotely controlled by a robot or other mechanized device like a Bug-O System, which enables fast travel speeds. An optional hand welding kit is available.

Rotating arc welding is for large-volume applications. “If you are not looking for the increase in productivity, SpinArc may not be cost effective,” Funderburk says. The SpinArc hand welding gun for the average welder will be available later this year. It will have the same benefits as the machine torch, but at a lower starting cost.

“But it is easy enough to help fabricators realize benefits with any SpinArc system,” Funderburk says. “You see an ROI very quickly with short payback periods.”