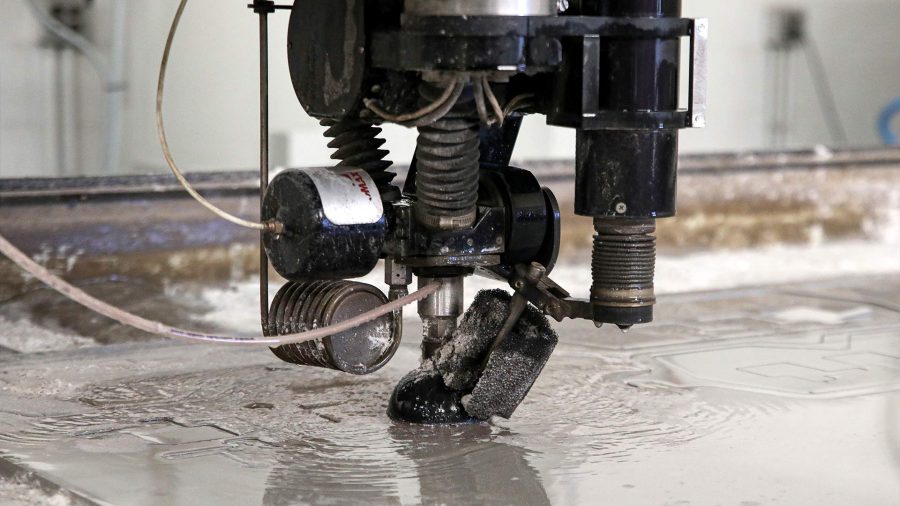 It’s a common scenario – a job shop outsources waterjet cut parts for years and years, until eventually making the decision to implement a waterjet of its own. “I wish we’d done that sooner” is a common response.

Ryan Skarb, facilities and maintenance leader at Ace Metal Crafts Co., a Bensenville, Ill.-based job shop, said his company outsourced all of its machining needs for years, but began acquiring mills and lathes to bring more of the machining in-house. In 2016, the company bought a used waterjet machine, and despite it being nearly a decade old, the value was almost immediately apparent.

Skarb says acquiring the waterjet was a great introduction to the technology, making the team more knowledgeable about how it could positively impact the company, but he says they were “getting into more complex stuff,” which called for a more reliable and serviceable machine. Also, when the waterjet needed to be serviced or repaired, it required calling in a service tech from Wisconsin to do the job. This was another reason the company considered upgrading to a newer machine – more service options.

Skarb researched waterjet manufacturers and recognized that Omax was a “large player in the waterjet market.” Ace is considered a top stainless steel fabricator and “we’ve got to have the right equipment.” He reached out to his contact at Innovative Technology, a nearby provider of tools that U.S. manufacturers need to compete in the global market, to inquire about Omax waterjets, which the company represents. Skarb knew that having that local connection (Innovative is based 25 min. from Bensenville) meant that when the machine needed servicing, the representative from Innovative would be there for him.

“I have a team in my corner,” Skarb says. “It’s a given that there will be maintenance on the waterjet. I can order parts and they’ll be here the next day.”

Bringing in a new machine today is a lengthier experience than it was prior to the pandemic. The wait time for some of the recent machines Skarb acquired includes a laser built overseas that took months and months to arrive. Because Omax is based in Washington state, Ace’s new waterjet was installed three weeks after it was ordered.

The Omax waterjet Skarb and his team chose is the OptiMax 80X with a 50-hp pump, which was installed in October 2021. It can achieve a cutting pressure of 60,000 psi. The cutting table can hold materials up to 72.5 in. by 155 in., which is a bit larger than Ace’s laser beds.

To ensure Ace was getting the machine that fit its needs today and anything that could pop up in the future, Skarb looked up the last 10 years of parts outsourced for waterjet cutting. He also looked at what has been cut on the older waterjet since it was implemented in 2016. Ace’s “bread and butter” thickness is around 5/8 in., Skarb says, and it rarely cuts anything more than 3 in. thick, which the 80X can easily handle. Furthermore, he says 99 percent of the work is suited for the laser and waterjet table sizes.

“The reason we chose the 80X is that it fit right into our wheelhouse,” Skarb says.

Omax refers to the 80X as the “pinnacle of high-performance precision abrasive waterjet cutting machining.” Standard features include the IntelliMax premium software and IntellicTrax abrasive jet linear drive system, which provides 350 ipm traverse with real-time closed-loop positioning feedback. It’s also capable of submerged cutting that is cleaner, safer and quieter, operating below 80 dBA. For reference, a typical conversation is around 65 dBA.

One of the most obvious perks Skarb has noticed since implementing the 80X last October is that while it cuts faster than the machine it replaced, it’s the repeatability that impresses him most.

“It’s the repeatability of it and how it holds our tolerances,” he says. “The standard tolerance on cutting is ±0.050 in. Yes, the waterjet can do better, but as long as the operator comes in and does the morning routine, we know the machine will hold to 0.050 in.”

Why is that repeatability important? Many Ace customers have parts that  if the cut quality isn’t there will not fit together without secondary work.

“With the waterjet,” Skarb says, “we’ve been able to specify certain cut qualities. With our nesting software, our engineers can look at a part and set the cut quality at the part level, so that when we run it on the waterjet, our operator doesn’t even have to look at it. We weren’t able to do that with the previous machine.”

One of the costliest consumables on a waterjet is the abrasive, which for metal cutting is almost always garnet. Because Ace’s former waterjet lacked the technology to track how much garnet was being used, Skarb can’t make an apples-to-apples comparison but with the new machine, they’re now definitely buying less garnet. Another perk is that the improved technology on the 80X provides more precise control over how much garnet is added to the waterjet stream.

“The price of garnet, like everything else in this world, has gone up by the pound,” he says. “I couldn’t even tell you how much the other one was using but with the Omax, I can tell you it uses 1.27 lbs./min.”

Skarb has horror stories about draining the old machine and spending nearly two days shoveling out upward of 10,000 lbs. of garnet, which also had to be disposed of at a high cost. He no longer has to revisit those days, as Omax offers a solids removal system (SRS), which is available in a variety of sizes, capable of handling between 100 and 2,200 lbs. of waste. The SRS automatically feeds used garnet into a hopper next to the cutting head and transports the material 20 ft. to 30 ft. from the machine.

When Skarb does research on the machines Ace intends to implement, he does a deep dive. He takes part in the training alongside operators and others who need to know how to operate and keep the machines running at peak performance. He knows that ease of use is incredibly important in just about every manufacturing application today and Omax has made that part of its approach to waterjet applications. 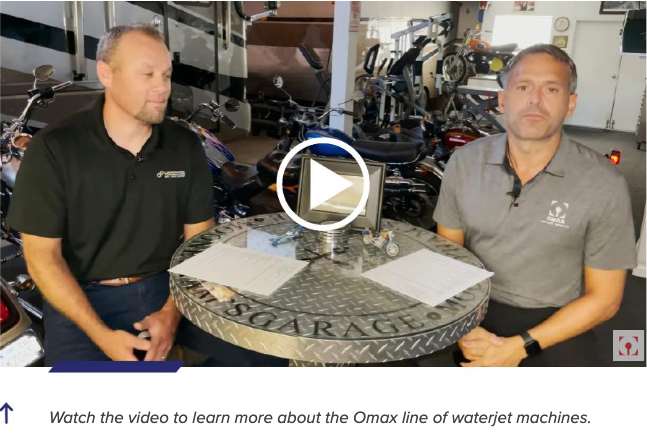 “I had never run a waterjet a day in my life and I was able to pick up on it in five hours of training,” he says of the Omax training experience.

Skarb has worked with just about every major company that provides equipment to the manufacturing industry, from press brakes to lathes and lasers to welding equipment. He never encountered a comprehensive approach to self-servicing a machine until he bought the 80X. Omax has an online video tutorial or PDF users can refer to when doing any type of maintenance or repair to the machine, whether it’s something as complex as a pump rebuild or as simple as changing a nozzle. Omax also offers assistance from waterjet experts available by phone from their Kent, Wash., headquarters.

“I’ve done a couple of part replacements and each time I just opened up the e-learning site and did it myself,” he says. “And if I do have an issue, I can make a call and get through it. I don’t worry about it.” 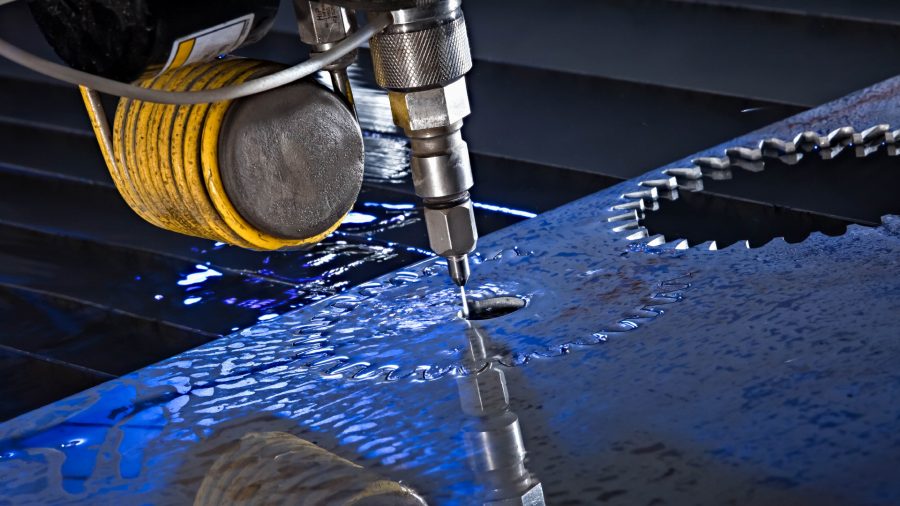 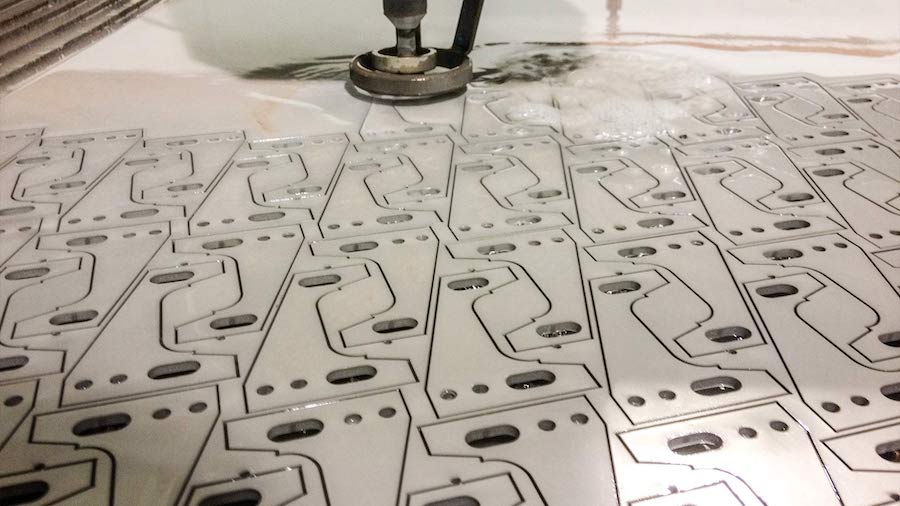 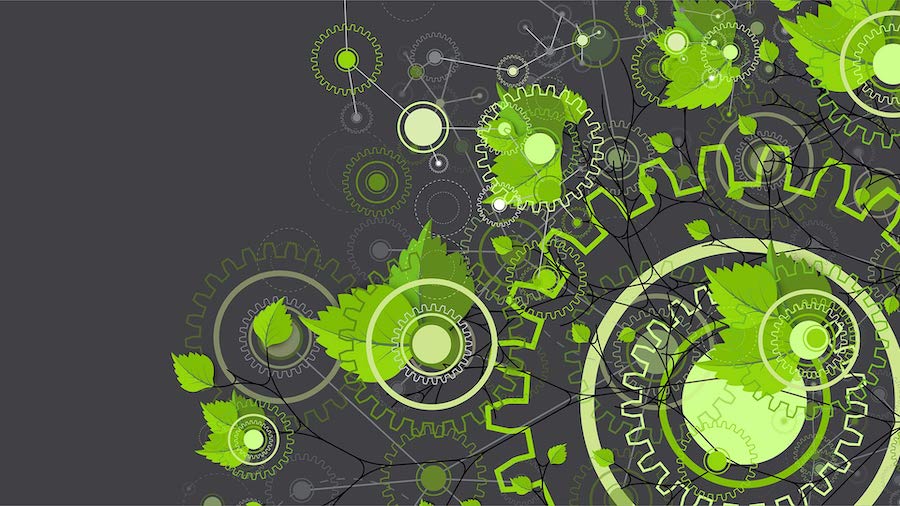 Lasers
Green manufacturing
Several leading equipment manufacturers share the impact that sustainable initiatives are having on their businesses and the planet
Apr 06, 2022
Search
Subscribe
Categories
Magazines