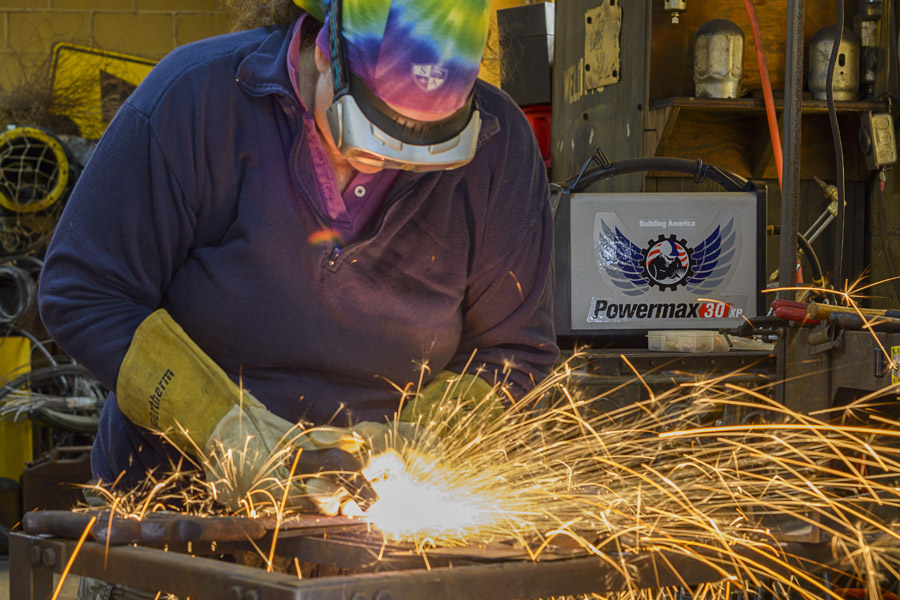 Listen to Cindy Chinn speak and you can’t help but be entertained. Full of energy with unlimited artistic vision, this one-time creative art director is now who her neighbors call “The Saw Lady.”

“People will yell it out, ‘hey, Saw Lady’ to me at flea markets, yard sales and around town,” she says.

The California native has always loved art, training at the Academy of Art University and at San Francisco State University, before making her way to Las Vegas where she spent her days designing slot machines and video game art. She was even the lead animator for Disney’s Lion King video game.

Chinn and her partner, Art Whitton, started their own creative services company, serving clients in Nevada and Oklahoma. Chinn was happy. Things were humming along as they started making plans to build a 600-sq.-ft. artist’s studio behind their home in Las Vegas.

While waiting for the building permits, Chinn happened to find a 14,000-sq.-ft. school in Nebraska that was up for sale. It cost nearly half as much as her planned studio. The couple ultimately passed on the opportunity because the school was too far away from the airport, but the seed was planted.

The pair kept looking, finally finding what originally served as a K-12 school in Chester, Neb. For $100,000, Chinn and Whitton became the proud owners of a 33,000-sq.-ft. school, complete with its own gym. It wasn’t long before the moving trucks – three in all – rumbled into town.

That was more than a decade ago. The small Nebraska community, with a population of 232, hasn’t been the same since, in large part because of the couple’s artistic passion and community-minded spirit.

Though she is most noted for her miniature carvings created from pencils, it is Chinn’s work with plasma that captured Hypertherm’s attention. Chinn says she purchased an “inexpensive combo thing” online and began practicing her plasma cutting technique. She did that until she ran out of things to cut in her studio. Then, she started going to yard sales.

At one sale, she stumbled upon 14 old hand saws. Inspiration struck and Chinn purchased the whole lot. Back at the school, she started drawing on the saws, creating intricate outdoor scenes before cutting out her designs with plasma. Soon, a new business opportunity developed. While Chinn was busy cutting, Whitton was busy photographing and adding the saws to a new The Saw Lady website he had created

At first, the saws just sat there, but then around Christmas 2015, the orders started coming in. The couple soon had 150 orders in front of them. At this point, it was clear the “inexpensive combo thing” wasn’t going to do the trick. Chinn needed something more substantial. 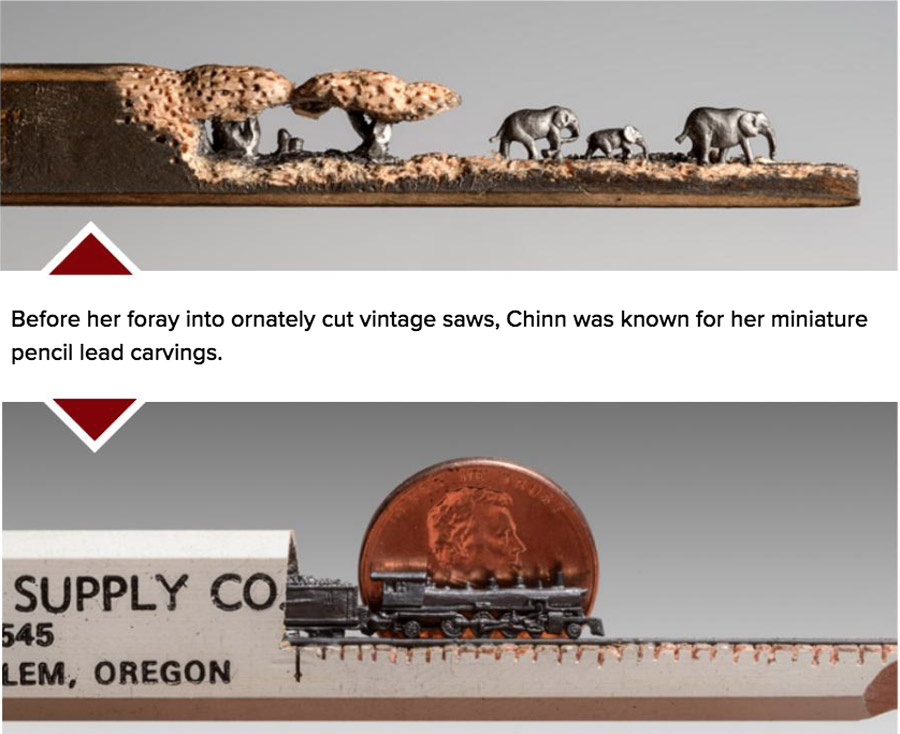 She researched extensively before selecting a Hypertherm Powermax30 XP. The system’s FineCut consumable option was one of the features that was attractive to Chinn.

“Fine tips are necessary for this work,” she says, “and I go through a lot of consumables. I need to change consumables often, before they arc-out. If you’re cutting out a deer and the arc goes out to the side, your four-legged deer becomes a three-legged deer, fast.”

Chinn says her Powermax30 XP is performing admirably. It definitely gets put to good use with Chinn spending up to 15 hours a day cutting out saws during the November and December holiday season.

“My partner lets me know when I need to get into the shop to make saws,” she says. Though the days are long, Chinn is happy people like her designs so much. Everyone that is, except for one man in California.

“I did receive hate mail from a fine finish carpenter in Berkeley,” she recalls. “He was so upset that I was cutting up these old saws so I invited him to my shop and offered him the opportunity to rescue any and all saws that he wanted. We exchanged a few more emails and eventually a rather absurd friendship blossomed. It is all positive now.”

Sourcing older, rustic saws is now a constant, but fortunately, her adopted community of Chester is there to help.

“I never buy saws from antique dealers because their prices are too high,” Chinn says, “but I have an army of saw hunters now. There have even been a few times where I’ve come home to find a pile of saws outside on the picnic table in front of the school or on the steps of the main entrance.”