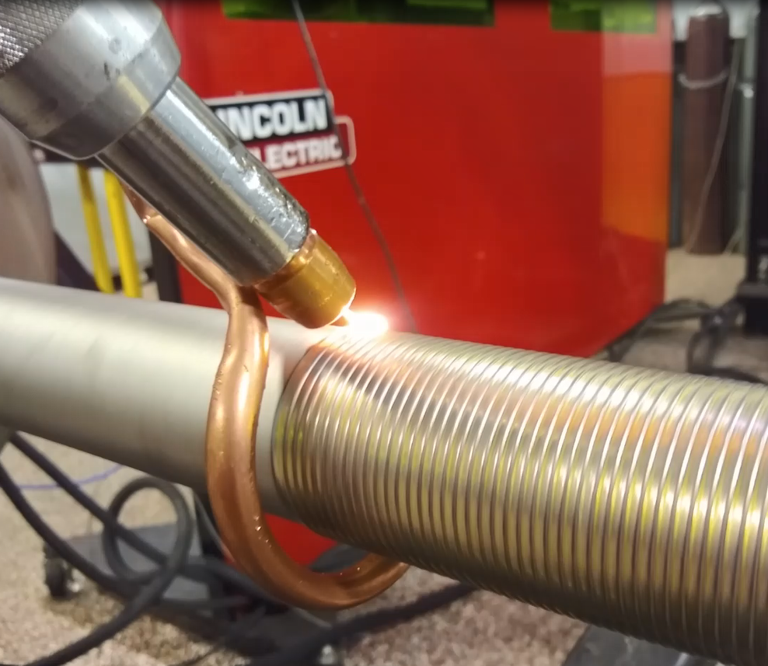 Being flexible is what makes the laser hotwire process so applicable for a variety of materials and applications throughout many industries. As it happens, adding heat through the filler metal has proven to be a very efficient way of increasing deposition rates and travel speeds while reducing overall heat input. This means it can be a better choice over traditional MIG and TIG processes, such as cladding, brazing, welding and additive manufacturing.

“Laser hotwire is an extremely flexible process because lasers are inherently extremely flexible,” says Kyle G. Smith, group leader, laser applications at Lincoln Electric. “We can change the power level and change the actual diameter of the laser beam. So, we can do a lot on the laser side and then adding in the wire really allows us more flexibility to do cladding and welding.”

The laser hotwire process combines heated welding wire with a laser beam to create the necessary heat. The wire is heated by electrical resistance (hot wire). This brings the wire almost to its melting point before it enters the molten weld pool but special controls in the power supply monitor the condition of the wire and prevent it from arcing.

“The combination of two energy sources allows us to hit much higher travel speeds and deposition rates,” Smith says. “We maximize as much energy as we can into that wire to increase the deposition rate. If you’re feeding in wire that is at room temperature (cold wire), you’re fighting against the laser beam.

“The way to best explain laser hotwire is you get TIG welding quality at double the MIG welding speed,” he continues. “You get a high-quality deposit at a high travel speed and you can control the process so much better than MIG or TIG because you can change the laser power very accurately. You can change it down to a tenth of a watt over thousands of watts so it’s very controllable, which gives it the high speed and quality that is needed, especially in a cladding operation.”

Recent advances in laser technology and power supply electronics, such as Lincoln Electric’s Power Wave LHW, have improved the capability and performance of laser hotwire systems. They provide a high level of control of monitoring the condition of the wire as it goes into the weld pool. The rest of the system operates similar to MIG welding, including the wire feeder and welding torch.

As mentioned, the laser hotwire process is excellent for cladding operations, offering many benefits over traditional cladding. The traditional process often requires multiple clad layers to be applied to reach the proper chemistry and tends to deposit thicker layers with more heat input. Laser hotwire operates at higher speeds, which results in thinner layers with less heat input and less metallurgical change to the base material.

“For cladding, a lot of times we’re putting an entire layer on a large shaft,” Smith says. “We’ve done a lot of studies that prove we can put thinner layers on with laser hotwire and still get the same performance as a MIG or TIG welding process at higher travel speeds. You maximize your consumables usage and also complete the weld at a higher rate of speed.”

The lack of arc associated with the laser hotwire process means the weld can be precisely placed, even in very narrow and deep grooves. Without an arc, groove geometry can be drastically adjusted, resulting in much less filler metal volume being required. Often, only one weld pass is needed per layer, even in thick materials.

“The diameter of the laser beam itself is what determines how wide or deep of a weld you can get,” Smith says. “For instance, we were working with material about a 1 mm thick and putting in a weld about a 1 mm wide. You wouldn’t be able to do that with any other process but we could with laser hotwire because we can focus the laser beam down that small.”

“The space where laser hotwire additive manufacturing fits in is larger, more complex exotic type parts,” Smith says. “We’re not looking to build a fuel nozzle. We’re looking at parts that are the size of a basketball or larger. It’s a great alternative to MIG welding because they can do fast builds with common materials, like stainless steel.”

The process in use

The original patents for laser hotwire process were given in the 1980s, “but the technology didn’t really catch on until the last 10 years or so,” Smith says. “We’ve seen more interest in the last five years especially and it’s becoming more popular year after year. The younger generations especially are interested in newer technologies and taking advantage of what is available today. We’ve implemented this system worldwide. I’ve been to Australia to install one.”

The laser hotwire process is exclusively a robotic application that that fits in many industries. It is used heavily in the remanufacturing of large parts. The oil and gas and power generation market is another area that benefits from laser hotwire.

“They’ve really adopted laser hotwire,” Smith says. “The volume of deposition is typically high in that industry, especially in power generation. If you are working with tubes that are 50 ft. long and 3 in. in diam and you’re putting filler metal on top of it, you want to do it as fast and accurately as possible so you don’t overweld your components.”

The automotive industry also uses laser hotwire for brazing, although laser manufacturers have improved the lasers used for brazing to work better with a cold wire feed, according to Smith.

He adds that the laser hotwire process is used in the automotive space from a joining standpoint. “Higher strength steels don’t like to be laser welded by themselves because of cracking issues. If we add wire to the process, we’re able to eliminate the cracking. Aluminum is another great example. A lot of aluminum is 6000 series so trying to laser weld that would result in cracking. Instead, we’re able to add in an alloy and weld the joint similar to MIG and TIG welding but we’re able to do it much faster.”