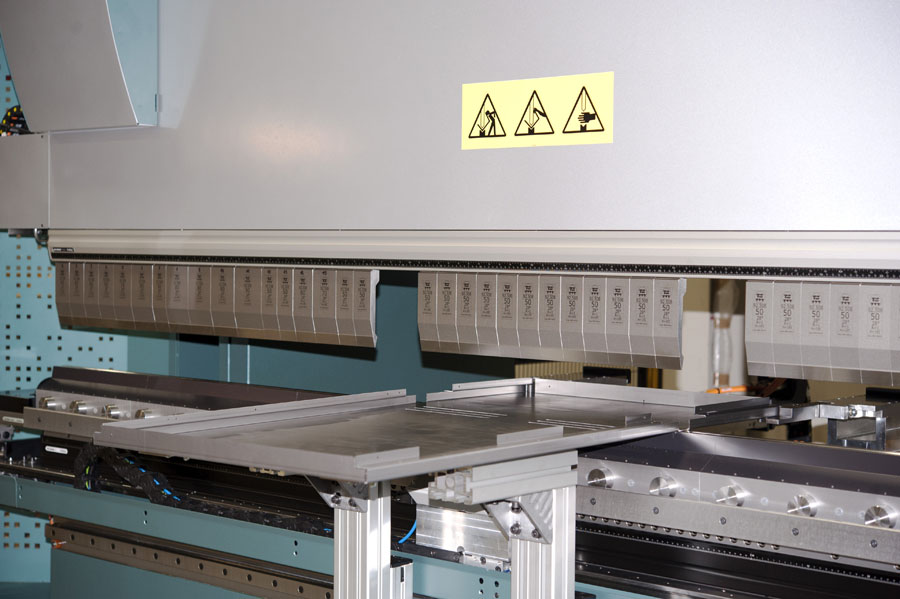 Tools remain on the ram in the B3 ATA. They’re moved along the length
of the ram, under CNC, for different work configurations.

As automation evolves, it often simplifies. The first step in automating machine tools typically is a straightforward replacement of manual operations, like using a robot or an onboard toolchanger to swap punches and dies. Sometimes re-thinking the operation produces a simpler or faster result. Salvagnini’s B3 press brake with ATA (automatic tool adjustment) is a recent example. Instead of changing tools, it adjusts the width of the V-die opening and slides punches along the press brake’s ram – automatically, under control of the machine’s CNC.

This series of frames shows how a sequence of steps can be accomplished on 10 individual parts in a ‘kit’, which are made from three different materials in four different thicknesses – without changing a single tool.

Spacing of the punches is one of three components of the system’s flexibility. An arm behind the ram slides punches into different positions to accommodate each bend. The die opening adjusts for different thicknesses. And the laser bend-angle detector provides feedback to automatically compensate for different degrees of springback in different materials and thicknesses.
Each adjustment takes only six or eight seconds. 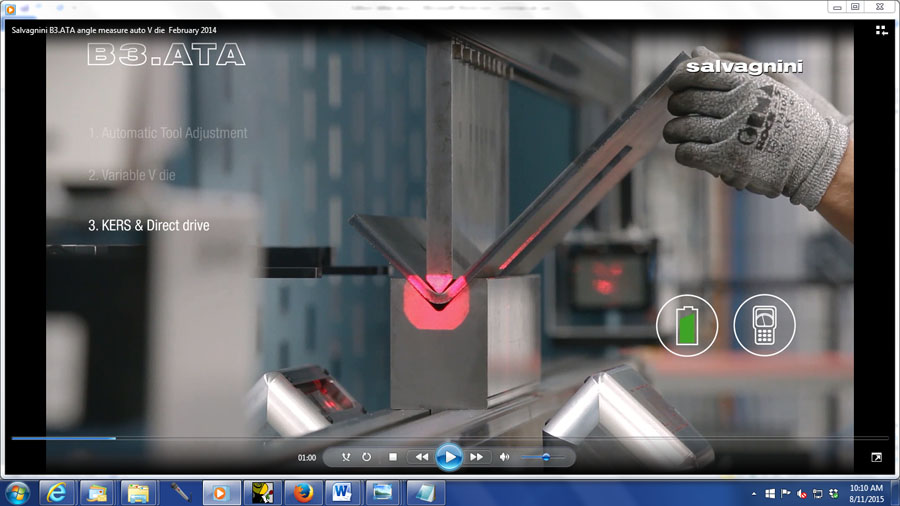 This video shows the whole story on the B3 ATA better than we could do it in words. It’s worth watching.

“The machine will rearrange the tooling in six seconds,” says Bill Bossard, president of Salvagnini America. “By the time the operator can turn around and pick up the next part, the tools are ready for him.” The concept is simple, and the operation is easy to follow: “What we’ve accomplished with this machine is a number of things,” says Bossard. “Number one is the ability to process multiple material thicknesses without having to change the V-die. The adjustable V-die will handle material thicknesses from 0.024 in. through 1/4 in. Workpiece lengths can range up to 3.8 m. “Number two is a system that lets us rearrange the punch tooling. Unlike tool-changing machines, where you actually take the tools out and replace them with different tool combinations, we’re using a rearrangement approach that is fundamentally based on our panel bender technology, where the tooling just rearranges itself for short side and long side requirements. The punches always stay in the machine. The system just splits the distribution of the tools along the ram at the correct places for the parts in question.” Simple, very fast, and quite versatile. Although there are only two mechanical components to the ATA system, there is another component that is vital to the whole operation. “The third component is a laser angle measurement unit,” says Bossard. “It gives you the ability to adjust to a wide variety of materials and thicknesses. It doesn’t even matter if the material of one type has some thickness variation or some mechanical property variation; it might be a little harder or a little softer. It doesn’t matter if it’s stainless, aluminum, cold-rolled, or anything else.”

The angle measurement unit detects the first bend and measures how far it departs from the desired angle, and then makes the appropriate correction to the ram stroke so you get a bend that’s accurate to within plus or minus 1/2 of a degree. To get a good idea of how this works out in practice, we highly recommend viewing the video. It’s unusually good and explanatory, with some good examples of work for which the machine is well suited. Who is it suited for? Says Bossard, “This is much more attuned to the type of manufacturing that you would see specifically in an OEM. There certainly are applications in job shops for this type of system, but we see this mostly as an OEM type platform.” There are some limits to the range of work it can handle. “Remember that this whole concept is based around air-bending-type forming. If you’re bottoming or trying to coin, or running a consistent diet of plate work, this is not the system for that. You’re not going to get better than a one-material-thickness inside radius and the outside radius is going to be, obviously, what it is with material thickness and gauge,” explains Bossard.

“There is an argument that says that the radius on the nose of the punch contributes to the inside radius that is created on the part. Generally, the width of the V-die is the determining factor as to what the outside radius is going to be. Because we have a setup of punch tooling with a particular radius on the nose, then it is what it is. Beyond that minimum, if there are specific call-outs for inside radius, our tack is to adjust the V-die width to get that radius.” In terms of part quantities, the ideal is applications for which production is done in batches, but the batches have been getting smaller. That’s where the time saving over regular toolchanging really pays off – down to “batches” of one part. “Where you have a defined range of parts.” says Bossard. “They might be a lot of different parts, but you know about them well in advance, you can plan, and they’re repetitive parts. In manufacturing, the thing that we’re hearing about on a regular basis is that ‘my order quantities are being reduced, so instead of making 50 pieces, now I make five.’” That’s the sweetest spot for the B3 ATA. Salvagnini will demonstrate one at Fabtech in November, booth # S1731.