Editor’s note: Salvagnini is excited about their press brake/folding cell, and they have a lot to tell us, so we just let them write it and run with it. There’s no point in trying to re-tell it in our words and it’s the cell interaction that elevates it from an ordinary product review. They had to make lists of things to cover the entirety of its functions; we let them make lists. It’s a lot to absorb, but it shows what kind of flexibility can be achieved with one operator, two machines, and a lot of thoughtful sensing and programming technology. You’ll be able to see it at Fabtech.

We asked fabricators for a wish list of flexible bending technology they would like to have, and this is what they told us:

* Single part production at the same velocity as batch production”

* Zero time from part to part

* Any part, at any minute

* To make whatever parts are needed whenever they are needed

* To break into a batch run, make or remake one part, and then be back into batch production

And also the ongoing problem:

Most of the above can be expressed as: “I want to be able to make any part, at any time, in any sequence, and without incurring set up time”.

Well. They didn’t ask for much. That’s quite a formidable wish list, but that’s where we’ve been headed, too. There is a way, and it’s called a Flex-Cell.

We’ve combined several similar bending technologies into a single cell that contains a press brake and a panel bender. In Flex-Cell technology, each machine supports the other sothat the whole is greater than the sum (stand-alone press brakes and panel benders) of the parts.It’s a lot to explain.

The press brake we are talking about is the advanced B3.ATA from Salvagnini. The B3.ATA is matched with a Salvagnini model P2 or P4 panel bender, with automatic setup capability.

We designed the cell components so that it can be used by any shop, for flat blanks that are produced on any turret, any punching machine, any punch/shear, any punch/laser, any laser, any plasma cutter, any water jet, or any other flat blank making capability.

That, too, is quite a list, so let’s look first at each of the two components that comprise a Flex-Cell, and howthey allow us to say “any part, at any time, in any sequence, without incurring set up time”

The B3.ATA incorporates multiple technologies to achieve the following:

* Zero setup time through the use of the scanner

* Zerochange-over time from piece to piece

* Upper tooling that automatically resets for the next piece in about eight seconds, in masked time.

* First-bend/piece-right, and that means the angle, being bent, is to be within +-0.5 degree

* The program knows what material is being bent and adjusts accordingly

* Zero setup time through the use of a scanner

* Zero change over time from piece to piece because: by the time the operator has unloaded the bend part, and is ready to put the new blank in, the machine has reset itself for the new flat blank.

* Automatic tooling adjustment, including controlling the tooling to be used for weld tabs or inside bending.

* First-piece/good-piece, through the use of our proprietary software

* The operator locates the blank, on locating pins, and pushes the “go” button. The machine takes it from there, automatically rotating the part through four sides, and opens the door when the part is finished.

If the P2 is used alone, it is capable of bending around 60, eight-bend parts per hour. 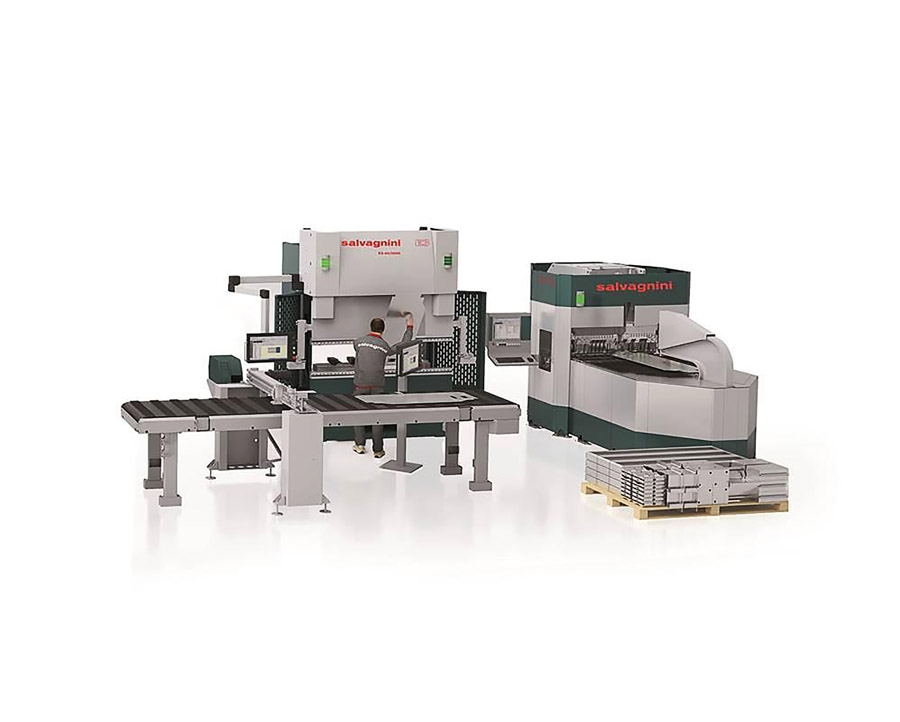 First and foremost is that each individual part must be identified and programmed into a storage device from which it can be retrieved. In most shops, this is probably a server.

Also, before it is introduced into the cell, each individual part must be identified, by a scanning device. This actually starts the process as the machines “set themselves up” from this procedure. This can be done in a variety of ways and those include:

An important consideration is that the Flex-Cell technology be able to handle the random arrival of kits of parts and be able to bend each kit (do one of each part of the kit) or each batch (batch run each part and then batch run the next part) without difficulty and in the same amount of time.

Each machine is placed so that it allows for one operator to manage the cell.

Each of the two machines has a display screen that will tell the operator how to load and manipulate each part, and to unload the part after it is finished for that machine. It also indicates whether that part needs work done on the other machine, while the screen provides the appropriate instructions. Potential operating sequences could be:

So, how do these two machines work together, in a single cell, to be able to produce virtually “any part/any minute”?

Note that we say said “virtually” because anyone could find a part, or parts, that could not be completed using this technology.

Each of the two machines will automatically adjust for the next part, allowing for one-piece production.

Assume that either the cell operator, or material movers, have located the flat parts to be bent in proper proximity to the cell, and that there are locations where the operator will place the finished parts after he has unloaded them.

The operator starts by using a scanning device to retrieve the part program(s) which, in turn, programs the machine, or machines, for the next part(s) to be done. This can be done while the brake or panel bender is running the current part.

This can be for a single part run, a small batch run, or a large batch run; it doesn’t matter to the cell which it is.

When the parts are automatically programmed, the Flex-Cell uses the downloaded information to decide which machine or machines (brake, panel bender or both) machines are needed to complete that part.

If both machines are needed to finish a part…

If it’s for the panel bender only…

If only the panel bender is to be used, the operator simply puts the flat into the machine, presses the “go” button, and takes the finished part out.

A Salvagnini panel bender, model P2 or P4, can be manually loaded, while the P4 is also capable of automatic loading from a stack of parts.

If manually loaded, a panel bender will

-give the operator time to unload the part;

-in less than 60 seconds

If it’s for the press brake only…

If only the press brake is used, the operator looks at the screen and manipulates the part as shown, and bends it as is shown on the brake’s CNC screen.

If desired, every bend can be checked and confirmed-this is what helps make single-piece flow a practical reality.

If you’re going to attend Fabtech, we’ll be glad to demonstrate it.