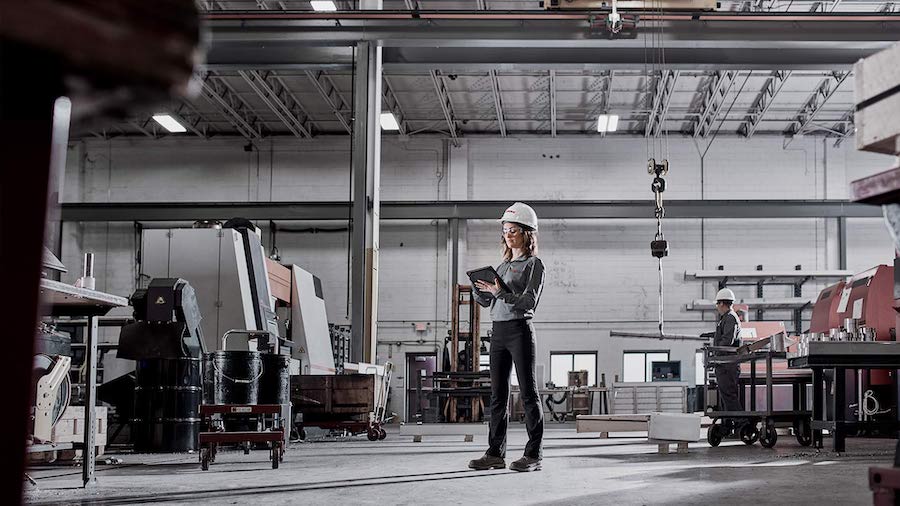 Manufacturers focus on uptime, and for good reason, because the longer the machines run without stoppages, the better the bottom line looks. But what about how efficiently those

machines are running? It’s a metric often omitted from the strategy for improved production.

Dan Fernandes, senior product marketing manager at Lenox, has heard from managers at facilities where the sawing departments have difficulties understanding how efficiently or inefficiently they operate. These are facilities where sensors have been installed on various machines, but the data never leaves the saw’s PLC, so it isn’t analyzed. Other companies, he notes, track data on paper, but are never able to really analyze it.

“Most facilities are focused on utilization first,” Fernandes begins. “After all, it is important to have the saws running as often as possible. However, we found that efficiency is often overlooked. Are facilities cutting to the best of their ability? If a job that should take 10 min. is taking 20 min. to complete, the saw running that job may have a high utilization, but it is not very efficient and not maximizing throughput and profits for the facility.”

Fernandes says Lenox 360 can be applied to any bandsaw, new or old, using a series of sensors to gather and track information from the saws and transfer that information to a computer tower near the machine for evaluation.

“That data undergoes complex calculations and algorithms and is then provided to the facility in a dashboard that can be viewed on different devices,” he says, adding that the system is capable of interfacing with a facility’s ERP system. “The data provided will enable facilities to understand in real time how they are performing and to better control the many variables that dictate productivity, efficiency and overall profitability.”

Lenox was the first bandsaw blade manufacturer to launch a digital software tool to aid in improving sawing parameters. SawCalc launched in 1990 and has been upgraded frequently in the years since its introduction. Lenox 360 is the latest digital solution from the company.

A vital part of the Lenox 360 solution is the sensors, which track many sawing performance issues such as vibration, cut starts and stops, blade speed, feed rate, cut time and application details such as material size, shape and grade. Lenox 360 also tracks how many cuts are made per blade and offers details about why blades fail.

“This data is broken down at the macro and micro levels so it can be acted upon for improved performance for each facility,” Fernandes says. “Lenox 360 is able to track every cut made by a bandsaw to which it is attached. As we launch, we are targeting bandsaws first, but the technology can be easily adapted to other machines within the facility, as well.”

Fernandes says customers that utilize Lenox 360 have the ability to identify any saw that is not cutting or has not been cutting for a period of time. Once these machines are identified, an understanding can be reached in regard to why it has not been cutting and the issues can be addressed appropriately.

“There are also shop floor monitors that help operators see quickly if a saw is cutting, when the job on the saw is nearing completion or if a saw needs a new job started,” he says. “The dashboards provide this information very quickly and will help a facility limit downtime.”

The dashboards are available on laptops, tablet computers, smart phones and desktops. There is also a monitor on the computer tower where the sensors are connected. All the data is immediately available once it is pushed to the cloud, either through a Wi-Fi connection, ethernet connection or by utilizing a SIM card. This gives operators and managers the ability to remotely tap into the program and see how a machine is operating in real time.

Operators can also go to the computer where the sensors are connected and scan in the bar codes associated with each part order. All the information about the order is automatically uploaded to the company’s ERP system, which adds another layer of visibility into tracking individual orders, production status and job status.

According to research carried out by Lenox, most factories lose 5 percent production capacity from downtime and some lose up to 20 percent. Lenox also estimates that 80 percent of industrial facilities inaccurately estimate downtime and underestimate their downtime costs by 200 to 300 percent.

It’s not unusual for shop managers to be in the dark about what percentage of capacity they are operating. Without the proper data or means to analyze data, there is little chance that they will know if they’re running at 30 percent or 80 percent capacity or anything in between. Lenox 360 adds insights that make it relatively easy to determine capacity.

“By capturing data in relation to utilization,” Fernandes says, “a facility will know if their saws are running. It’s also crucial to understand if the facility is running its jobs efficiently. If a facility is running at full utilization, but they can improve cut times and cutting rates by changing blades or using optimized parameters, they can increase their capacity without having to add new machinery. Lenox 360 can provide a solution for both scenarios.”